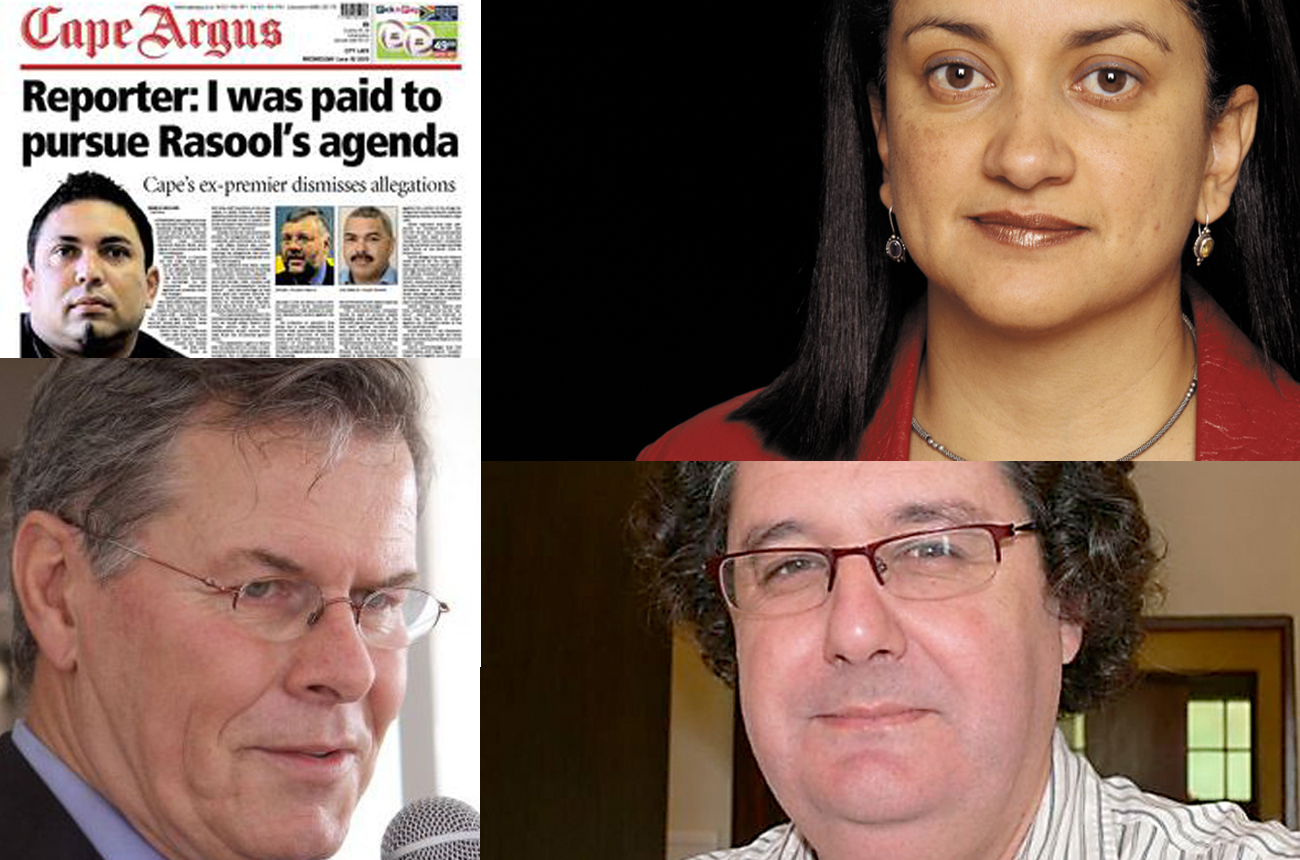 In the wake of the Cape Argus “embedded journalist” scandal, newspaper editors and media experts say credibility in journalism can only be assured if corrupt journalists are exorcised from the profession, now.

Ashley Smith’s confession bristled through South Africa’s media community this week forcing local editors to witness what must be every editor’s nightmare unfold for the Cape Argus. Smith’s payola journalism on behalf of former Western Cape ANC premier Ebrahim Rasool raises crucial questions for the country’s news media. Is the Smith/Rasool incident an isolated case? Has public trust in journalism been significantly dented? Are editors doing enough to ensure political interference or corruption never happens on their watches? The Daily Maverick gets some viewpoints.

“The Cape Argus issue has affected journalism very severely. If we don’t clearly act to stop this kind of ‘brown-envelope’ journalism, the impacts will be devastating,” said Anton Harber, Caxton Professor of Journalism and Media Studies at Wits University. “Journalists as a whole have to make clear that anyone associated with corruption isn’t welcome in our ranks, and we have to push hard for Ebrahim Rasool to be investigated and if necessary disciplined. It is a question of the ethic and culture of newsrooms. The temptation to corrupt is always there, but the only way you can stop it is with zero tolerance,” he said.

The so-called “embedded journalism” scandal became big news when former Cape Argus political journalist Smith declared in an affidavit handed to the National Prosecuting Authority that Rasool, campaigning under the ANC banner, had been involved in paying journalists to discredit his and his party’s political enemies and garner positive publicity. Rasool is about to take up the post as South Africa’s ambassador to the USA, though the DA has demanded his appointment be put on hold. Also implicated by Smith is former Cape Argus political editor Joseph Aranes. The story of Smith’s confession appeared on the front page of the Cape Argus, but was first reported by the Mail & Guardian as far back as November 2009.

“What’s very worrying for me on a broader political level is the growing tendency for politicians to want to buy their own PR,” said City Press editor Ferial Haffajee. “We saw this in the CNBC Africa saga where the provincial government of Paul Mashatile supported and funded CNBC Africa. “At numerous provincial levels you hear these stories of payola coming out where journalists are either given gifts, money or are running consultancies on the side on behalf of government,” said Haffajee, who added her work as a judge in CNN African Journalist of the Year Awards has yielded evidence that this kind of corruption is rife in Africa. “I am truly alarmed each year when I see just how widespread corrupt journalism is because of payola. Journalists are either in the pay of this faction or that faction, and that is because they are paid so little and journalism is increasingly seen as entrepreneurialism rather than journalism. I was hoping we could avoid that trend (in South Africa), but it seems to me we are slap bang in the middle of it.”

“The structural reason for this happening on the continent is because the media sector in Africa is quite small and fractured so cash flows are low. People don’t get paid a salary in the way that you and I understand it. Money comes in intermittently and when it does it is pathetically little. Increasingly, journalism is just seen as a way of making money or disguised PR. People are on contract and feel insecure, so it is a small stepping stone into PR or corporate affairs,” said Haffajee.

“At home (in South Africa) there is much more job security and because of this we are not quite so far down the line. As a profession and through our industry bodies, we need to draw up charters that are very, very clear. I think that it is a no-brainer. Journalists cannot consult to government and then be putting those stories into their own media beat online, or print or anywhere else. You would think it was obvious, but the Ashley Smith incident shows us it is not.”

Haffajee said that in the Naspers group CEO of Media24 Francois Groepe had asked for editorial thinking on how corruption in journalism could best be dealt with, and what charters or codes of practice needed to be implemented so that the rules in the group were “exceptionally clear”.

Haffajee added that the issue of “embedded journalism” wasn’t isolated to the Cape Argus. “Vusi Mona was running a company on the side when he was City Press editor, although he was found innocent of using his editorial position to advance his corporate interests. I think there are more than enough examples to make us pay attention and think about these issues.” Mona subsequently moved on to the presidency and is currently deputy director-general for communications in Jacob Zuma’s office.

Beeld editor Tim du Plessis said a few years ago a motoring journalist was fired from Media24 because he was moonlighting as a copy writer for a motoring company. “Journalism always takes a knock when something like this happens, but it is not something that you can prevent. You always get ‘vrot’ (rotten) apples in every basket. However, editors must constantly remind staff that they are not allowed to do anything for payment outside of their employment contracts. Journalists must guard their impartiality,” said Du Plessis. “There is no way we can point a finger and say, ‘Poor Cape Argus, fortunately that will never happen to me’. In a sense we are all responsible because we are a fraternity and journalists move between different groups. As a fraternity of journalists we must share the lessons learned.”

Business Day editor Peter Bruce believes the Cape Argus can recover from the crisis if it is diligent. “Papers have recovered from worse. Look at the American papers where journalists have made up sources or invented whole stories. What you do when you are in (such a) situation is to admit your guilt as soon as you can, beg forgiveness of your readers and advertisers, and produce the next edition. Journalists are always vulnerable to manipulation, but for the most part we come out very well, a lot better than other professions – say now for example politicians,” said Bruce. He added that as editor of Business Day he had a zero-tolerance approach to corruption. “If one of my staff did something like that, I would fire first and face the Employment Act second.”

Du Plessis believes the Cape Argus can restore its lost trust, but that it will take time and diligence. “If you have a situation like the Cape Argus incident, to paraphrase the great Ben Bradlee, you eat the whole carpet as quickly as possible. You confess, put everything on the table and accept that you will be ridiculed and humiliated, but move on. It is very painful for editors, journalists and media owners to admit wrongdoing because our credibility is the only thing we really have. You can rebuild your credibility – look at the great Washington Post after the Janet Cooke scandal, which was massive. The Washington Post got a Pulitzer Prize for a totally manufactured story and managed to recover from that. However, you must be very diligent and make sure you don’t repeat the same mistake.”

Independent Newspapers was slammed by media analyst Wadim Schreiner who said the group had not been at all effective in dealing with the crisis. “The incident is one of the worst things that can happen to the reputation of a newspaper,” said Schreiner, MD of Media Tenor. “Independent journalism is built on credibility and, if that credibility is shaken, there is very little left to a medium to set any type of agenda.”

Harber agreed and said Independent’s silence on the matter was disconcerting. “Independent Newspapers has held an unfortunate silence, and one would hope the group would publicly back its editor in terms of forcibly dealing with this to ensure it is not happening in any of their other newspapers.”

At a time when newspaper income is under threat from a decline in advertising and the pressure of social networks, media that breech public trust will lose a lot more than readers or advertiser confidence.

Today, it is social networks on the Internet that seem to increasingly break news and their influence is demanding differentiated reporting from their print counterparts. Setting the media agenda, investigative journalism and credibility are crucial to the survival of print. What print news brands have going for them are legacies of trust built up over long periods. These brands need to be protected through impeccable journalism by unimpeachable journalists if they are to contribute to print’s survival.

#Budget2020: DIY tax clock shows you where your contributions go