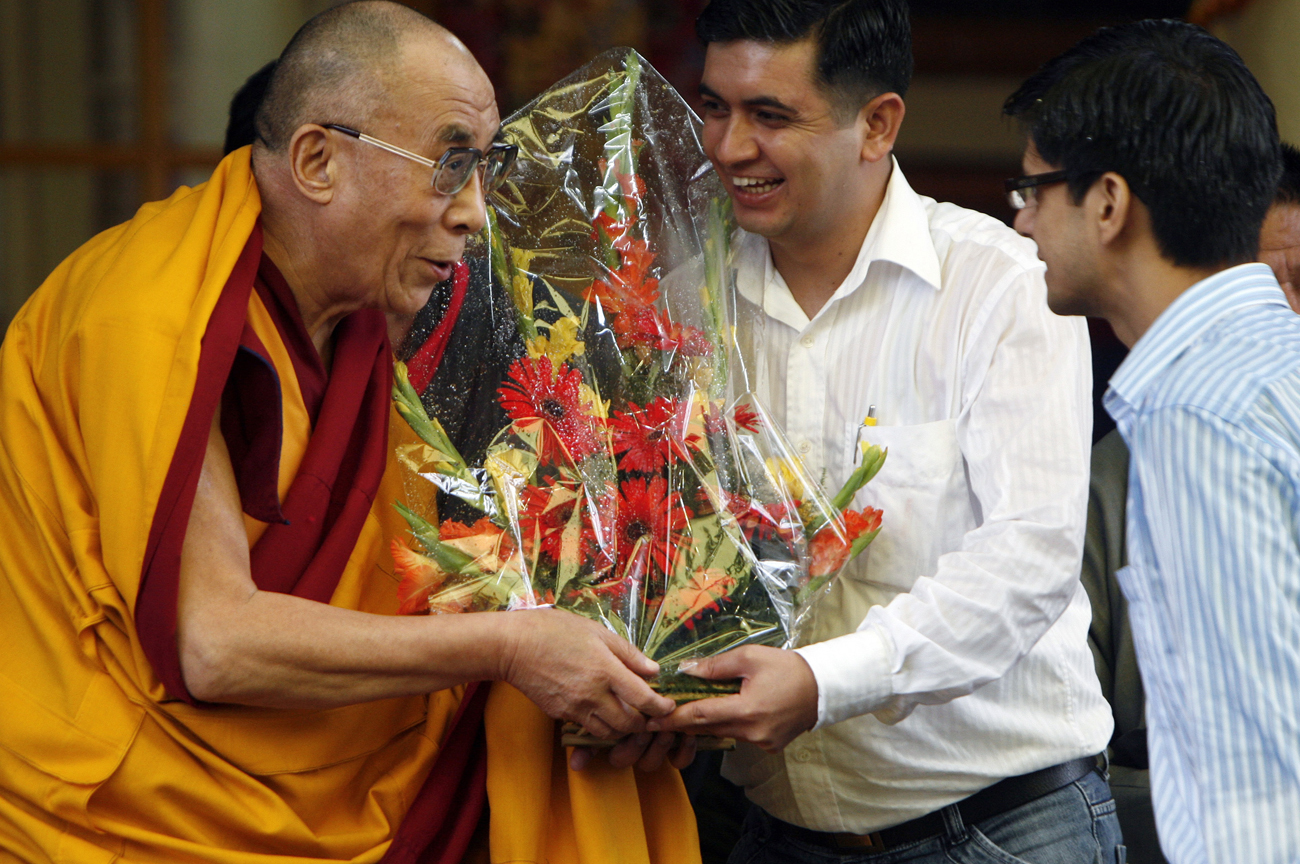 While the World Cup delays local festivities to mark the Dalai Lama’s 75th birthday, his envoy says South Africans should celebrate by studying His Holiness’ teachings on moral and ethical values to build a better and more peaceful world.

Jetsun Jamphel Ngawang Lobsang Yeshe Tenzin Gyatso, better known as the 14th Dalai Lama, enjoyed a modest celebration in exile in Dharamshala, India, to mark his 75th birthday on 6th July. A few hundred followers lined the streets of the northern Indian city the Dalai Lama has called home after fleeing Tibet following a failed uprising against China in 1959 – nearly half-a-century ago. Drums and flutes were sounded, and His Holiness watched a display of dancing and singing. AP reports that Lobsang Tenzin, the Tibetan prime minister in exile (Samdhong Rinpoche), raised the Tibetan flag as the anthem was played.

Earlier Reuters reported that the Chinese government didn’t keep track of the Dalai Lama’s birthday. When asked about the matter Chinese foreign ministry spokesman Qin Gang told the news service he didn’t keep track of the Dalai Lama’s age and urged people to rather remember other dates. “I can only remember two dates,” said Qin. “One is 28 March 1951, which was the day of Tibet’s peaceful liberation, the other is 23 May 1959, when Tibet began its democratic reforms.” The spiritual leader of the people of Tibet and head of Tibet’s government-in-exile is viewed as a “dangerous separatist” by the Chinese rulers who insist Tibet historically belongs to China.

Since fleeing Tibet, the Dalai Lama has dedicated his life in exile to petitioning for autonomy of Tibet, although as Sonam Tenzing explains this doesn’t mean separation from China. “Tibetan people including His Holiness the Dalai Lama have been demanding genuine autonomy for Tibet in line with the constitution of the People’s Republic of China,” said Tenzing. “The Tibetan people and His Holiness are not against the Chinese people. What we are demanding is autonomy which is currently not available or not genuinely implemented and practiced inside Tibet. His Holiness is not demanding separation from China. The Tibetan people’s struggle for freedom is not something that is against the constitution of China.” In South Africa, the Dalai Lama’s birthday celebrations were put on hold because of the Soccer World Cup. “We will be marking his birthday on the 9 July,” said Tenzing. “Normally we would celebrate on the same day, but because there are these soccer matches and people are more interested in watching the soccer matches than attending a function, we thought it appropriate to hold the event on Friday.” The local celebrations will also be modest and will include lunch for a small number of guests, the raising of the Tibetan flag and singing the national anthem.

The Dalai Lama has travelled to South Africa on a number of occasions, though he was denied a visa in March 2009 when he was due to participate in a peace conference alongside Nelson Mandela, Desmond Tutu and F W de Klerk. The conference was linked to the World Cup and, despite denials by the Motlanthe administration that the decision was made to appease the Chinese government, it was later cancelled. Tenzing says things have changed somewhat under Zuma’s administration. “In May 2009 the new minister of international relations and cooperation Maite Nkoana-Mashabane made a statement to journalists which said His Holiness the Dalai Lama was just as welcome as any other tourist visiting South Africa. His Holiness has expressed in the past that he would like to visit countries of Africa, including South Africa, because of the fact that Nelson Mandela, Desmond Tutu and F W de Klerk have known him and been good friends of His Holiness.”

How would the Dalai Lama like South Africans to celebrate his birthday? His South African envoy says people should focus on moral and ethical values. “Our message to the people of Africa and our brothers and sisters in South Africa is that they should study the thoughts and teachings – though not necessarily religious teachings – on moral and ethical values that have been promoted by His Holiness the Dalai Lama throughout these many, many years. He has been travelling throughout the world promoting ethical and moral values for a better and more peaceful society.”

The reality of the 21st century world is that the Chinese political machine sees it fit to twist the arms of the world’s governments, forcing them to reduce the status of the Dalai Lama to that of a mere tourist, after seizing his country by force and conducting 60 years of population engineering that today sees Chinese outnumbering ethnic Tibetans in their own country. Governments may be bullied, but the truth remains: The people of the world love the Dalai Lama.