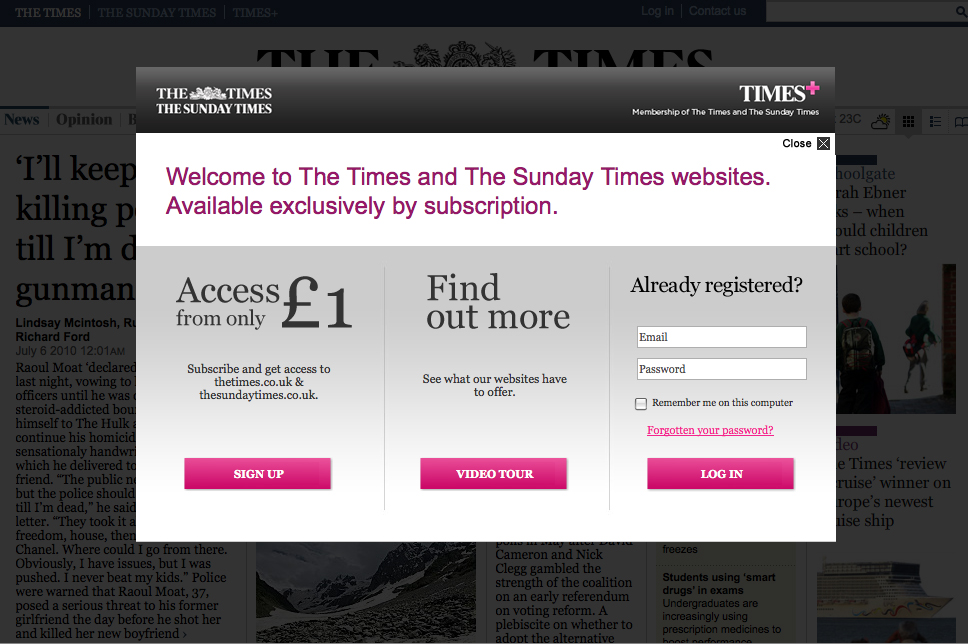 Political leanings aside, and even with Jeremy Clarkson on side, The Times is going to have a hard time competing with other online writing that is smart, funny and – most importantly – free.

It’ll take at least a few months for News Corporation to figure out if implementing a paywall around TheTimes.co.uk was a good idea. That it took The Guardian all of one day to start pointing and laughing is no surprise.

As of 1 July, Rupert Murdoch’s The Times and The Sunday Times became the latest guinea pigs in the online paywall experiment, with readers having to stump up £1 for a month’s access. Well, that’s the special for the first month – prices will rise steeply from August, with £1 only buying you a single day’s access, or £2 getting you a full week’s subscription.

But, £1 or £2, a day or a week – it’s all pretty irrelevant. Because the consensus on whether the paywall strategy will pay off is that it won’t (apart from limited cases where the content is seen as truly worth coughing up for, like the Wall Street Journal – although there’s another story in there too). And you have to take the “video tour” of the new Times website (a bit like dancing about architecture, we think) only once to realise that The Times certainly doesn’t fall into this category.

We’ll save you the trouble of doing so, as there really are better uses for your bandwidth, especially when Seacom is already struggling. In summary, the promo video features a whole lot of hacks banging on about how wonderful it is to be a journalist, and what exciting opportunities the Internet offers. It pays homage to The Times’ past innovative uses of its online platform, which include a video of columnist Caitlin Moran getting to be “made Beyoncé” (don’t ask), and writer Ben McIntyre bringing you cutting-edge footage of the back of David Cameron’s head.

We wish we were joking, but we’re not. And the number of times the video mentions that you’re now going to have to pay for the privilege of accessing this all-important information? None. That’s right – not one.

Compare this with John Crace’s satirical blog post welcoming Times readers over to the delight’s of The Guardian website, and there’s no doubt which approach is fresher, more honest and more likely to win readers over, whether they have to pay or not.

Where The Times is deadly serious about the Web being “the biggest news in newspapers”, The Guardian is not above poking fun at itself: “We’re not going to try to hide the fact that on certain – make that all – issues we tend to be the teensiest bit liberal.” Where The Times tries to suck up to its readers (“They’ve really transformed [online discussions], the readers, by the intelligence and the, uh, sharpness of the questions they’ve added,” oozes Bronwen Maddox), The Guardian wryly suggests that not all readers will appreciate all of its content: “To make you feel right at home, we run a selection of interminably dull pieces by the great and the good that no one, but the commissioning editor ever finishes… But if you stick with us, you’ll soon work out who they are and stop reading them for yourselves.” Where The Times’ promo video is as cringe-worthy as anything scripted by David Brent, Crace gets his readers to laugh with his newspaper, not at it.

At the end of the day or rather, the middle of a lazy Sunday afternoon, there’s only one reason Times readers just might be willing to pay for access to the newspaper’s Internet portal, and that’s to read Jeremy Clarkson’s Sunday column. But they might not have to go that far. Instead, they could always check out The Guardian’s parody:

“What’s the point of Norway? On the night I stood having a cigarette outside Lillehammer’s equivalent to Piccadilly Circus, I didn’t see a single car. I felt like a lonely fat poof hanging around outside a public lavatory, while my friends George and Michael were inside getting it on with an Eskimo in salmon-pink, reindeer-skin chaps. And talking of which, here’s the Mazda MX-5, the gayest car ever built.”

It might be written by John Crace, rather than Clarkson, but hey, it’s free. Okay, we admit it’s not quite as funny as the original (even though we did laugh out loud), if only because Clarkson ripping off Norway and Mazdas is a different category of humour from someone else ripping off Clarkson.

But, wait, you don’t have to do without the original, and you don’t have to pay either. All you have to do is convince a sucker (um, friend) who already subscribes to The Times online to mail you a copy. Sure, sending a link won’t work, but c’mon, it’s called copy + paste. Of course, we at The Daily Maverick are in no way advocating this behaviour. But until The Times, or any other Internet publication that puts up a paywall, finds a way to prevent such dissemination (and the CIA hasn’t cracked it yet), charging readers for content simply isn’t going to work.

Read more: John Crace’s blog for The Guardian, The Guardian, BBC News, The Sunday Times. Take a video tour of The Times website (don’t say we didn’t warn you!)