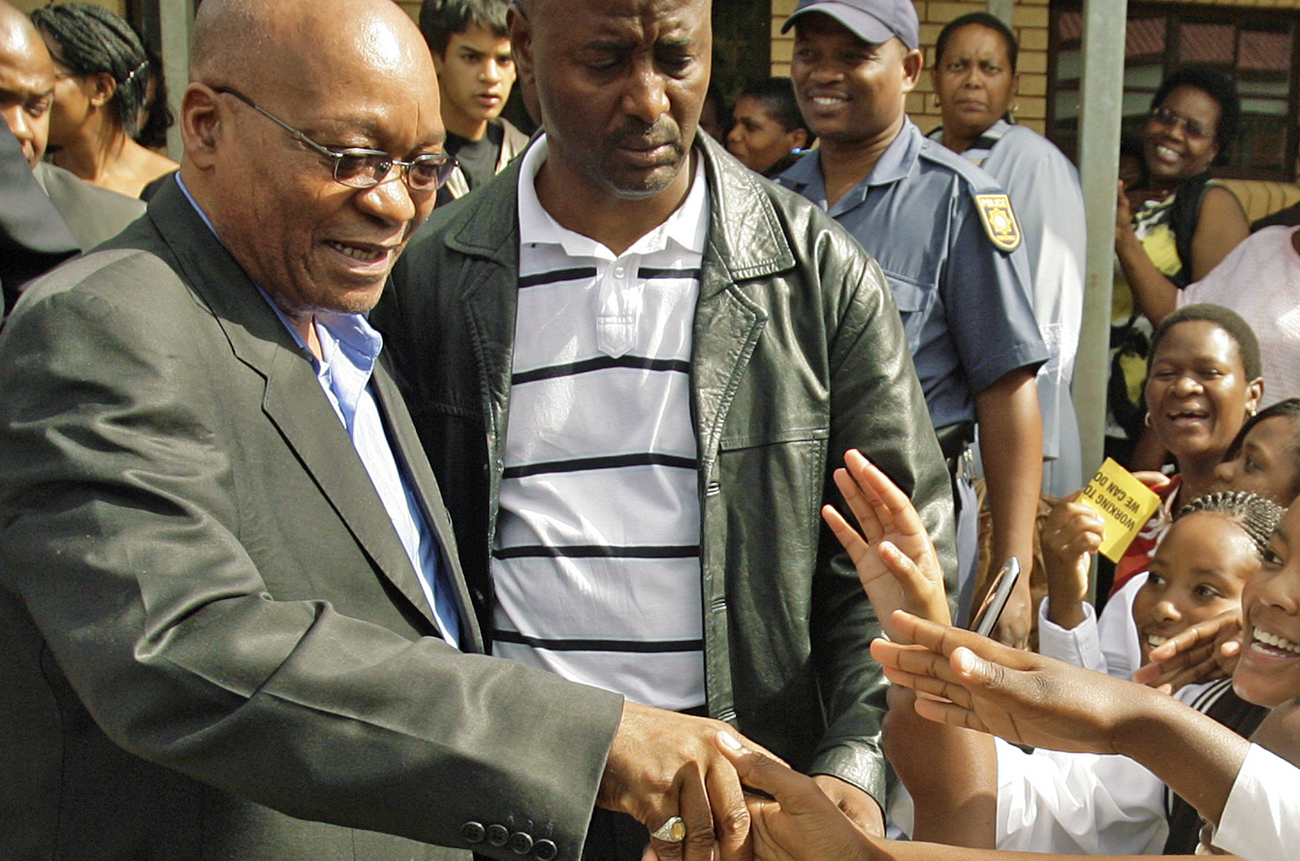 It’s becoming a bit of a tired trick - President Jacob Zuma wading into a squalid neglected area and getting mobbed for the cameras. Back when he was under real political pressure, it worked okay. We're not sure it’ll work forever, though.

Just after his disastrous state of the nation speech, Zuma did the rounds at the odd taxi rank here and there. And it seemed to help in the national executive meeting that followed. You remember – the one where Zuma made sure everyone knew he was the guy in charge.

Well, that was six months ago and those questions are being asked again. Either way Zuma likes a good natter with his people. It’s seldom if ever bad to be the one cutting the big red ribbon around the house for the elderly man on crutches. On TV, of course. But this time, the old magic seems a little threadbare.

It was pretty cold, with a bitter wind. And the Sweetwaters-Walkers Farm area is probably the poorest in Gauteng. They’re the poorest people getting to see the richest people in the country. So it’s a place where there is very little, and thus very little hope. To put it another way, there’s no electricity, and so the World Cup just passes them by.

This is the kind of place that’s ripe for a booing session at the President. There were some small children holding up placards saying “ANC, why do you starve us?”. We don’t know where the placards came from, and certainly adults had been involved. There were only three or four, but still, you wouldn’t have seen that anywhere near Zuma a year ago.

But it was in the big marquee brought in especially for the occasion where things were more interesting. There, about 500 residents, probably feeling more sheltered than they had for some time, were not happy when he wanted to leave. They weren’t disrespectful, but they weren’t happy either. They wanted him to listen to more of their problems. Zuma had to politely remonstrate with one or two of them before he left. Afterwards he made light of it, saying that he’d convinced them he knew about their problems, as he had been there earlier in the year. Well, he was – back in May, but only for about the duration of a soccer match, with no extra time.

However you look at it, the Zuma brand of magic – him waving his wand of verbal dexterity at poor people and saying “It will all be fixed soon” – is being seen through for the conjuring trick it is. The situation is ripe now for a political opponent to organise in communities such as these. Don’t be surprised if, just before the ANC’s national general council, you see a mass booing of Zuma somewhere. It may be real anger. It may be someone stirring.

You may think that having a huge marquee for a meeting such as this is a waste of public funds. Prima facie you may have a point. But there is no other way to go in winter. It’s a dusty dirty place, with corrugated iron and mud everywhere. Government had also made sure they got their money’s worth. There was a mobile home affairs office, with satellite dishes and everything (and not for DSTv either, but actually to check ID numbers), and a couple of other mobile facilities for residents.

Earlier, Zuma had popped in to Walkers Farm. There he’d handed over a couple of houses built by the African Musicians Against HIV/Aids to elderly people. Somehow, the SABC is hugely involved in this. Its new boss Solly Mokoetle was there, giving a speech and all. He stayed very close to Zuma too. Whether that means anything though is difficult to know, but we reckon he has Zuma’s support. So watch out the SABC Board. But the part that left us slightly aghast was the place where the speechifying took place.

On a small patch of land, someone had set up a huge dining area, with smart tables and chairs, gas heaters and waiters and Appletizers and tablecloths. It was luxury, the kind of set-up you get at Moyo’s on a cold winter’s night. Amid a forest of corrugated iron. We don’t know who paid for it, whether it was the SABC, or the musicians or someone else. But you could have built another house for what it cost. It was in terrible taste. Someone should have known that that’s just wrong. But we know by now not to expect the best financial decisions from Auckland Park.

In the final analysis, presidents around the world do this kind of thing. It’s a photo-op more than anything else. Here, it should have real juice, the president with the down-at-heel. And he really does it well. But he shouldn’t surround himself with so many of the highly well-heeled who seem to follow him to these things. They just look silly stepping around the dust, trying not to trip in the dirt.