The Dutch stun Brazil, banish them to World Cup exile

The Dutch stun Brazil, banish them to World Cup exile 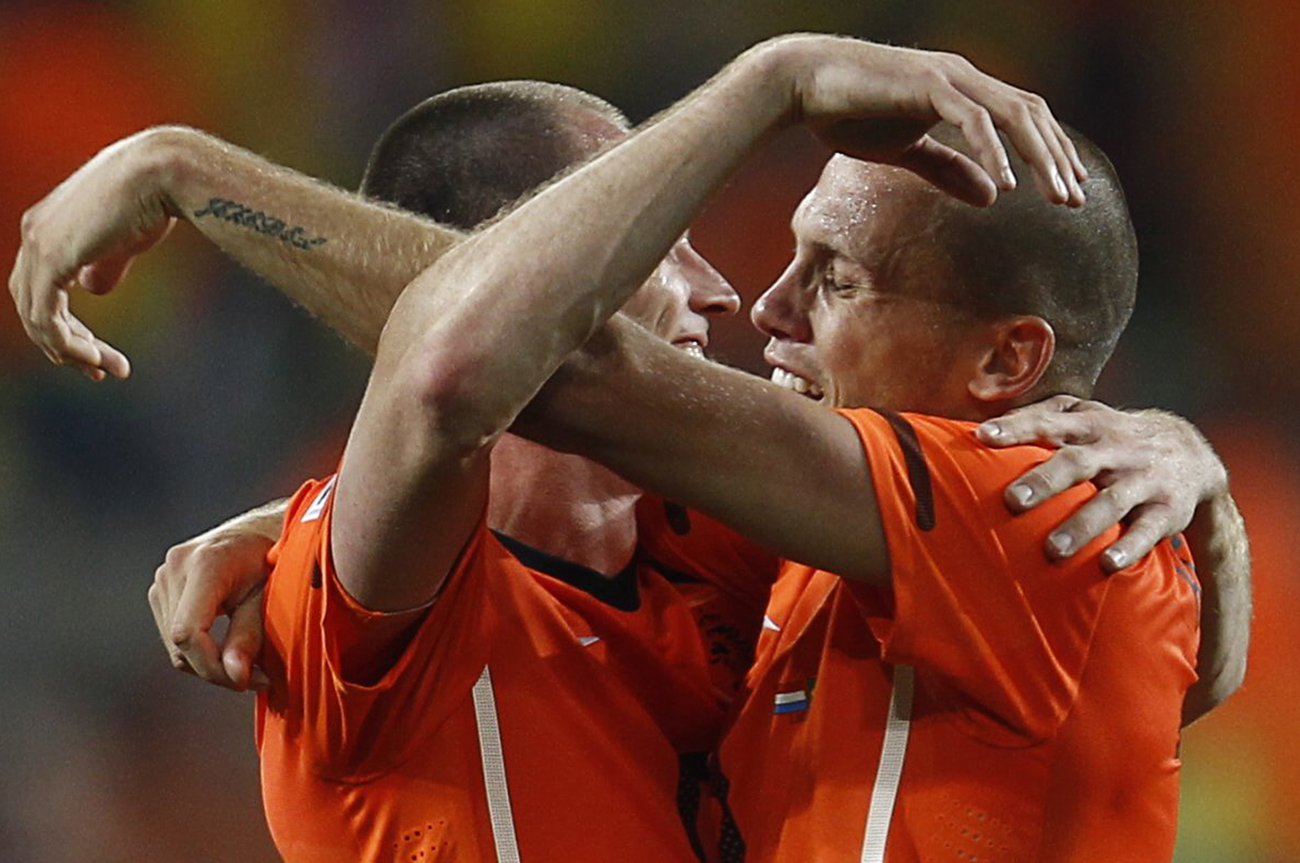 The Nelson Mandela Bay stadium saw a great upset on Friday, as the Dutch capitalised on Brazil’s mistakes and plunged the World Cup 2014 host country into deep mourning. An important match it might have been, but great match surely it wasn’t. It ended Netherlands 2, Brazil 1.

The Dutch have the honour tonight of being the first country to reach the World Cup semi finals. In the game against Brazil, once again they have proven what we’ve been saying all along: they are a tough team to play against. Their strategy evolves around fighting for each and every square inch of the field, upsetting their opposition by every means available and then using the breaks to create scoring chances. And once they are up front, they use every bit of trickery and deadly counter-attacks to increase their margin. It’s not good-looking football, but there’s no doubt that it’s effective.

Many a Dutch supporter is grateful today for the existence of Arjen Robben and Wesley Sneijder. Robben for upsetting the Brazilian defenders so constantly to force the replacement of Bastos and Felipe Melo’s red card (as well as the majority of fouls in the match); Sneijder for being there when the goal scoring was necessary. Their defence felt rather wobbly in the first half but firmed up and managed to push South Americans away in the second. They are also probably making totems dedicated to their heroic goalkeeper, Stekelenburg, who more or less single-handedly kept them in the game during their first-half fight for survival.

From their side, Brazil totally outplayed the Dutch in the first half, only to push the self-destruct button in the second with Cesar’s inexplicable mistake that led to the orange equaliser. It was almost sad to watch the great team fall apart so publicly, but the combination of tough Dutch players and their own inability to deal with being behind has proven to be too much for them. As we’ve said before, Dunga is not a man that should be the Brazilian coach. He is intellectually and emotionally not up to the task of leading the greatest footballing nation in the world. Dunga’s reactions are more suited to a junior player in the Italian Third League than a man who Brazilian stars need to look up to. We genuinely hope Brazil’s bosses realise that and choose someone who the players would walk on coals for. World Cups are won by people like that and 2014 beckons.

The Dutch will now face the winner of the Ghana-Uruguay match in the semi finals and stand a good chance of taking their brand all the way into the finals. Their corporate approach is not something we like, but then again, results are the only thing that matter. Sadly enough.

Here are the reporter’s notes

Both teams are fielding just about their strongest teams, but minus a few players. Brazil is missing Elano (injured) and Ramirez (suspended), while the Dutch are bleak about missing Joris Mathijsen in defence, after he picked up an injury while warming up. He’s replaced by André Ooijer. On Thursday, the Dutch coach Bert van Marwijk publicly confirmed the rumours of strife and general animosity among the Dutch star players, but explained that it didn’t impact the team performance. And he is greatly encouraged by Robben’s complete recovery and his second start in a row.

It looks obvious that both heavy rains and heavy use have exacted a toll, and Nelson Mandela Bay Stadium pitch doesn’t look very good. The Dutch find themselves in an unknown situation: for the first time at this World Cup, they are behind and will probably have to throw away their usual calculated style and do their best to attack and equalise. They have the quality: we will now see if they have guts to do it.

The noise on the pitch is deafening. End of the first half. The Dutch were completely outplayed by the rampaging Brazilians.

The Dutch have pushed Sneijder up front, right next to van Persie. They more or less have no other choice if they are to do something about reaching Brazil’s net. The problem is, they are emphatically the junior partner in this dance.

Is this going to be another World Cup performance where Brazil is undone by their defensive errors? The stupid goal they allowed appears to have taken some of the wind out of their sails. The game is set for a boiling last 20 minutes of regulation time. Brazil will attack with all their might and the Dutch will defend with all their trickery – expect them to button down. Time for the connoisseurs to savour – if you’re not a Brazilian or Dutch citizen. Brazil, demoralised and with 10 players, is lacking the oomph to enforce one of their trademark comebacks. It looks grim for them.

Brazil will not score more goals tonight. No ways. The Dutch are much more likely to slice the one past Brazil’s suffering back four.

Brazil now throws in all they have.