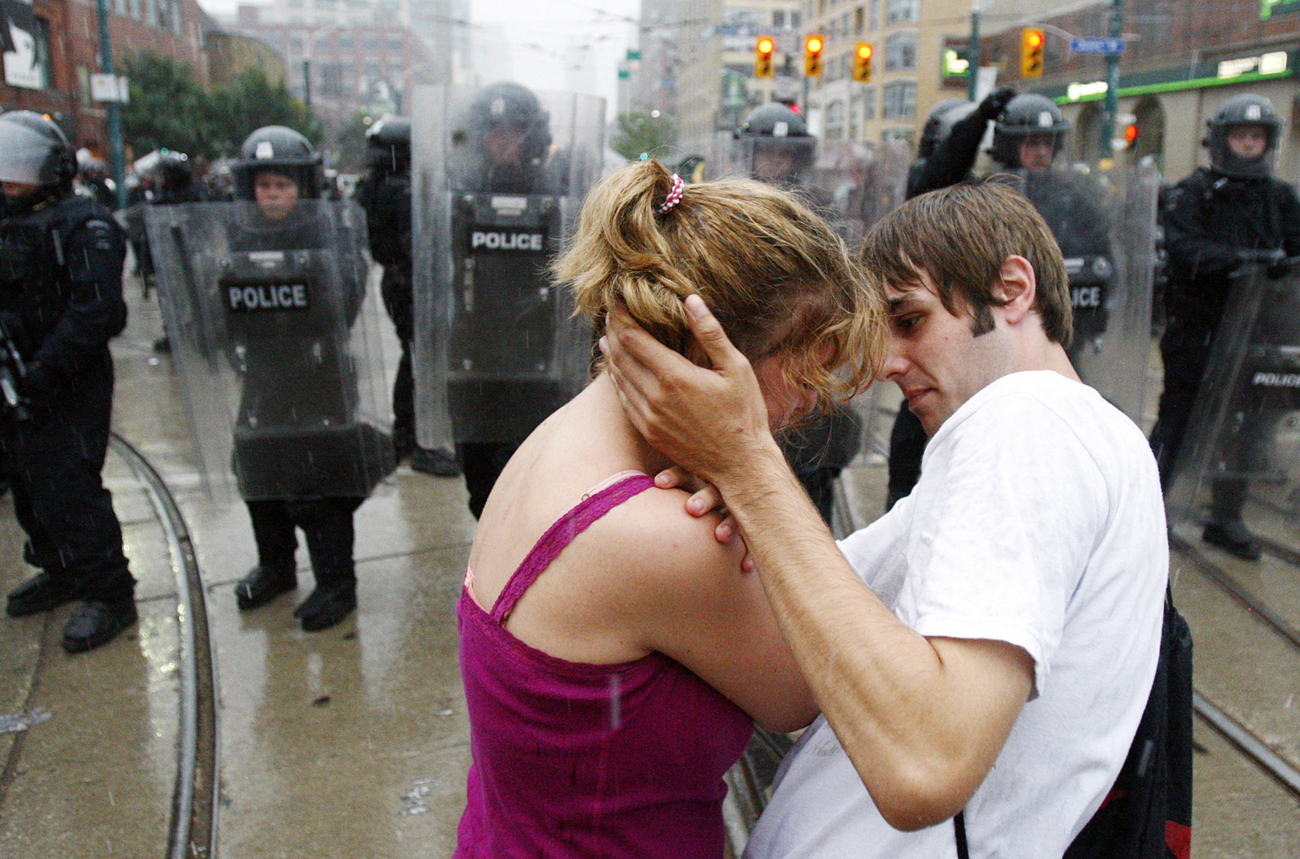 The G20 protests in Toronto, and the abysmal failure of that city’s security forces to maintain order, throws an intriguing light on the World Cup in South Africa, and our major city’s relative calm. Is it all about the consent of a citizenry to be policed?

It’s a city that hasn’t seen the likes of this since the early nineteenth century, when, during the War of 1812, the Battle of York ended in its plunder and capture by American forces. Back then, American soldiers set fire to the parliament buildings and spent five days looting and pillaging and generally behaving like college sophomores on spring break. On Saturday and Sunday, after almost two centuries of peace and prosperity, the Americans indirectly visited more mayhem on the town – if the most powerful nation on Earth didn’t want the G20 summit to be held there, none of this would’ve happened.

Toronto, which took its original native name in 1834, the year slavery was abolished in Canada, was a war-zone on the weekend. Security for the G20 summit was provided by over 19,000 law enforcement officers, most clad in Kevlar vests and protective visors, and almost all as serious about their jobs as they looked: 600 protestors were shackled in plastic handcuffs and taken away in impressive police vehicles to specially constructed holding cells.

Sure, four police cars were torched and a couple of store windows smashed by a few thugs who broke away from the main (peaceful) protest, yet the consensus amongst citizens was that the security presence was not only excessive and ineffective, but invited the violence in the first place. On Sunday, Toronto police admitted they had never before used teargas until Saturday’s clashes with the anti-globalisation protestors. And on Monday, an editorial by publisher John Cruikshank in the Toronto Star, the city’s leading daily, captured the mood:

“Canadian authorities knew that this overweening show of paramilitary hubris would draw the violent dregs of nihilism from around the world,” wrote Cruikshank. “Previous summits offered stark and certain warnings. Given that, the attempt to provide security for the city and its inhabitants has been a sad and disturbing failure.”

In Canada’s top literary magazine, The Walrus, there was an arguably more insightful piece – and one with a direct link to Johannesburg. Writer and journalist Richard Poplak, who left Joburg for Toronto at the age of sixteen and is back temporarily to cover the World Cup for the Canadian press, drew on the work of Jonny Steinberg, specifically the book Thin Blue: The Unwritten Rules of Policing South Africa, to unpack events and draw a surprising comparison.

Arguing that good policing rests on an unwritten agreement between a city’s authorities and its citizens, Poplak quoted what is perhaps the defining sentence of Steinberg’s book: “The most important precondition for policing in a democratic society is the consent of the general population to be policed.” He noted that in Johannesburg now, with the World Cup having shifted not only the mood of the city but the attitude of the populace to its police force, there is an almost unprecedented sense of order and civil calm. In Toronto, he suggested, where that city’s recent violence is equally unprecedented, the opposite is true.

Wrote Poplak: “For the meantime, and in the context of the Cup Finals, many South Africans have made that deal. (I’m speaking here as much about the wealthy as the poor; contempt for the police is the one South African universal.) In a city as ordinarily violent as Johannesburg, calm, of a sort, now prevails. The road to the stadiums and the fan parks take visitors through areas of the country otherwise untouched by the sheen of the tournament; the consent is thus broader than it is narrow. That SAP are policing Soccer City due to the largesse of South African taxpayers… may turn out to be a good thing, in as much as paying for anything twice can be considered a positive. Private security guards could not transfer the knowledge they accumulate during these games into an agency of democratic government. A police force can.

“Is this temporary consent something that can be leveraged into a larger social transformation? It’s too soon to say. Certainly, South Africa’s poor aren’t thronging into stadiums to watch World Cup games; they don’t get to see their smiling martinets in new uniforms. But the police themselves are being recultured, as are certain sections of society. This is how social transformation starts. In increments.”

It’s an intriguing idea, especially when considered against its flipside – the inherent dangers when a community over-consents to being policed. Torontonians had effectively allowed their city to come under lockdown, their streets to be segmented, and their institutions to be closed. Owning no collective memory of how police power can be abused, they trusted the men and women tasked with protecting their security to do the right thing. They were badly let down. Joburgers, on the other hand, should remember what an unhinged police force is capable of.

Read more: John Cruikshank in the Toronto Star, Richard Poplak in The Walrus

Photo: A man comforts his girlfriend as police officers close in on a crowd of G20 protesters, making individual arrests in downtown Toronto June 27, 2010. Police in Toronto fired tear gas on protesters for a second straight day on Monday as new violence surrounding the G20 summit erupted and the arrest tally climbed toward 600. REUTERS/Christinne Muschi