The problem with photographing 'poor whites'

The problem with photographing ‘poor whites’ 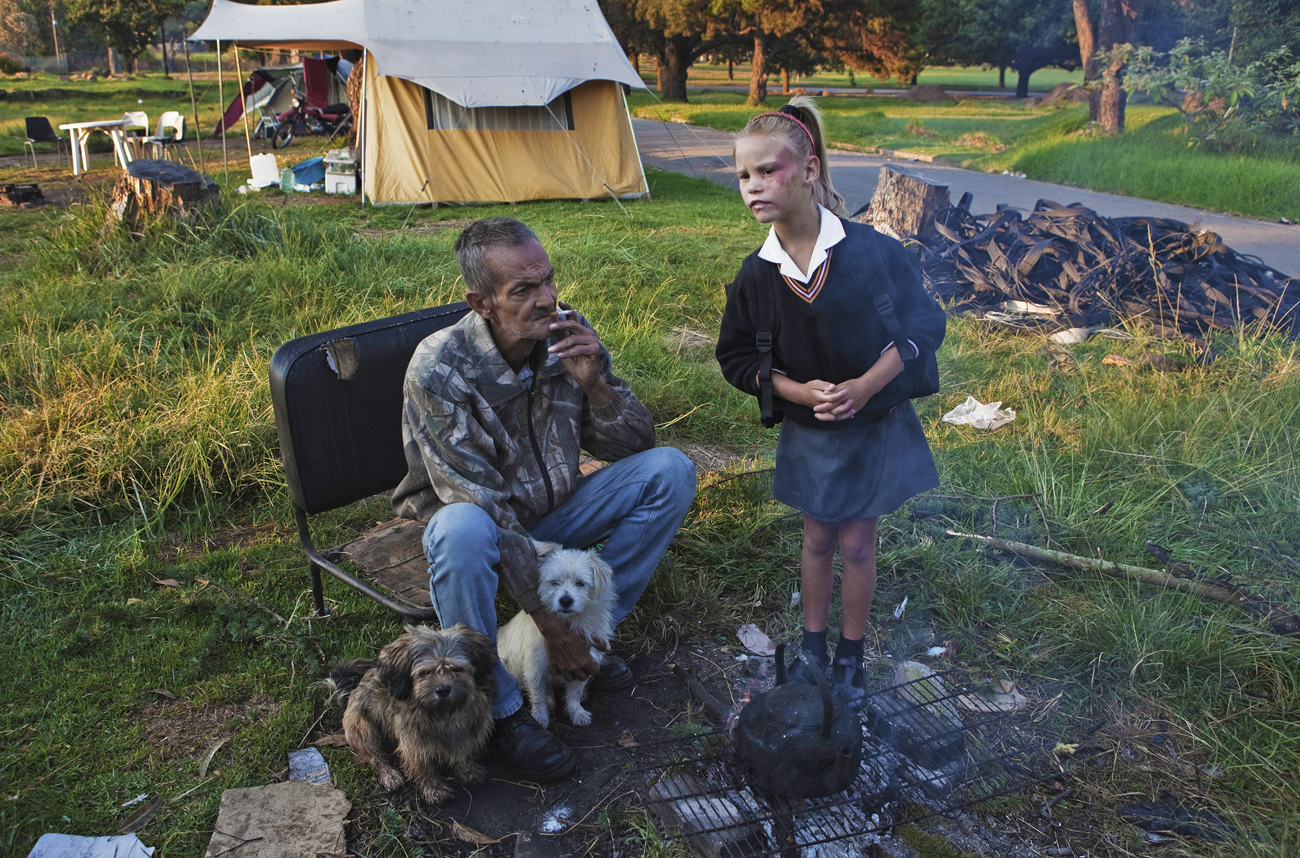 The driving idea behind Finbarr O’Reilly’s photographic essay on white poverty in South Africa, published this Friday in the New York Times, is that race shouldn’t have a voice in the conversation. In some of the photographs he manages to achieve the ideal: the barefoot schoolchildren walking past a pile of litter; the woman living with her family in a wooden toolshed; the caravan park with its tragic flower gardens. But it’s in the image of the long queue at the food truck that O’Reilly’s ambition comes unstuck – the people handing out the food are black, the supplicants, with their weather-beaten faces and ill-fitting clothes, are white.

It’s this reversal of stereotypes that is by definition where O’Reilly’s essay finds its power, and while the goal of subverting race in South Africa is a noble one, there’s a sense in which it appears disingenuous and naïve. “It doesn’t really matter what color it is,” O’Reilly, a 39-year-old Canadian and former winner of the World Press Photo of the Year, told the New York Times. “It’s an issue that really is quite urgent right now in South Africa.” Photo: Residents of a squatter camp for poor white South Africans line up for a communal meal at Coronation Park in Krugersdorp, March 12, 2010. REUTERS/Finbarr O’Reilly

The first quoted sentence is where the confusion resides. Are we talking in general terms or are we focused on South Africa? The New York Times report that accompanies the 19-photograph series doesn’t make clear what the “it” is that O’Reilly’s talking about, but from the context it would seem that the theme is poverty – without the qualifier of “whiteness” attached. Still, would we – or the editors of the New York Times – care about the photographs if their subjects weren’t white South Africans? And, to problematise O’Reilly’s last statement, what’s exactly an urgent issue in South Africa right now: white poverty or poverty in general?

In a recent thought piece for Business Day, political analyst Eusebius McKaiser got as close to the heart of this paradox as any writer has in a long while. “As an important aside, first, it struck me how much more comfortable we are talking about black consciousness than about white consciousness,” McKaiser wrote. “Somehow essentialising blackness is less egregious than essentialising whiteness. Why? Is it because ‘they are all the same’ but ‘we’ are not? I have not settled on a final explanation yet. But my heart and mind still grapple with why tropes in black behaviour the world over are a more legitimate target of sociological reflection than tropes in white behaviour. Black groups exist. But only white individuals exist. Why?”

Why indeed. Because what O’Reilly does, somewhat ironically and perhaps even unwittingly, is essentialise a sub-class of whiteness. He takes a bunch of individuals and despite his best intentions makes them part of a group. Photo: Vincent Abbott, 42, enjoys an evening smoke as his wife Esther Botha, 41, knits on their bed inside their small single-room hut at a squatter camp for poor white South Africans at Coronation Park in Krugersdorp, March 9, 2010. REUTERS/Finbarr O’Reilly

Of course, O’Reilly isn’t the first photographer to focus on the South African anomaly known as the “poor white” (whether he admits to this focus or not). David Goldblatt has been doing it for years. Thing is, as a South African, Goldblatt seems to understand that disavowing the paradox is not the best way to frame it; consequently, the nuance and subtlety in his work is of an unparalleled richness.

In the Umuzi collection Some Afrikaners Revisited, published in 2007, Goldblatt released an extra 20 images that had not been included in the first edition, 1975’s Some Afrikaners Photographed. The images were compiled in the 1960s, and their initial publication angered many of the white South Africans who saw them, resulting in the book not achieving a second print run for over 30 years.

Unlike O’Reilly, though, Goldblatt wasn’t photographing (or pretending not to photograph) poor whites; he was photographing working class Afrikaners. The distinction is important because it is less guilty of McKaiser’s sin of essentialising. In the foreword to the 2007 edition, Goldblatt tells a story of an old Afrikaner man who sat for a portrait. When a black child came to stand next to the man, he said, “Ja, wat maak jy hier, jou swart vuilgoed?” (Yes, what are you doing here, you black rubbish?) The insult, according to Goldblatt, was meant and yet said with affection.

“How is this possible?” asks Goldblatt. “I don’t know. But the contradiction was eloquent of much that I found in the relationship between rural and working-class Afrikaners and blacks: an often uncomfortable, affectionate, even physical intimacy seldom seen in the ‘liberal’ circles in which I moved, and yet, simultaneously, a deep contempt and fear of blacks.”

This is a necessary and inevitable South African contradiction that O’Reilly, four decades later, has vaguely grasped but nevertheless failed to contextualise or represent. As an outsider he can’t be blamed. Still, his work is published in America’s paper of record, and its shortcomings therefore need to be pointed out.

Photo: A girl stops by a neighbour’s fireplace before she walks to school from a squatter camp for poor white South Africans at Coronation Park in Krugersdorp, March 10, 2010. REUTERS/Finbarr O’Reilly