Just as you started to relax, the Youth League's back

Just as you started to relax, the Youth League’s back 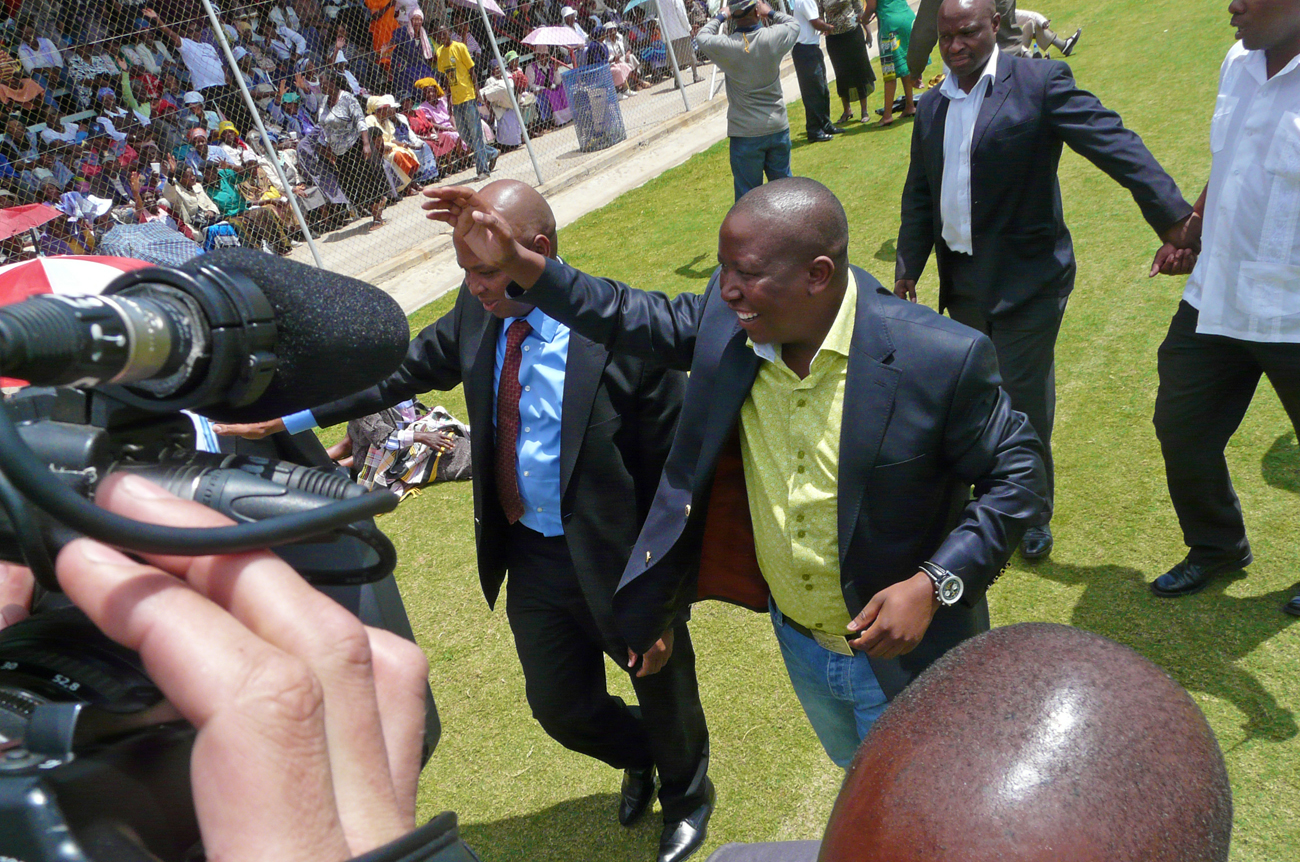 If anyone doubted that Julius Malema has been on the back foot lately, doubt no longer. Now the leadership battle for the heart and soul of the ANC Youth League has blown into the open and it goes straight to the court, with Andile Lungisa, the League’s invisible man and Malema’s number two, expected to testify against his Beloved Leader.

The real court application is being brought in South Gauteng High Court by one Lehlogonolo Masoga. He’s the guy who had the League’s Limpopo conference stolen right from under him. It was his supporters Malema is accused of ordering the police to expel from the conference. It’s taken a while, but that fracas is now becoming quite important. At the time, it seemed obvious that Malema had orchestrated the election to make sure Masoga would not be re-elected to lead the province. But now, finally, the real hard video evidence has finally emerged. It’s on The Times’ website – very obviously from a cellphone.

At the same time, Malema and his mates, have been enjoying the wonderful power of incumbency to make sure Masoga couldn’t get in their way again. They started disciplinary proceedings against him. And then, depending on who you speak to, they stacked the deck. (Well, being politicians, of course they stacked the deck.) But Malema, being that well-known follower of legal precedent, went a little overboard. Because, according to Masoga, the people who constituted the hearing into his conduct weren’t actually the people on the League’s disciplinary committee. Which most lawyers will tell you, will provide pretty good grounds to legally challenge any decision it reaches.

A little background. The ANC, and the League, elect members to a disciplinary committee at congresses. That committee stands unless one of the members is no longer available. It’s a clever mechanism to make sure judges aren’t cherry-picked for specific cases, but that any case brought between conferences will have the same judges. Obviously, Malema decided they wouldn’t do the job this time.

On Masoga’s version, a decision has already been taken to expel him. To back this up, he says Lungisa will sign an affidavit explaining the deal, which means Lungisa is clearly in Masoga’s camp. The real story though, is that while that’s been known for a while, Lungisa is now ready to let the public know it. Which should make for some fun and games within the League itself.

The League is due (we say “is due”, because planned events in the League tend to be postponed or adjourned at the last minute, indefinitely) to hold its national general council towards the end of July. While it’s unlikely that Malema will face a direct challenge to his leadership, the sentiment of the League’s members will become clearer there. And Malema’s friends are thinking of organising a motion of confidence in his leadership. It would be a show of force if you like. But it could actually be arranged by his enemies, because it may not pass.

That’s right. Politics can be a dirty game.

And don’t forget that four of the League’s nine provinces are currently being run by the national body, because they haven’t had proper conferences. It’s not exactly a ringing endorsement of the League’s political health.

In the meantime, Masoga’s legal papers would seem to indicate he has a pretty strong case. The personnel switch for his disciplinary hearing is a real winner. But add to that the fact that his lawyer (in these hearings you’re allowed a representative who should be an attorney and a member of the League) was chucked out because he’d “disrespected” the hearing, and most judges wouldn’t bother to hear the other side. His deadly sin was to ask to consult with a witness beforehand (normal practice), and then contest his denial of that right.

Obviously, it was a stitch-up.

Masoga has now done what he should do, which is take it to court. This will push it all into the open, the judge will be able to ask nice probing questions about the hearing, and, hopefully, about Malema’s authority over the local constabulary. Hell, if we’re lucky, we could have witness testimony and Malema himself being asked who exactly he thinks he is.

Masoga’s picked a rather interesting attorney to represent him in court. Her name is Juleikha Mohammed, who used to be the attorney for one J G Zuma. In fact, it was she who drafted the “loan agreement” between Zuma and one Schabir Shaik. She testified in his trial that it was “stolen” and thus the original could not be handed in as evidence. Judge Hilary Squires was less than impressed with her testimony. In the end, he ruled that the agreement probably didn’t exist, and thus the money Shaik gave to Zuma was not a loan, but something else entirely. This may all be coincidental, but let’s just say she doesn’t have the greatest track record in political cases.

However, Masoga’s decision to turn to the courts might ultimately just be an expression of weakness. Generally speaking in this country, if you turn to the law it’s an indication you’ve already lost. Politics always trumps the law here. Yes, we know it’s wrong, and yes, we’ll help you in railing against it. But it’s true. So Masoga could ultimately lose rather badly. But, he may start to sow seed of something that could start to make Lungisa a very important person to watch.