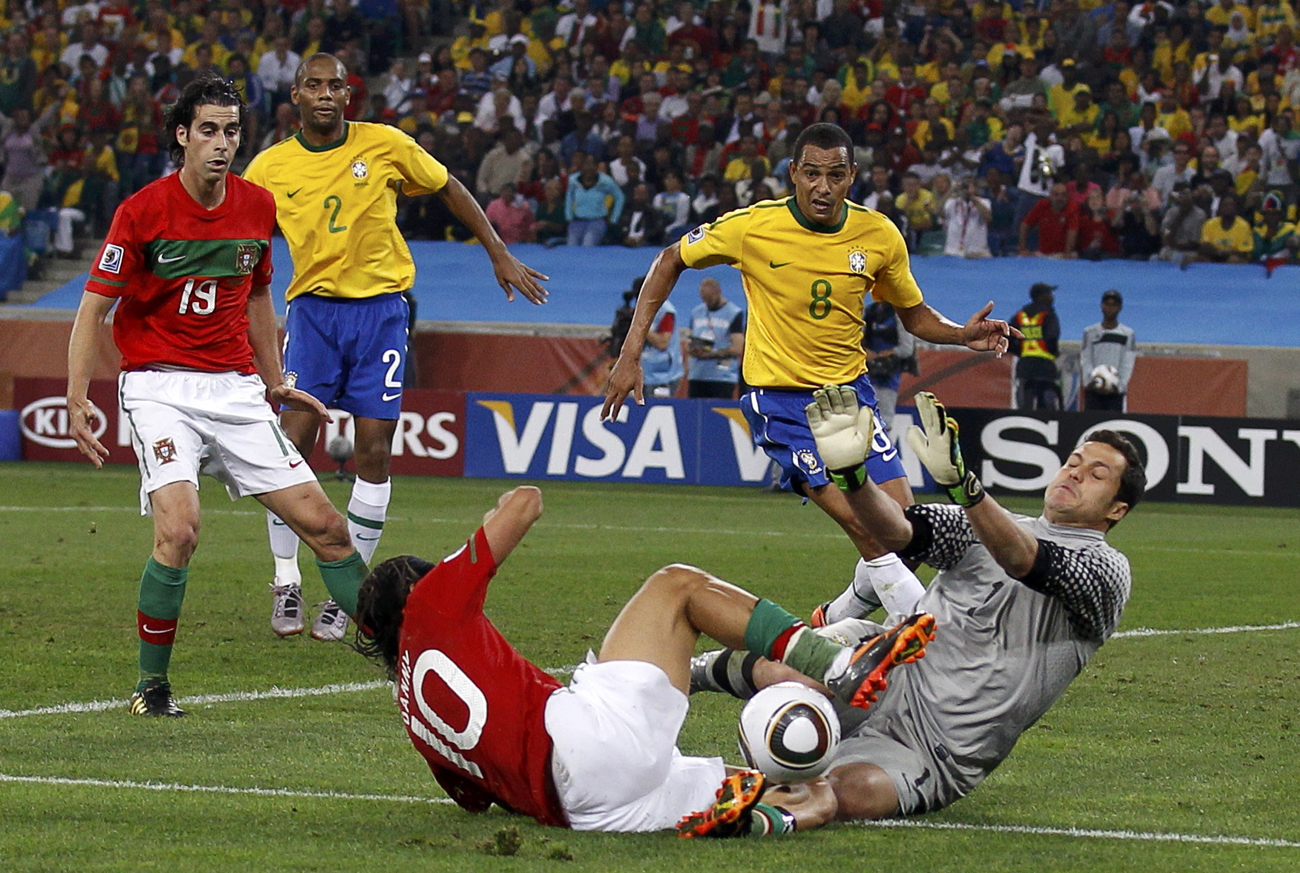 What happens when an unstoppable force meets an immovable object? Portugal and Brazil play to a 0-0 draw in Durban. It was supposedly going to be the match of the tournament, with both teams boasting considerable firepower in attack, and a flowing, graceful style of football. Yeah, right.

It was not to be, with a fitful, savage first half that drew seven yellow cards. There clearly is plenty of bad blood between the two sides – perhaps a case of a family squabble between distant cousins or a matter of former coloniser and colony. In any event, it made for some very poor football.

Dunga has clearly learned his lesson with the sending off of Kaka against Ivory Coast. He didn’t completely lose his head like he did in the game against Ivory Coast, although he was his usual animated self on the side. When it became clear that Felipe Melo and Pepe were out to hurt each other, Dunga withdrew Melo before the end of the first half.

The second half was an extremely poor game, given the amount of talent on the field. It seemed that both coaches reminded their players in the break that they didn’t need to play like their lives depended on it. Brazil had already qualified and Portugal needed only a draw to make it into the second round, and it showed in the second-half play. Brazil especially were flat and couldn’t make those trademark connecting passes in the midfield.

We’ve said it before: Brazil simply have no idea how to play defensive football. Portugal were most lethal when they counter-attacked, leaving the Brazilian defence in their wake. The only thing that stood between Portugal and the goals was Julio Cesar, the Brazilian goalkeeper, and the improbably massive Lucio. The Brazilian captain, who wouldn’t be completely out of place in a rugby front pack, was easily the most outstanding defender for the Brazilians. He harried the Portuguese strikers, but often conceded free kicks because of his physicality.

From their side, Portugal were lacking in attack. They clearly relied on Christiano Ronaldo’s magic to create scoring opportunities, something that made them very predictable.

Brazil were the better team at the end of the day, but only just. They desperately need Kaka to provide that finishing touch. We were also somewhat surprised by Dunga’s decision not to play Robinho. He is very good at crafting chances under pressure from defence, something that Julio Baptista clearly could not do.

The good news for whoever faces Brazil in the last 16 is that if you manage to get in under their skins and punish their sloppy defending by counter-attacking very quickly, they can be defeated.

Portugal have their work cut out for them. I simply don’t see them progressing into the quarter finals with their current form.

In the other, much more interesting game of Group G, Ivory Coast trashed North Korea 3-0. Nobody really believed Ivory Coast would ever repeat Portugal’s drubbing of the team brought to you by the Dear Leader, but we remain firmly sorry that the African team will return home tomorrow. They are way better than Portugal.

Here are the reporter’s notes from Brazil vs Portugal:

Julio Baptista, Daniel Alves and Nilmar start for Brazil in place of Kaka, Elano and Robinho.

I have been critical of Christiano Ronaldo’s leadership before. Let’s see how he holds up against what are undoubtedly the toughest opponents in the tournament.

1st minute: Maicon sends a searching cross into the Portuguese area, but it is turned aside for a corner by a defender.

I am sympathetic to the Portuguese. Ronaldo was clearly off and away, and you rather fancy his chances in a one-on-one situation.

I wouldn’t describe this as a surly affair, but it isn’t amicable either. Some residual bad feeling between former colonial master and colony, perhaps?

Dunga has finally learned his lesson. And we’re off to the second half. Hopefully both coaches knocked some sense into their players.

Ronaldo has been bolder in attack in this second half.

Cesar took a heavy knock to his back making that save, and play stops so he can be attended to.

The aggression levels have certainly been toned down in the second half, but so has the passion and flair.

Julio Baptista has been taken down in a gigantic tackle by Ricardo Carvalho. It was fair play, but a huge hit nonetheless.