Toronto goes on lockdown for G20 summit, buys every ad...

Toronto goes on lockdown for G20 summit, buys every ad in the New Yorker 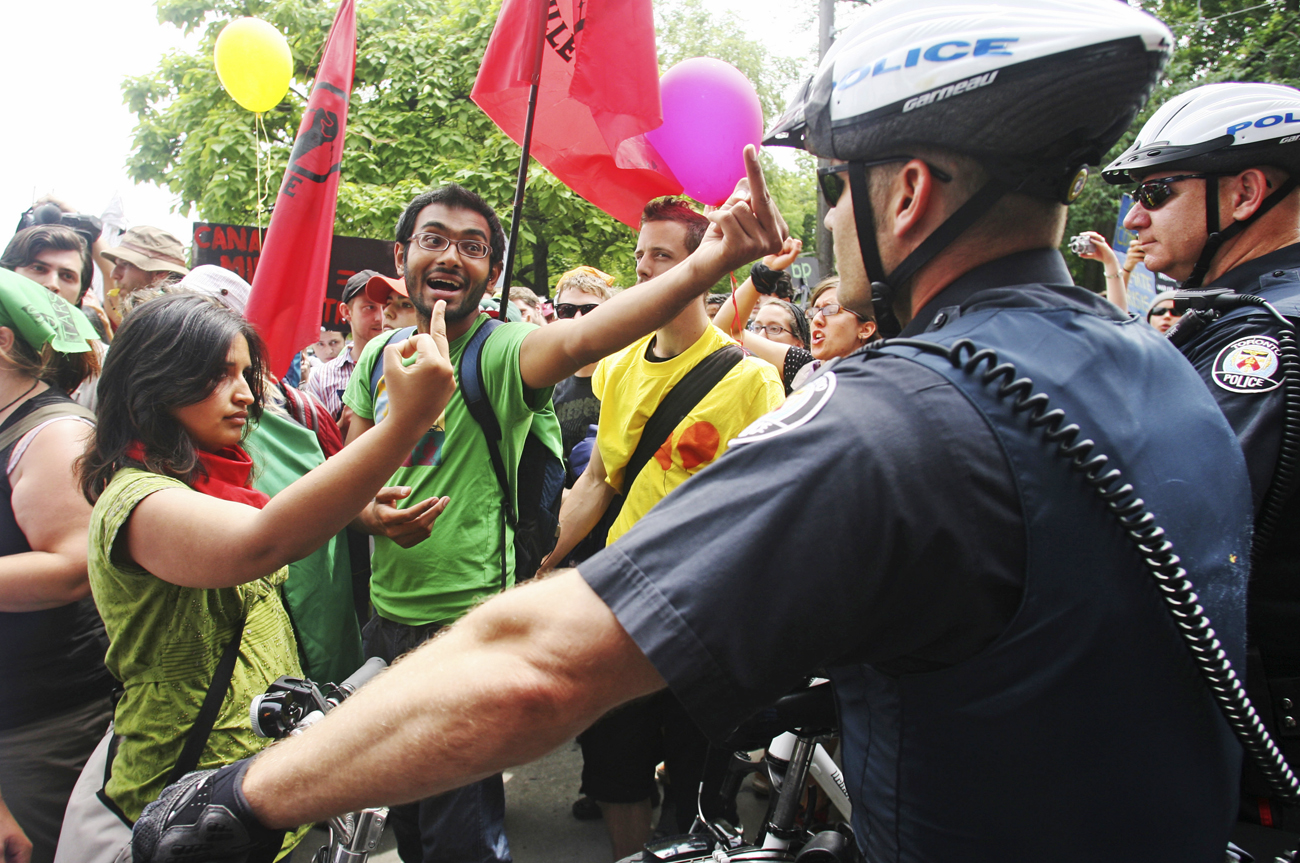 Over the last few weeks one of the most agreeable cities in North America has been turned into a fortress town, with security measures implemented that would impress even the most paranoid suburban South African. Now, with the G20 summit looming, the Canadian government is dropping the rest of its cash on advertising.

The thing about Toronto is its pleasantness, its all-round agreeable nature, its “quality of life”. The city is clean, it has a world-class transport infrastructure. It’s home to both artists and bankers, accommodating the former with a peerless cultural programme and the latter with five-star restaurants and bars. The tiered houses in east downtown are charming, west of downtown is one of the funkiest areas in North America. For good reason, immigrant communities have poured into this city, and depending on your whim you can get a taste of Lisbon, Athens, Rome, Colombo, Shanghai and Kingston (the list goes on) just by stepping off a tram. There is one “bad” area everyone talks about – it’s called Jade and Finch – but, c’mon, just one? Oh yeah, and the police are really nice people. Which is why Torontonians, on the whole, consent to be policed.

But get this: last week the US state department issued a “travel alert” to Americans travelling in or living in Toronto. That would be the same travel alert that it issues to US citizens who find themselves in areas subjected to typhoons, civil wars, and violent crime. At the moment, the state department has bestowed this honour on only six countries – Jamaica (where the government and street gangs are locked in bloody battle) and South Africa (where the World Cup has ironically ensured that crime is down to record lows) being two of them. So why Toronto (not even a country)?

The short answer is because on June 26 and 27 the G20 summit will be held there, and because Washington sagely warns that even peaceful demonstrations can turn nasty. Notes the Toronto Star: “On June 26, thousands are expected to turn out to the People First! march, but organizers have vowed that the event will be a peaceful, family affair. However, protest organizers have confirmed that numerous activists plan to splinter from the larger demonstration and continue a ‘militant’ march to the security perimeter.”

So Toronto is on lockdown, and the good people of the city are under siege. At least 90 percent of the US$1,1-billion bill for the summit is going on security, and some of the anti-terrorism measures are unprecedented. For instance: a three-metre-high, 3.5-kilometre concrete and metal fence enclosing the area where the summit will be held; the shutting down of banks and theatres; the closure of Toronto’s number one tourist attraction, the CN Tower.

And Torontonians, unsurprisingly, are now less than happy to be policed – which isn’t simply a function of the huge (and rudely abrasive) security presence in their city, but also of the fact that many locals are struggling to see the summit’s upside.

According to the BBC, opposition Liberal Party leader Michael Ignatieff has described the double summit – the G20 will be held in Toronto after the G8 – as “the world’s most expensive photo op”. Ignatieff was referring mainly to the excessive security arrangements, although he had a jab too at the “fake lake” built to impress the contingent of 3,000 journalists expected to arrive in the city. As the BBC notes: “[The] ‘fake lake’ is just a stone’s throw from the real thing – Lake Ontario, one of the world’s biggest lakes.”

Of course, Canadian Prime Minister Stephen Harper and his government were never going to back down because of a little criticism. In fact, as the hour of the summit has approached, they’ve just ratcheted up the public spending. Harper’s government was responsible for a major portion of the US$1,1-million cost of buying out every ad in the latest issue of the New Yorker, an exercise designed to promote Toronto as a city with “world-class shopping, sports and dining”.

At least one of the city’s major media brands, the magazine Toronto Life, doesn’t think it was money well spent. “As the G8 and G20 summits loom, now is apparently the time to remind Americans that we’re not backward hicks who while away the peak tourist season drinking mooseshine in our igloos,” the magazine quipped in an online editorial. “The medium, in this case, is the current issue of the New Yorker, which has had literally all of its ad space bought out by Canadians: the feds, provincial governments, tourism boards, businesses and the like…

“Part of that cost was incurred by the government, which used the space to boast of Canada’s relevance due to our strong banking system and penchant for windmills, among other things.”

Photo: Protesters gesture at the police as they make their way through the streets ahead of the G20 summit in downtown Toronto, June 23, 2010. REUTERS/Chris Roussakis