Yanks never give up, china!

Yanks never give up, china! 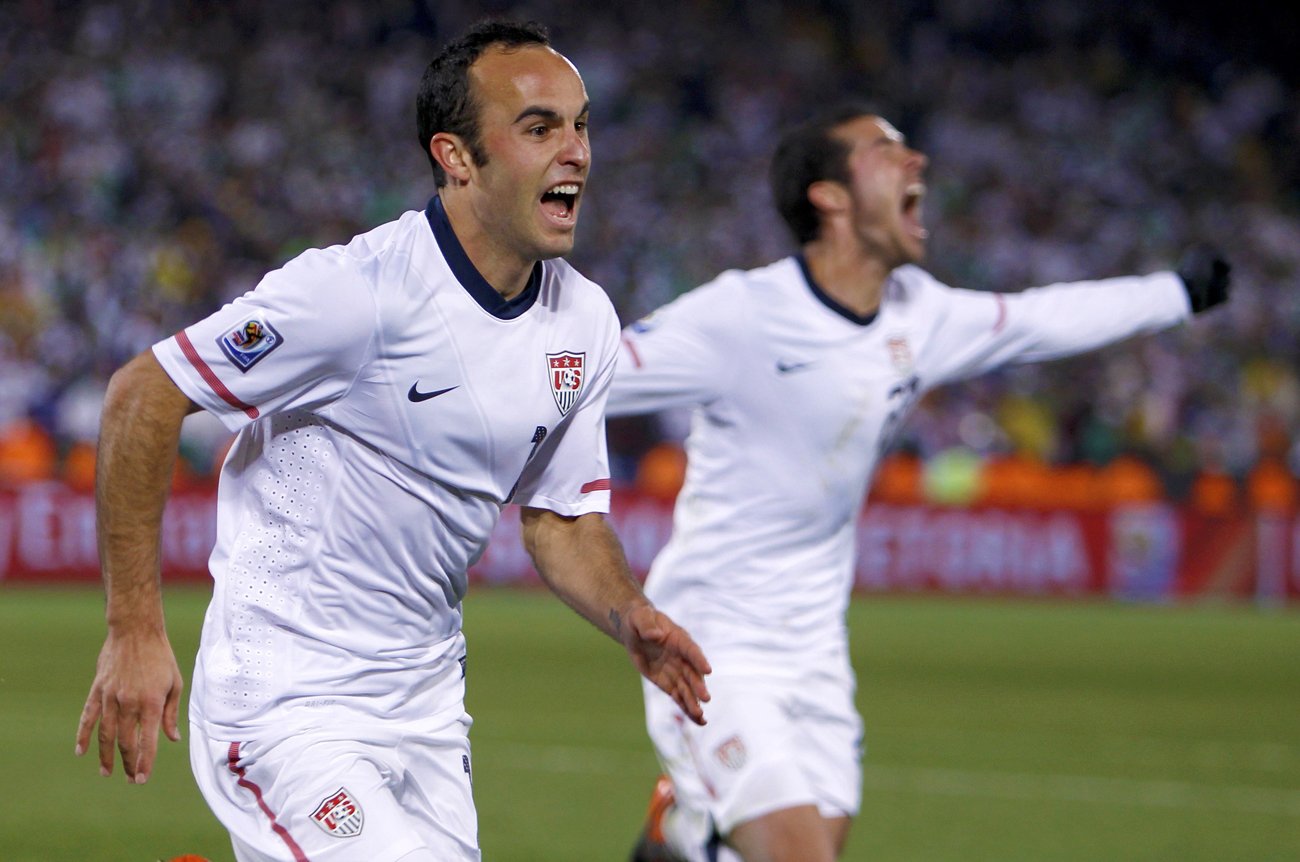 As in every good Hollywood blockbuster, their heroes endure every calamity known to man, survive many injustices and save their country with mere seconds remaining before complete destruction. On Wednesday in Pretoria, the US soccer team pretty much followed that recipe: the match ended US 1, Algeria 0.

Isn’t it strange that a nation more accustomed to baseball, basketball and American “football” put on a performance that embodies the spirit and attitude of football? That never-say-die grit that has somehow disappeared in the European game, that refusal to give in – that is what the American boys gave us tonight.

They were cheated of a victory several times this tournament. They came from behind against England, and against Slovenia. And this afternoon, against an Algerian side looking to do serious damage, their indomitable spirit finally paid off. For the second time in their history, (they reached quarter-finals in 2002), the US are through the group stages of a Fifa World Cup.

The US coach Bob Bradley’s strategy was actually very simple: don’t faff around. Just get the ball forward, and get it into the back of that Algerian net. They were direct in attack. The most outstanding player in the American midfield was Michael Bradley, the head coach’s son, who was all over the field, putting in the crucial challenges at the back, making the intelligent touches in midfield and setting up the strikers for shots. It can never be easy for the coach of an international football team to face the prospect of picking his own son to play in the team, but the younger Bradley’s outstanding 90 minutes should dispel any doubt from the mind of even the most cynical person.

Jozy Altidore played well too, even though he was often guilty of making silly mistakes, and silly misses as well. He had a Yakubu-like moment when he shot what was supposedly an easy chance over the poles. Clint Dempsey and Landon Donovan were their usual hard-working selves. Dempsey can actually take a lot of credit for Donovan’s goal. It was his attempt that the Algerian goal spilled Donovan’s way.

America’s simple approach to play wasn’t without its dangers, though. The two central defenders were often beaten by Rafik Djebbour, the rest of the team pushing up too far in attack and not back-pedalling quickly enough to assist in defence. The Algerian striker, who has a great first touch but a less-than-great final touch, used his speed and ability to turn on a dime very well. He gave the US a horrible scare in the opening stages of the match when his shot hit the bar and bounced back into the field. Algeria’s young goalkeeper, Raïs M’Bohli, made saves that belie his youth and lack of experience on the international stage. It’s a pity he’s going home with the rest of his team. He played with all his heart and deserved more than this early exit.
Algeria were ultimately punished for their clumsiness in defence (they often relied on rough tackles to stop the physically intimidating Altidore) and their failure to exploit the gap between America’s defence and midfield.

For the US, it will be a very happy night. They just refused to knuckle under, even when it seemed as if the odds were completely against them. Their incredible self-belief will make them a very dangerous side to whoever they face in the last 16. They. Simply. Will. Not. Give. Up.

Bob Bradley has made a couple of substitutions to the team that was so cruelly denied a win against Slovenia. Oguchi Onyewu will start on the bench. Jonathan Bornstein will take his place in the centre back position. Hercules Gomez replaces the suspended Robbie Findley and Maurice Edu will start in place of Jose Torres.

Algeria have only made one substitution. Rafik Djebbour starts in the striking position.

Former US president Bill Clinton is in the stands, sitting snugly next to Fifa president Sepp Blatter. The holes in Algeria’s defence are bigger than the holes in the US defence. That just about sums it up, I think.

Djebbour is excellent at finding space. He is proving to be more than a bit of a handful for the US centre backs.

Michael Bradley is a delight to watch in midfield. His intelligent play is unrivalled, at least by any other player on this field.

Will Bob Bradley bring Oguchi Onyewu on to control Rafik Djebbour? I think he might.

It’s Benny Feilhaber who goes on, in place of Hercules Gomez.

The US has a more direct approach to attack, and have been let down by poor finishing so far.

It was Buddle who got the final touch on the ball.

Clint Dempsey took a jab in the face from Yahia’s elbow in the scramble for that free kick, and goes off with a cut lip.

It’s over for Algeria. They need two goals in 30 seconds.

The US are through!