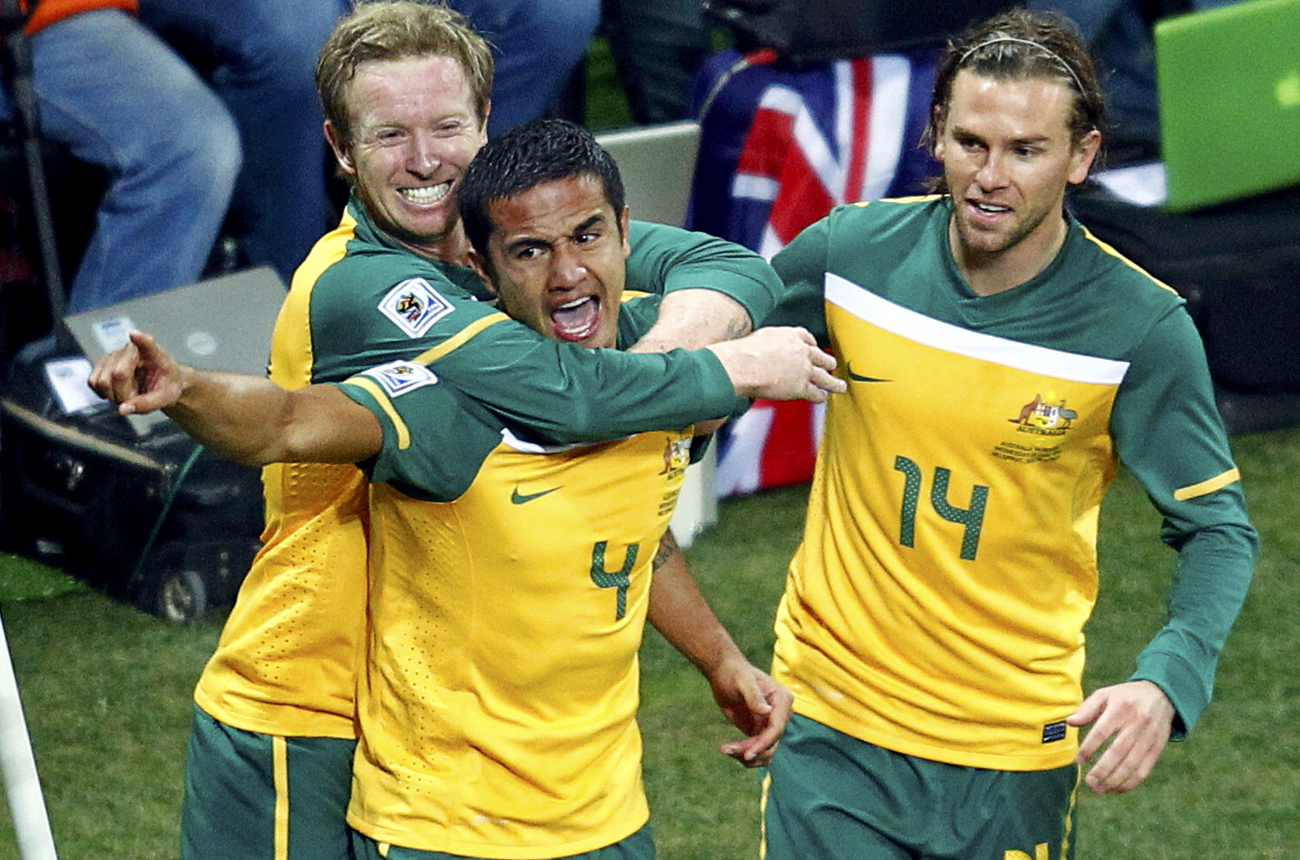 Nelspruit’s Mbombela stadium was a grand theatre for the drama that was the Group D match between Serbia and Australia. Mauled by the Germans and thwarted by the Ghanaians, the Australians finally managed to present their best face at the expense of unlucky Serbs. It ended Australia 2, Serbia 1.

It was a game of two halves: the first half saw the Serbs totally dominate play, and the Australians playing with a sole attacker, Kennedy, not being able to do much about it. The Serbs played a good-looking, flowing style of soccer with of quick passes and dangerous crosses looking for their basketball-sized forward, Zigic. As you will see from the reporter’s notes, the Aussies’ skin was saved several times by the veteran master-keeper Mark Schwarzer.

In the second half, the Aussies finally decided to get out and look for the win. And a win they found through two thoroughly brilliant individual goals by Cahill and Holman. The first was achieved by jumping over Manchester United’s Vidic and the second by shooting brilliantly from almost 30 metres and not giving any chance to the goalkeeper Stojkovic.

Like any nail-biter, the game was not without controversy and the Serbs will have ample opportunity to feel unhappy with refereeing on the night. Uruguayan referee Jorge Larrionda was rather passive as Tim Cahill handled the ball in the Aussie penalty box, soon after the Serbs reduced the Aussie lead after Schwarzer’s strange handling mistake (Jabulani?). Seeing that the Serbs had previously conceded two penalties by handling the ball in manner much less conspicuous than Cahill’s, it is only understandable that they felt wronged.

Sadly for both teams, after the great battle of the Lowveld, they were both confirmed to be out of the World Cup. But such is the nature of this great tournament: way more hearts are broken than full of love.

The Serbs are back to full strength, with central defender Lukovic back to claim his place next to Vidic. From their side, the Aussies have Tim Cahill back but Harry Kewell is under suspension after his unfairly earned red card against Ghana.

Nelspruit stadium is a beautiful venue.

For the first 10 minutes it is pretty much all Serbia, whose keeper is yet to touch the ball. Still, the Aussies feel energised by their draw against Ghana. It will be a tough battle, this one.

There is a carnival atmosphere at the Nelspruit stadium, beautiful!

Unlike the previous two games, the Serbs are playing a flowing possession game, probably because the Aussie midfield is letting them dominate the space. The Serbs appear to have accepted the loss. Their energy is way down and it will be difficult for them to recover.