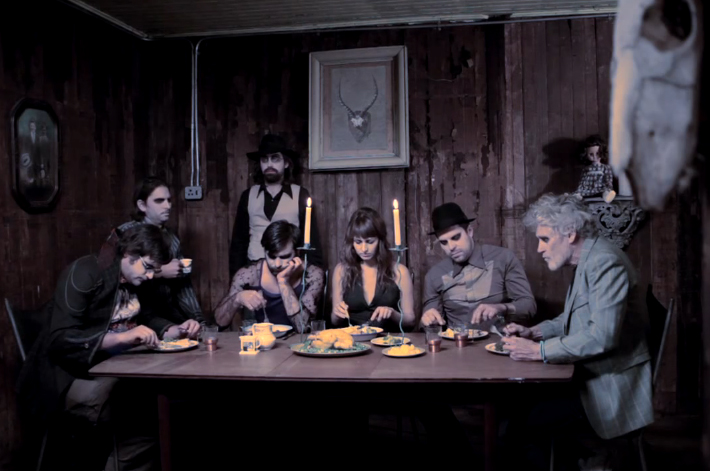 In the first six months of 2010, South Africans saw a handful of low-budget music videos go insanely viral, with Die Antwoord and Jack Parow introducing a new breed of Afrikaans youth culture to the world. Could this Radio Kalahari Orkes video be next?

The video opens in sepia tones, seven hollow-eyed people around a dinner table, forks clinking on plates and a wolf howl in the background. It would be a cliché if it weren’t for the bright yellow offset of the food and the candles. The camera then pans to a dead man lying prostrate with his hands over his chest, holding a large yellow flower. A loud blast, and a guy with an oversized hat jumps through the wall, the dead dude opens his eyes. We begin now to recognise the faces. The guy with the crazy hat is Jack Parow, the grey-haired man at the head of the table is Ian Roberts, the dead dude is…yup, it’s Rian Malan.

Here’s when we know we’re onto something: Jack Parow is inching slowly up the row of the undead, his ringed fingers crack the neck of Wynand Davel (virtuoso violinist of Die Kaalkop Waarheid fame), and he sits down next to Lize Wiid (pianist, accordionist and harmonist who performs regularly with the inimitable Laurie Levine). Says Jack into Lize’s ear: “Hello baby, voor ek jou oop mond soen, se vir my: kan jy braaibroodjies maak?”

If you don’t understand the Afrikaans, sorry pellie, but we can’t help you – because the track is “Blaas jou vuvuzela,” from the new album of Radio Kalahari Orkes, and in order to get this meeting of Nashville, the Addams Family and Pretoria North, we’d have to go way back into Cape Malay culture. Let’s just say that when the guitars crank up and Ian Roberts starts singing –  “Baby ek wil braai vanaand, baby jy maak slaai vanaand” – if you don’t dig it you never will.

Either way you’ll have to admit, though, that on a budget of around R30,000 the video is pretty remarkable. Conceived by Dan Roberts, producer of the new RKO album and co-owner with wife Ann Roberts of the production company Terraplane, it’s an eclectic and wholly original mix that pays full credit to the double-entendre lyrics of the song’s writer and composer, the aforementioned Mr Malan.

To say the effect is Shakespearian wouldn’t be stretching the point – the bard was nothing if not bawdy, and he was certainly a man of the people, an ou who extracted the universal from the commonplace. Malan’s lyrics appear to do exactly that. Sings Ian Roberts (Dan’s cousin) in the second chorus: “Baby waai jou boud vanaand, baby ek voel stout vanaand, ek bring n’ harde houd vanaand, baby ek wil…braaaai.”

Ja, nee. And then we see the models, bikinis en alles, dancing around in the Melville garden of De Waal Hattingh, inarguably South Africa’s number one local music fan and the oke who was recently made famous by Malan in his latest article for The Spectator. (A loan shark by profession, Hattingh accompanied Malan to a nightspot in Soweto where a stand-up comedian referred to the latter as “Jesus on acid”. That one doesn’t appear in the Speccie piece, but another superb joke at the white men’s expense does [see link below]). We won’t spoil the experience by giving you the rest – the video was posted onto Youtube a couple of days ago, as of now it’s got just north of 2500 views, and we’d prefer you to come at it fresh. Also, we fully expect it to go viral in the next few days. If it does, it’ll do a lot to redeem the bad rep the vuvuzela’s been getting of late. The models holding the things, the fact that when you blast them you’re invited to “doen dit vir Mandela” – out of such conditions are backlashes made, the sort that not even The Onion’s brilliantly scathing send-up of the 50,000-member South African Vuvuzela Philharmonic can quash.

We’ll sign off then with a recent Facebook post from Jim Neversink, another iconoclastic local musician (who’s unfortunately just relocated to Denmark): “If we have to put up with Mariah Carey, Britney Spears and all the other crap that the rest of the world has forced on us…then for goodness sake let the people of Africa blow their vuvuzelas… after all South Africans are paying for this World Cup and it’s only for a few weeks. Vuvuzelas rock. Blast away baby.”