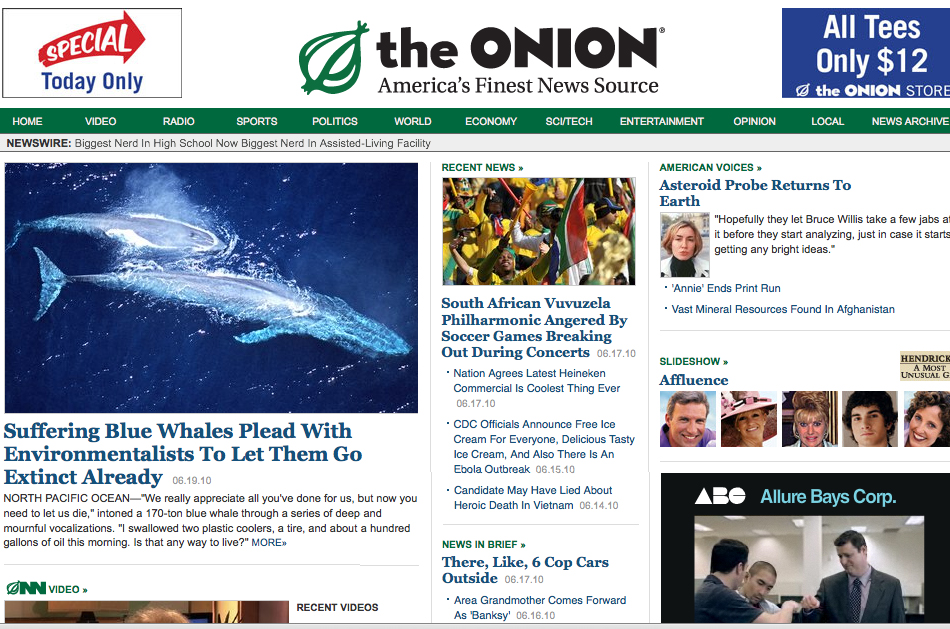 How does the United States, a world unto itself, perceive the 2010 Fifa World Cup? If humour can be said to reveal truth, there’s no better place to look for an answer than the most revered satirical news brand in America. But first, what exactly is the story behind The Onion?

The official version is that The Onion was founded in the mid-eighteenth century as the “Mercantile Onion,” because those were the only two English words its immigrant founder, Friedrich Siegfried Zweibel, knew at the time. Zweibel’s grandson, so the story goes, took over editorship of the paper in 1896, a position he holds to this day. When Zweibel was rocketed into space in 2000 he retained his name on the masthead, but ceded de facto control to Bernard Baruch and Aunt Jemima.

Then there’s the real story.

The Onion was founded in 1988 by two juniors from the University of Wisconsin-Madison, and sold a year later for $16,000. Named by the uncle of one of the original founders – who noticed that his nephew was so broke he couldn’t afford to eat anything else – the paper was initially distributed to university towns and cities in the Mid-West. When the Website was launched in 1996 The Onion went national, and in 2000 it was bought out by Comedy Central, which expanded its reach via other media forms. Based nowadays in New York City, The Onion is the premier satirical news brand in the United States, an accolade it richly deserves – these guys are hilarious.

Just how funny they are is reflected in some of the stories from The Onion that mainstream media has taken seriously over the years. In 2004, a MSNBC report presented as fact an Onion article headlined, “Study: 58 Percent of US Exercise Televised”. In 2006, a Danish TV channel reposted a story to the gossip section of its Website titled, “Sean Penn Demands To Know What Asshole Took [email protected]”. And in February this year Websites in Italy and Norway published as truth clips from The Onion video piece, “Denmark Introduces Harrowing New Tourism Ads Directed By Lars Von Trier”. It’s not clear yet whether any news organisations have taken as fact The Onion’s editorial stance on the 2010 World Cup, but either way it’s indisputable that here  the staff writers have outdone themselves. They’ve chosen quality ahead of quantity in their coverage, publishing only two stories and one interactive feature to date, and the first story – published on June 4 – explains why.

Under the header “Nation’s Soccer Fan Becoming Insufferable,” the anonymous reporter (The Onion never gives bylines) tells the story of one Brad Janovich, 32, whose exuberant behaviour is beginning to annoy co-workers at his Wilmington, Delaware, office.

“’Decorating his cubicle with World Cup stuff is fine, I guess,’ said coworker Greg Lafferty, who endured several elevator rides in which he politely listened to the lone American soccer fan evaluate international matchups before realizing that Janovich was discussing the outcomes of soccer games and not impending wars. ‘I myself have a Yankees pennant at my desk. But Brad has all these scarves draped all over everything. They hang into other people’s areas, and when they ask him to move them, he responds by explaining what the scarf means. It’s driving us nuts.’”

The Onion’s interactive feature expands on the angle, saying that because “millions have been swept up in an unfamiliar sport…[and because] there’s so much more to the game than not using one’s hands, Onion Sports presents an interactive visual guide for the new soccer fan.”

The visual guide is a soccer pitch, with eleven players and an opposing goalkeeper, plus two referees standing in odd positions. Scrolling over the right-half will yield the following information: “This ‘Midfielder’ was rolling around on the ground in pain for 15 minutes but is now running around all over the place.” The opposing keeper yields this: “The ‘Keeper’ or ‘Goaltender’ is allowed to dress differently than his teammates, but the other team usually figures out which side he’s on anyway.”

But by far the most astute piece published by The Onion on World Cup 2010 is the one under the headline, “South African Vuvuzela Philharmonic Angered By Soccer Games Breaking Out During Concerts”. The article seems to have found a relatively large local audience through Twitter, so The Daily Maverick will only reprint what it considers to be the standout paragraph, but first we need to mention that Dr Stefan Coetzee, the Philharmonic’s concert director, was quoted in The Onion saying he couldn’t understand why soccer games were being held in the audience space during the 2010 concert series. Oh, and we should also probably say that The Onion considers the Philharmonic “to be among the best large-scale monotonic wind instrument ensembles in the world.”

Okay, here’s the paragraph: “The following days, during which a string of large-scale vuvuzela performances were held, saw the unusual events repeat in Johnnesburg, Durban, Pretoria, and Port Elizabeth as audience after audience was driven away by Fifa national football teams. As a result, the South Africa Vuvzela Philharmonic, which is supported solely by money from ticket sales, has suffered staggering losses financially. And the musicians, many of whom trained for years and underwent a harrowing audition process to earn one of the orchestra’s 50,000 seats, said the biggest blow was to their professional pride.”