Back to their emphatic ways, the Spaniards outclass Hon...

Back to their emphatic ways, the Spaniards outclass Honduras 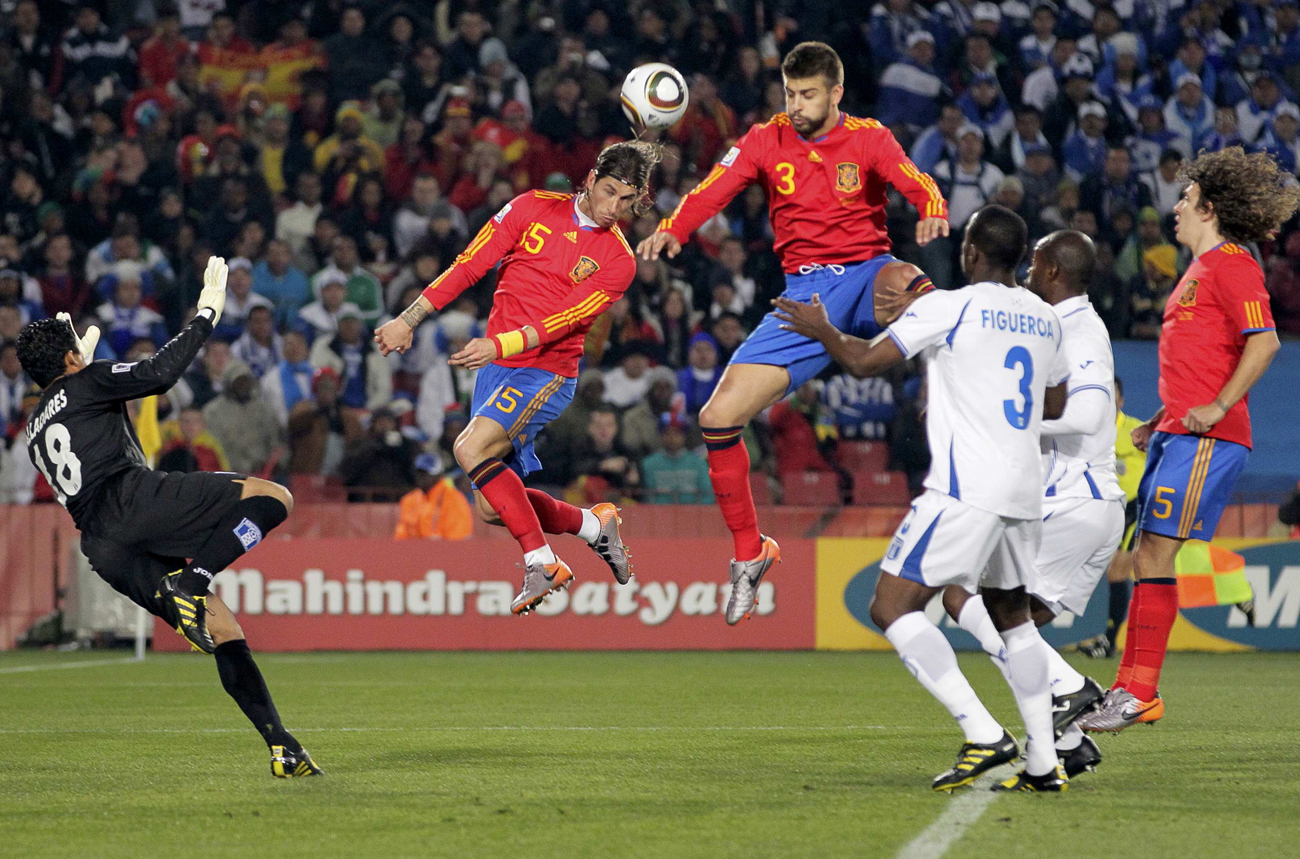 Ellis Park was host to a beautiful game of soccer on Monday night. Spain attacked, then attacked, and then, for a change, attacked. From their side, Honduras was a fair partner, too. It ended Spain 2, Honduras 0.

It could very well have been 5-0 to Spain. Honduras were comprehensively beaten, and will consider themselves fortunate not to have conceded more goals against a side that defined the absolutes in every area, except perhaps right in front of goal.

Never mind the result – Spain have a bit of a problem. They dominate play, and create chances, but can’t seem to get the number of deserved goals in. It seems to be an issue of having too many choices in their strike force. Choosing which striker will play, and where, is not simple when you have so much talent available.

Spain certainly created the chances. The midfield engine of Xavi, Busquets, Xabi Alonso and, later on, Fabregas, controlled the pace of the game and, almost at leisure, unleashed incisive passes to the two forwards. On many occasions, David Villa and Torres had only to make one or two critical touches to set themselves up for an attempt, but ended up either missing the opportunity or smashing the ball against the opposition’s defenders. It is an area of concern to them and they do need to work on that before, hopefully, moving on to the later stages of the tournament, where such mistakes will come at a very heavy price.

Spain are also a little too clever for their own good, making too many passes and too many touches on the ball before a player makes up his mind to have a shot at goal. It sounds ludicrous, given their collective talent, but they do need to simplify their game a little when going forward. Xavi, to his credit, did make a lot of simple, yet devastating passes, but players like Jesus Navas may need to look at their midfield play.

Fernando Torres is also not the player he was before his knee surgery in April. He missed two chances in front of goals: the one a header that he needed to strike down, and the other a chance that he crafted skilfully but then failed to capitalise on. It was a frustrating evening for El Nino, and you get the sense that Vicente Del Bosque may have to decide to give players like Juan Manuel Mata a call-up ahead of Torres.

Villa had a cracker of an evening, scoring two excellent goals. He could have easily made that a hat trick had he had more composure in taking that penalty.

But it was a solid performance by the Spanish side: one that doesn’t guarantee them a spot in the last 16, but certainly a very emphatic bid. Honduras are sitting at the bottom of group H, and will be making the trip back home after their meeting with Switzerland in Bloemfontein on 25 June. They still have something to contribute to this tournament – Switzerland need to beat them and hope Spain somehow fade against Chile in order to go through. Very remote, but we’ve seen crazier things happen.

Goals are clearly on the mind of Vicente Del Bosque. Fernando Torres starts tonight. Iniesta is still nursing an injury he sustained in the shock loss against Switzerland. Jesus Navas starts in place of David Silva.

No Fabregas? (You can take the boy out of Arsenal…)

Fernando Torres has dyed his hair a Marmite black for tonight’s match.

That was almost a penalty against Honduras. A Honduran player definitely handled the ball in the area, but no luck for the Spanish as the Japanese referee waves play on.

Ramos collides with Nelson Valladares in that attempt, and  the Honduran keeper gets a knee to his face.

Casillas has been accused of a loss of concentration in that first match against Spain, apparently because of the presence of his girlfriend in the stands behind him.

Xavi has all the room he wants in the belly of Spain’s midfield. Odd that the Hondurans aren’t closing him down, considering how many of Spain’s decisive passes come from Xavi.

Gerard Pique is off with blood pouring out of his mouth. He took boot in the face in the line of duty. Spain are, for the moment, a man down.

Pique is back on, with a mouthful of what appears to be cotton wool to stop the bleeding. Can’t help but remember Itumeleng Khune’s save of Villa’s penalty in the Confederations Cup.

Villa misjudged the amount of time he had to set himself up for a goal there.

Spain are clearly guilty of having too many touches in attack. No player wants to take responsibility for the final shot.