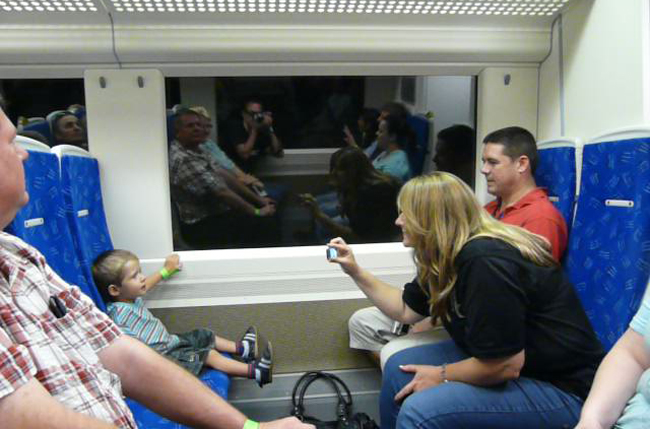 Even if you're still sulking about the cost of the Gautrain project, there's no denying it’s been largely accepted with awe and pride. But the train running in parts of Gauteng at screaming speeds will bring much more than safe and fast transport.

South Africa’s middle classes hate public transport. More even than the average American, to whom the entire concept is a bit too much like communism. In SA, public transport has a dodgy reputation, to put it most mildly. You know, minibus taxis with gunslingers for drivers and buses run by the same organisation that, quite literally, is incapable of changing a lightbulb outside your reporter’s house.

But the wonderful thing about the Bombela Consortium is that it seems to have absorbed capitalism into its very soul. It gets it. It knows that with a good amount of PR (not too expensive if you know what you’re doing), plus the excitement of its workers, with a hefty dollop of something new, and you have a winner on your hands. More Bok than Bafana if you will.

And it’s not just the shiny new ticket machines, it’s the nous to know that when your Sandton station is going to be packed because people are obviously keen, you simply put up three trestle tables and, hey presto, you’ve got another two whole ticket offices. You may think we’re being facetious, but just one block away, Fifa has been selling tickets for the last two months, and they haven’t thought of anything quite so breathtakingly simple. That kind of thinking should be enough to turn the soccer body orange with envy.

But the real import of all of this, apart from the fact it’s going to be the most fun way for the middle classes to spend some money for a while, is that it’s really going to change the geography of Gauteng.

Until now a Sandton businessman on a Friday afternoon could count on it taking at least an hour in traffic to get to the airport. And possibly much longer, hell, if the road to the airport was blocked, radio stations would lead their news bulletins with it. If he wanted to be productive on the way, he’d need to get a taxi (or a chauffeur, stop thinking small – Ed). Now, once he’s in Sandton, he’s already at the airport. Going through all the ticketing procedures is so quick, and the train is so damned fast, that the only down time is a few minutes underground. That’s really a few moments of blessed peace and quiet (of the type young Phillip de Wet just doesn’t understand).

That means leaving the office to get to the airport, and from the airport back to the office, will take you around an hour combined. Instead of the usual two hours it always used to take to get home once you had your luggage. So, if you land at domestic arrivals at 3pm (with no luggage), you can be at the Sandton office at around 3:40. Not bad by anyone’s standards.

There’s also a fundamental political geographic expression we can’t escape. Once you’ve paid your R100 for the privilege, you end up in a multibillion-rand train system, soaring above the shacks of Alex. That’s great for you, sucks for the Alexandrans though. You can’t help but think that’s unlikely to make young men less angry at the rich. But you won’t be able to play blind to Alexandra’s daily woes.

But there may be some pride in the fact that Africa has at last something to rival London’s Paddington Express. And that’s the closest comparison. The Paddington Express costs you around 16 pounds one way. It’s bloody fast, and super comfy. And it’s also changed the mental geography of London. It means business people don’t have to sit with the hoi polloi for an hour on the Piccadilly Line, but can jump on from the heart of the city.

When a now-forgotten premier of Gauteng (now sort-of leader of a sort-of opposition party) first proposed this, he was laughed at. Some people are still laughing at him, but that’s another story. There was strong opposition from the likes of Jeremy Cronin, on the grounds that it was something that would just improve the lives of the middle class, at the expense of the poor. That criticism is still justified. But in the meantime road congestion has become second only to Eskom as a bottle-neck on the area that really drives the continent’s economy. Which makes this a much more valuable project.

Also, at R100 a trip, it’s not cheap. But it’s cheap enough. And when the other legs are installed, that Sandton to Midrand and Pretoria line is going to make someone a killing. The history of British railroads is that even when they were run terribly, people still made a killing. It’s one of the most simple business models there is. Lots of people paying a little using the same product every day. Hell, you’re not even going to have ice on the line, most of the time.

In the meantime though, people are enjoying the experience. There was a time when Vaalies, as they were then, used to laugh at people who lived in Bloemfontein for spending Sunday afternoon watching the N1 from Cape Town to Joburg. To see the exotic number plates was the joke. Now, foreigners (and there are a few about) must be laughing inwardly, to see the Gauties rushing to take their wives, kids, grandparents and in-laws, on what after all, is just a normal train.