The World Cup Day that was: 19 June

The World Cup Day that was: 19 June 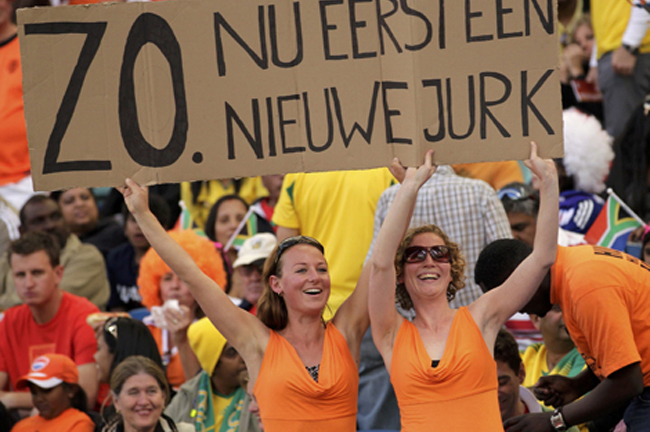 Anelka out of the World Cup; Netherlands beat Japan, progress to next round; Ghana and Australia draw; Denmark defeat brave Cameroon; Kaita receives death threats; England fan gatecrashes dressing room on his way to the toilet.

French striker Nicolas Anelka is out of the World Cup. No, not through injury or because of a red card, but due to his own foul temper. After French coach Raymond Domenech spoke to Anelka about his poor performance in the first half of Friday’s 2-0 defeat by Mexico, the striker is said to have reacted by yelling at Domenech: “Go fuck yourself, you son of a whore.” Anelka was substituted for the remainder of the match. Since he refused to apologise, the French Football Federation decided to send him home on Saturday. The levels of tension in the French camp suggest they’ll only play one more World Cup game in 2010 anyway. Anelka announced his retirement from international football late on Saturday – probably a wise choice since Domenech certainly won’t be selecting him again.

Despite the trauma some of their supporters have faced due to those little orange dresses, the Netherlands is having a great World Cup so far. They beat Japan 1-0, finally penetrating a tough defence when Wesley Sneijder struck early in the second half. The Dutch had 61% possession during the match, and it is a mark of Japan’s resolute defending that they were denied more scoring opportunities. The Netherlands have now won two of their two matches, Argentina being the only other team to achieve this so far. Denmark’s defeat of Cameroon on Saturday evening made the Dutch the first team to qualify for the second round.

Ghana vs Australia was another game dominated by a dodgy refereeing decision. Australia struck early, with a goal by Brett Holmann in the 11th minute, but when striker Harry Kewell was red carded only a few minutes later, Ghana equalised from a penalty. Despite several shots on goal, the Ghanaians were unable to score again to win the match, as the fighting Socceroos held on for a 1-1 draw. Now it’s all down to the final set of matches to see which teams will go through in group D.

Denmark and Cameroon were playing to stay in the tournament on Saturday night, and it was the Danes that ultimately prevailed 2-1, despite the Indomitable Lions’ early lead. Cameroon are thus the first team out of the World Cup, but they didn’t go down without first providing us with some entertaining soccer. This match was a welcome reminder of what it feels like to watch two teams playing to win, rather than playing not to lose. Saturday was a bad day for African teams all round – let’s all send some good vibes to The Ivory Coast vs Brazil on Sunday.

The Daily Maverick, M&G, The Independent

Sony Kaita’s red card in Nigeria’s match against Greece on Thursday is haunting him in more ways than one: the player has received death threats because of it. However, although Kaita has confirmed that he has received death threats via email, he has downplayed the incidents, saying: “I’m not disturbed about that because as a Muslim, only God decides who lives and who dies.” Nonetheless, the situation is eerily reminiscent of the shooting of Columbian defender Andres Escobar’s murder after the 1994 World Cup (Escobar had scored an own goal). We hope for Kaita’s sake that the Nigerians pull off a miracle and advance to the second round, although this doesn’t look particularly likely.

The Football Association has laid a complaint with Fifa concerning the fact that England fan Pavlos Joseph walked into the team’s dressing room minutes after their draw with Algeria on Friday. Meanwhile, Joseph claims he stumbled into the dressing room by mistake while he was looking for the toilet. This didn’t stop him from giving David Beckham a dressing down about England’s performance (and, let’s be honest, who could resist that), saying: “David, we’ve spent a lot of money coming out here. That was a disgrace and what are you going to do about it?” Josephs said Beckham looked surprised, stunned and didn’t know what to say. But the England fan might be giving himself a little too much credit if he thinks his tongue-lashing reduced Beckham to speechlessness – Becks doesn’t know what to say at the best of times.