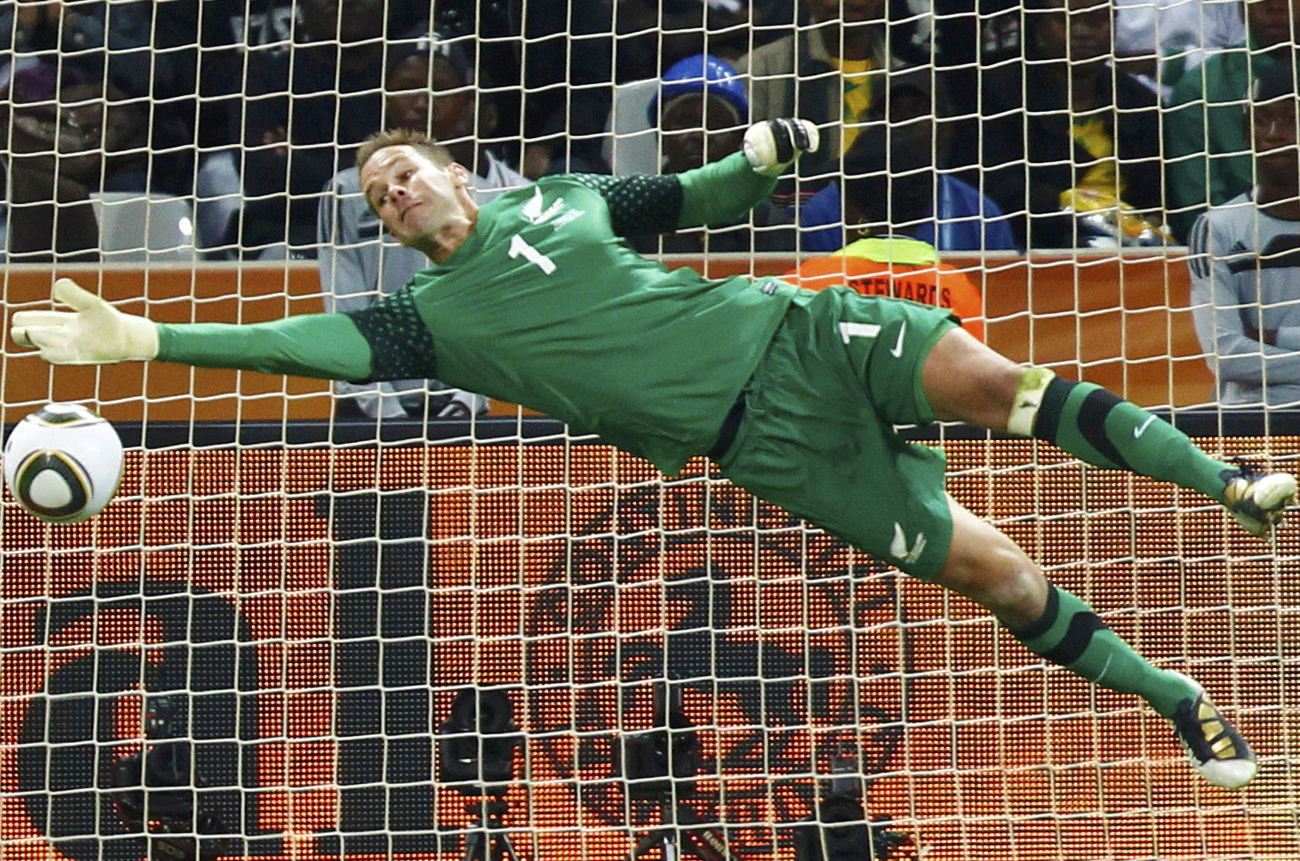 We’ve seen some pretty big upsets in the World Cup so far - Spain against Switzerland and Germany against Serbia - but this afternoon’s result must be the most astonishing of all. How on earth did a small rugby nation manage to get a point against the world champions? It would now take extreme bravery to put money on any team winning the World Cup.

Italy, as the defending champions, were officially one of the favourites to win this World Cup. We’ve seen little of that promise so far, the Azzurri only managing to eke out two points from two games. New Zealand on the other hand, a small, rugby-besotted nation that came here with absolutely nothing to lose, produced a heart-warming display of hard, defensive play.

In the run-up to this match, Marcello Lipi said New Zealand would be dangerous in the air, and how right he was. The All Whites got their first goal in the seventh minute when a free kick from distance fell to Shane Smeltz, who put it past Frederico Marchetti. It was a controversial goal, coming off Winston Reid’s head and Fabio Cannavaro, putting Smeltz in an offside position. In all fairness to the assistant referee, it was very difficult to see what was going on in that Italian penalty area.

For the rest of the match, it was almost all Italy, as wave after wave after wave of blue shirts poured into the Kiwi half. The New Zealanders defended hard, refusing to give Italy the space they needed to play their traditional pass-it-right-goal football. The Azzurri were reduced to long shots from distance. That is where the All White goalkeeper Mark Paston came into his own, putting in a brilliant performance to deny the Italians a goal. He was called upon time and again and, on every occasion, his technicality was absolutely spot on. The draw was as much about New Zealand’s rock-hard defence as it was about the goalkeeper’s excellent form.

New Zealand’s physical presence did cause him a few problems, culminating in a penalty that allowed Italy to draw even in goals.

Italy were a subdued and frustrated side, failing to find a way past the New Zealand defence. Not even the introduction of Mauro Camoranesi and Antonio De Natale could change that. They could do very little, eventually opting for crosses into the Kiwi penalty area. But that tactic didn’t work, mostly because Italy were unable to flip too many crosses from deep and, more often than not, the high balls ended up in Paston’s hands. As Italy’s frustration grew, New Zealand’s confidence grew. West Bromwich Albion striker Chris Wood, who came on for Rory Fallon, came within millimetres of producing a win for New Zealand when his shot skimmed past the Italian goal.

Even though they didn’t win, New Zealand will be extremely proud of this result, and rightly so. Italy for their part will go into their next match knowing that nothing less than a win will do.

Marcello Lipi may have made the same mistake that cost Brazil so dearly in the 2006 World Cup – relying on players who are past their prime and who, for all their experience, simply cannot match the energy and determination of younger teams.

A biased opinion, if I may. Why is Vincenzo Iaquinta starting for Italy? His performance so far has been less than convincing.

Marcello Lipi did say prior to the kick-off that they would have to be careful of the New Zealander’s greater height. Set pieces were going to be a worry for his side, apparently.

Italy are wearing black arm bands in commemoration of Roberto Risarro, a former Italian defender who passed away at the age of 66.

Shane Smeltz pounced and scored. Was that or was that not an offside? Another controversial goal

Lipi was not being crazy, then.

New Zealand have only been under 15 or so minutes of intense pressure, and have cracked. The mood has lifted for Italy. The Azzurri are right back in this one.

Gianluca Zambrotta is spending more time making trouble for the Kiwi defenders down the left flank than he is defending. Not that he’s ever really been needed in Italy’s back line.

Iaquinta has been more influential in today’s match than he was against Paraguay.

End of first half

Italy make a few replacements in the second half. Pepe and Gilardino come off for Mauro Camoranesi and Antonio Di Natale, respectively.

Italy are keeping New Zealand trapped in their own half, looking to wear them down before launching devastating runs and shot. Or so one hopes.

New Zealand’s fans have taken their shirts off.  They are on the cusp of something truly extraordinary.