The industrious Dutch break Japan’s iron defence, but only just 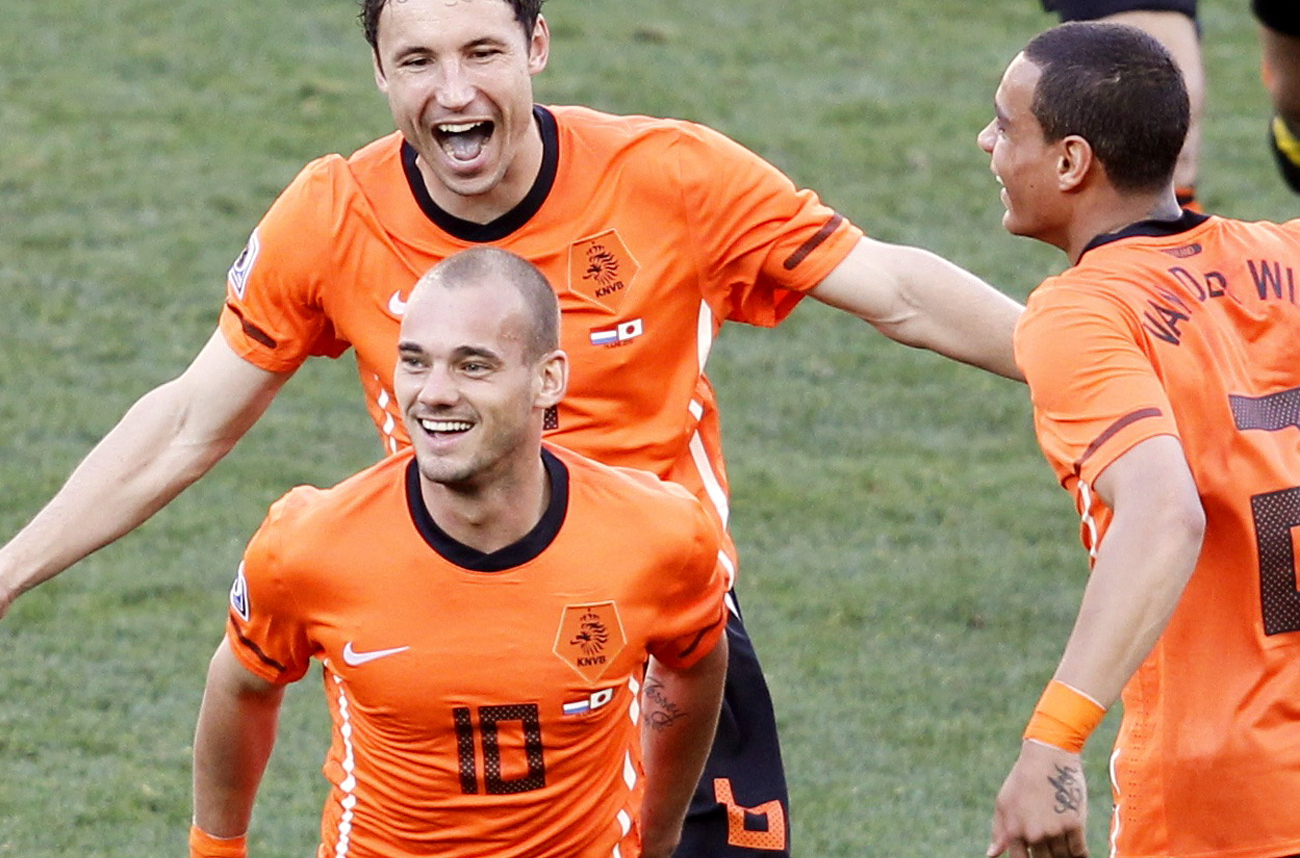 The Netherlands came close to making the same mistake that the German and Spanish side fell for, of dominating possession but not converting it into chances at goals. Fortunately for them, Wesley Sneijder’s shot found the back of the net. After they won the game 1-0, the Dutch have now officially qualified for the next round.

Japan has the most organised and disciplined defence of any team in this World Cup. Takeshi Okado, the Japanese coach, used it as a game-play tactic. The Japanese were quite happy to let the Netherlands keep possession, because they could repel anything that the Dutch threw at them. And so it was in the first half. The Netherlands only had one shot on goal in the entire first half, the shot coming in the 45th minute from Rafael Van Der Vaart.

The Blue Samurai also defended from afar. No part of their half of the field was comfortable territory for the Dutch. Whenever an orange shirt got the ball, he was immediately swamped by two or three white shirts. Unsurprisingly, the Japanese made little effort to attack in the first half. You got the sense that they were quite happy to make a draw of the match.

The Netherlands were, for their part, extremely patient. Perhaps realising the lessons learned when Germany fell to Serbia and Spain to Switzerland, they refused to allow the resolute Japanese defence to frustrate them. They kept the play fluid in their midfield as well, probing and passing, and probing and passing again. The Dutch were also very creative in their tactics, with Dirk Kuyt and Wesley Sneijder often swapping positions in an attempt to draw the Japanese defenders out, but the far easterners maintained their discipline throughout, refusing to break up their line. Photo: Dutch soccer fans hold up a placard which reads “Ok, now we want to have a new dress”, during their team’s 2010 World Cup Group E soccer match against Japan at Moses Mabhida stadium in Durban June 19, 2010. REUTERS/Michael Kooren

All that changed in the 53rd minute when Robin van Persie set Sneijder up for a shot. Kawashima tried to catch the shot but spilled the ball into his own goal. It was a bizarre decision by the Japanese keeper, who should have opted to punch the ball away. He seemed to have been completely unsighted by the ball’s flight. His error and Sneijder’s goal opened play up completely. The Japanese were forced to go raiding into the Dutch half, looking for a goal.

Maarten Stekelenburg was called on to fend shots time and again, as the Japanese game play was turned on its head. Suddenly it was the Netherlands with their backs up against the wall, and the Japanese probing for holes in the orange defence.
Dutch substitutes Eljero Elia and Ibrahim Afellay brought speed into the Dutch side, and they were able to make several promising breaks. Afellay made the same dreadful error on two separate occasions, choosing to shoot instead of passing to his team mates. His coach, Bert van Marwijk, will demand an explanation, no doubt.

It was a deserved victory for the Dutch, who now have two wins from two games. Japan can take something away from today’s encounter – a similar performance against Denmark on Thursday should see them through.

Both the Netherlands and Japan have made no changes to their squads.

There were weather concerns in the build-up to this match, but it’s all sunshine in Durban this afternoon.

Komano has been stretchered off. There’s a touch of blood on his face, but he’ll be back on.

Dirk Kuyt attempted a spectacular bicycle kick. It would have been the most dramatic goal of the tournament had that one gone in.

The Netherlands have 75% of the possession at the moment, which gives you an idea of how little of the ball Japan is seeing.

The Netherlands are being forced to pass the ball back to their central defenders a lot. Every time an orange shirt gets the ball within the Japanese half, he’s immediately swamped by two or three white shirts.

Japan have a bit more purpose to their play now, challenging the Dutch for possession.

The Netherlands have yet to have a shot on target. The Japanese are quite impregnable.

End of first half

As clever and nimble as the Dutch are, they’re going to have to think up something really clever to unlock this Japanese puzzle. Eljero Elia might just be the key here.

Change of tactics for the Dutch here. They’re favouring the use of long balls into the penalty area. Replay shows that the ball took a huge deflection off Kawashima. Why didn’t he just punch the shot away? He completely misjudged the ball’s flight.

Wes Sneijder’s goal has opened play up nicely. Both sides are being more adventurous in their attack.

End of second half.