Ghana’s Black Stars fight boldly, only manage a draw against the 10-man Ozzies 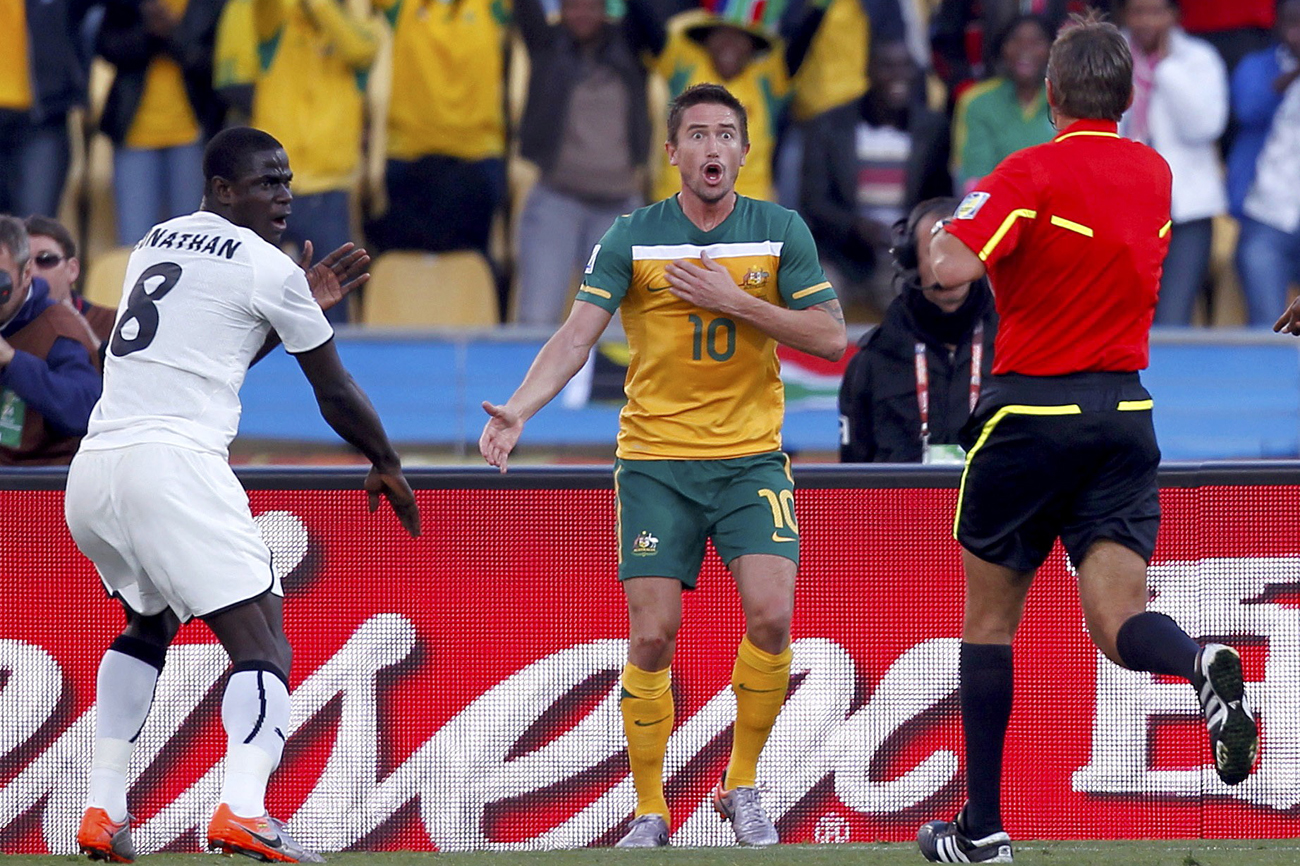 It was one more game in which both sides fought valiantly and both sides refused to give up. At the end, the result, 1-1, was a fair representation of both sides’ efforts. Pity about the refereeing, again.

Following the heavy defeat by Germans in the first round, not too many pundits could see the Australian team bouncing back in any meaningful manner. But bounce back they did: their 12th minute lead came as a surprise to everyone but the Aussie team, it seems. And just as Ghana started to claw its way back into the game, there came another one of the defining moments we’ve learnt to expect from refereeing in this World Cup:

Mensah’s sharp shot from some eight metres was flying straight into the net, only to be stopped there by Harry Kewell. The ball, as fast as it was, seemingly hit his arm. Referee Rosetti had no qualms about awarding a penalty to the Ghanaians and red-carding a shocked Kewell, who repeatedly asked him to see the reply. And if Mr Rosetti actually saw the detailed slo-mo, he would have almost certainly not made the decision that ended up standing and changed the complexion of the game. Strangely enough, just a split-second before, Aussie captain Neal committed a foul on Asamoah that should have been a penalty, but no one would have been red-carded.

The bad refereeing robs the both teams in the game, even as one of them end up with one player more. Some part of the magic is lost: the essence of every game, the very source of soccer’s magic is to have two sides of almost equal strength, when both of them can win and have to play their hearts out to succeed. Being given a numerical advantage or handicap is simply not good. As Kewell was banished to exile, and Gyan coolly converted the penalty, it was reasonable to expect that Ghana would now dominate the rest of the match. And yet, somehow it turned not to be exactly like that, even as the Australian team was now seriously lacking an attacking specialist. What they lacked in numbers, the Aussies richly made up in courage. They managed to play 75 minutes, during which not for a second were they the junior partner in a great match. Having brilliant Mark Schwarzer as the goalkeeper also richly helped.

Even as all the games in Rustenburg appear to be destined for 1-1 draw, this one was different. Both teams played strongly and honestly and it was truly obvious.

With Serbia’s win over Germany and Ghana’s draw with Australia, Group D is now wide open. Hopefully, the Ghanaians will find energy in their young feet to send Germany to World Cup 2010 oblivion. Now, wouldn’t that be a great picture?

Aussie coach Verbeek had no choice but to include Harry Kewell, whose fitness is under serious doubt and is mostly a mid-fielder. Essentially, Australia will play today without a real, true-blue forward. And their team is one of the oldest. Hmmm.

Both sides show they want to attack. It really doesn’t make sense for them to play for a draw today. They are contesting every ball. The Ozzies are very encouraged by their early, and probably unexpected, lead. The Ghanaians will probably have to take some time to recover from the shock.

The Australians ability to attack is severely impacted by Kewell’s red card. He was already a lone attack player in today’s squad; it will now be very difficult for them to score more goals. Things are not looking good for Australia.

Ghana is controlling the ball very well. Ghana is the youngest team at the World Cup, Australia the oldest. Australia will be very worried about the second half. Probably their best shot will be a tough draw.

Even with 10 players, Australia is not lying down and waiting to lose.

As the game draws to an end, the Australians look physically in better shape than the Ghanaians.