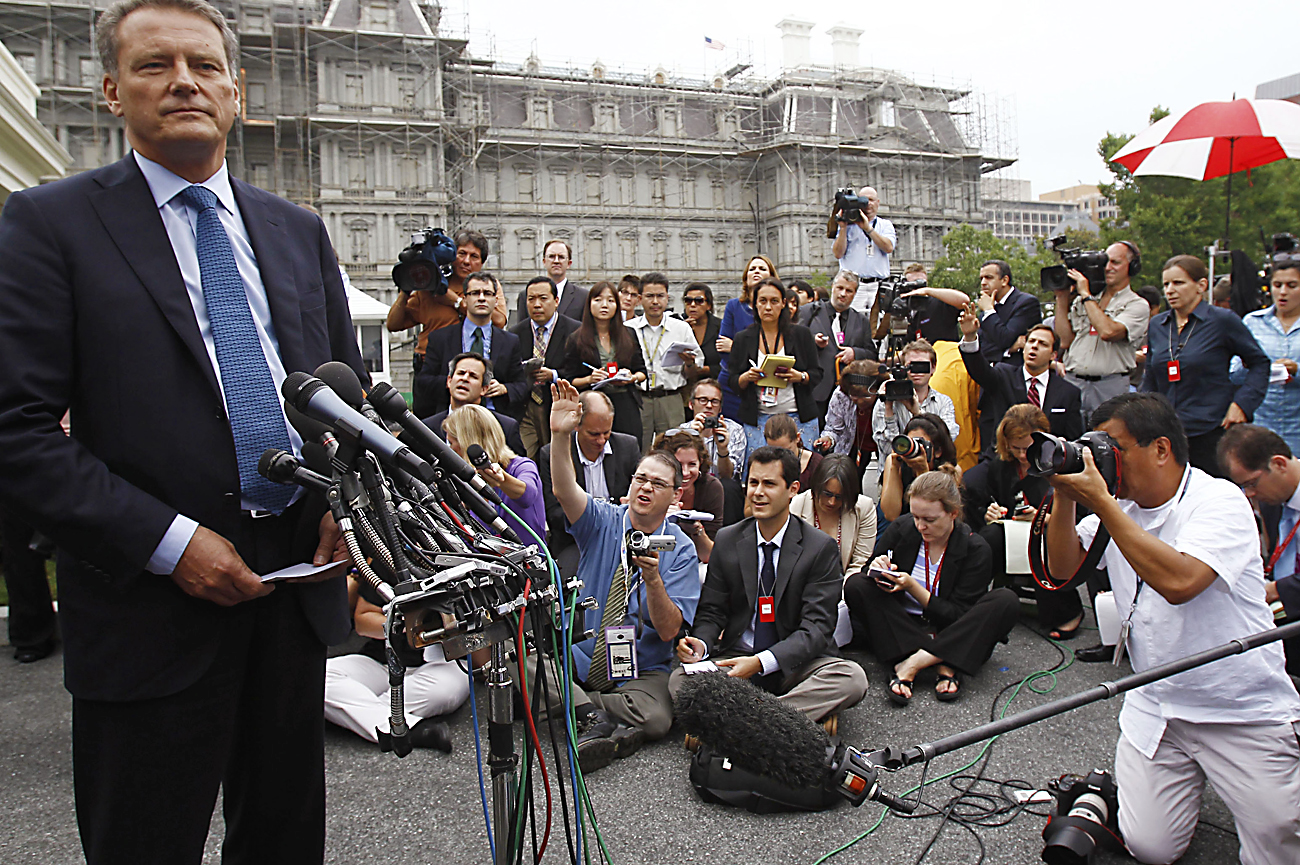 The company that gave the globe the biggest manmade environmental disaster is notching up a few new records. BP is fast becoming the world’s most disliked brand. The company’s gaffe-prone CEO has become America’s public enemy number one. And the corporation’s handling of the Gulf of Mexico oil spill will go down as a case study of how not to manage a disaster.

BP and its British-born US CEO Tony Hayward have given the likes of Bill Maher, Jon Stewart, Jay Leno and Jimmy Kimmel enough funny fodder for more than just a while. Jokes from Maher and Leno offer exacting insight with perfect brevity on just how badly BP has destroyed its own reputation

“BP is saying that the oil leak is bigger than they estimated. In a related story, the executives at BP are far bigger idiots than we estimated.” –Jay Leno

If BP is a bunch of lying weasels, then the lying weasel-in-chief would be Tony Hayward who was hired as the energy company’s head honcho to (in his own words) “restore confidence” and to concentrate on safety with a “laser-like” focus. Hayward then went on a $4 billion cost-cutting drive which is said to have “influenced” the Gulf of Mexico oil spill as BP cut safety corners and rationalised to the point of negligence.

Hayward’s the man who was quoted in The New York Times telling his BP cohorts, “What the hell did we do to deserve this?” The families of the 11 people who lost their lives in the explosion on the Deepwater Horizon drilling rig that precipitated the oil spill, and millions whose lives are being terribly affected, may well be asking themselves the same question.

Shortly afterwards Hayward told The Guardian “the Gulf of Mexico is a very big ocean. The amount of volume of oil and dispersant we are putting into it is tiny in relation to the total water volume”. Experts now believe as much as 100,000 barrels of oil is being spewed into the ocean daily – hardly a comparative drop in the ocean. Hayward’s next statement, this time to SkyNews, underscored his downplaying of the disaster: “I think the environmental impact of this disaster is likely to be very, very modest.”

But this was nothing compared to Hayward’s ultimate gaffe on the Today Show: “There’s no one who wants this over more than I do. I would like my life back.” A comment, which in part inspired the New York Daily News to call him “the most hated and most clueless man in America”.

Hiding behind Hayward is the incredible disappearing man Carl-Henric Svanberg, BP’s chairman. Conspicuously absent during much of the crisis until called to account by US President Barack Obama, Svanberg went on holiday days after the explosion happened and the oil started gushing. Like Hayward, Svanberg is equally gaffe-prone and in a comment to journalists referred to people in the Gulf as “small people” when he said: “I hear comments sometimes that large oil companies are greedy companies or don’t care, but that’s not the case with BP. We care about the small people.” BP’s crisis management efforts are a litany of disaster themselves. They’ve played the blame game by trying to make partners Halliburton and Transocean scapegoats for the spill. They’ve refused help. They’ve denied environmental scientist access to the site. They’ve barred journalists from the spill site. Media reports now show that BP has been sitting on a legacy of internal investigations that detail negligence, short cuts and gagging staff who wanted to report problems.

“They certainly have been hopeless and some of the things that Tony Hayward has said to the public and media have been astonishing,” said Yellowwood Futures chairman and brand expert Andy Rice. “One of the lessons BP has clearly not learned is that in nine cases out of 10, the best response to something like this is complete honesty and transparency. They have basically fudged it.” Rice said the relationship between consumer behaviour in society and in the marketplace is getting stronger every day. “More and more consumers are keeping a very close eye on corporate brand behaviour before they choose the purchase brand they are going to favour.” Boycott BP designs, T-shirts and spoof adverts are flooding the Internet and it won’t be long before public anger turns into public action.

Independent marketing and communications strategist Clive Simpkins says BP has badly underestimated both the oil spill and the public backlash to it. “In our very environmentally aware and social-media connected world, BP has underestimated the lasting damage they’ve done to their reputation. Kill animals and damage the environment, and people will hate you – even though they demand your products to drive their cars. If one looks at the fallout in social media, people are driving past BP service stations to use another brand. A token perhaps, but reflective of the sentiment.”

Simpkins says BP should fire Hayward as quickly as possible. “Make him the sacrificial lamb – now. The ineptitude occurred on his watch and he’s exacerbated it. Bring in someone with genuine empathy, good emotional and social intelligence and superb communications skills.”

That’s a sentiment Obama shares. He said that if Tony Hayward was his employee, he’d have been sacked.

Following a meeting with Obama at The White House, BP executives agreed to cancel dividends and to pay $20 billion in compensation for victims of the oil spill. That’s roughly equal to one year’s profits for BP. A step in the right direction that may be, but BP will have to make an entire pilgrimage in steps to even have a chance to recover its mortally wounded image. It remains unclear if they will ever succeed in that.

Photo: BP Chairman Carl-Henric Svanberg speaks to the media after a meeting with U.S. President Barack Obama at the White House in Washington, June 16, 2010. REUTERS/Jim Young