The World Cup Day that was: 15 June

The World Cup Day that was: 15 June 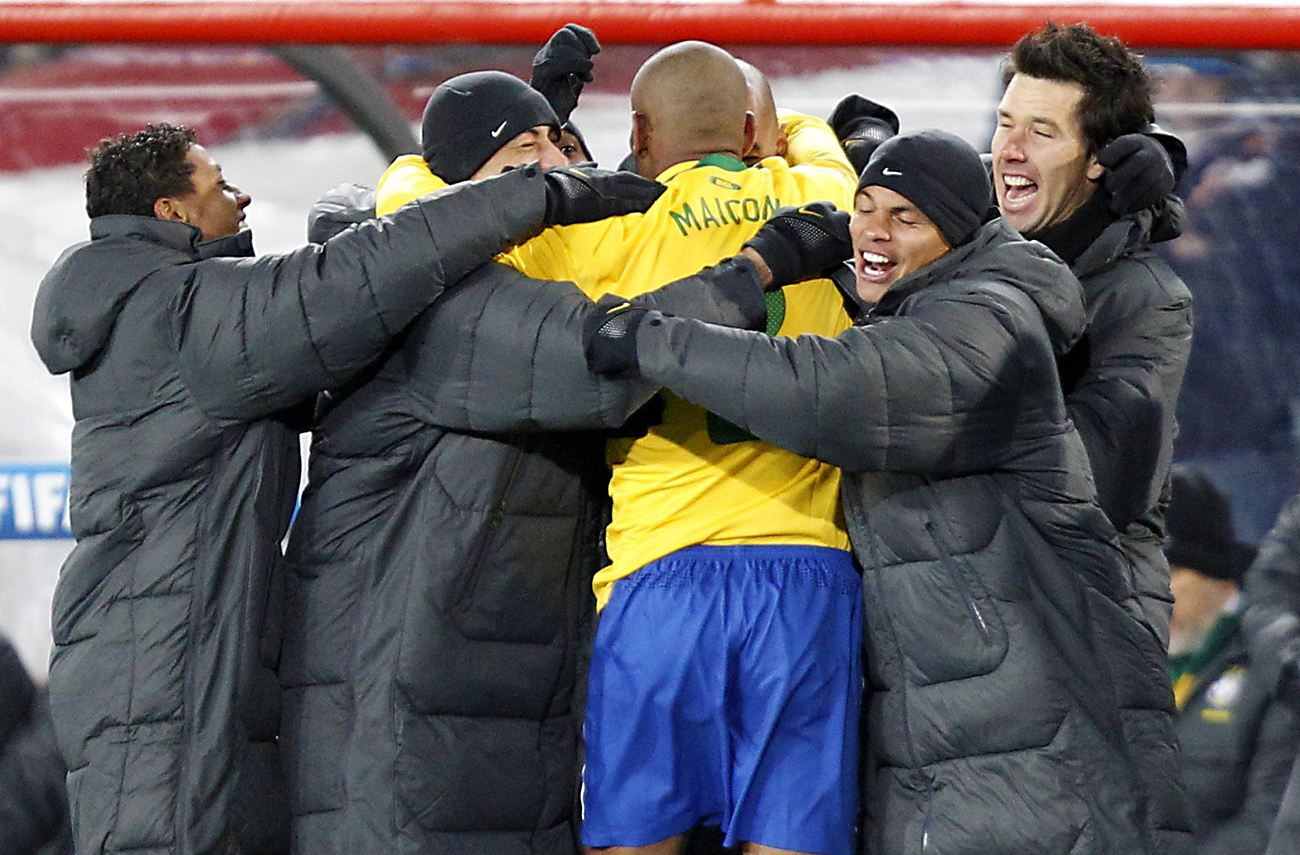 At the Netherlands vs Denmark game on Monday about three dozen schmodel types wearing revealing orange mini-dresses were questioned by Fifa about their part in an ambush marketing attempt (and a pretty successful one at that) by Bavaria breweries. While there was no obvious branding on the clothing, the dresses they wore were the same as those given out in Holland during a Bavaria promotion in April. Of course, some Dutch fans would’ve made the connection instantly. But, even in a media landscape that works at the speed of Twitter, the story (and by “story”, we mean publicity for Bavaria) probably wouldn’t have been picked up quite so speedily, or grown so fast, if Fifa hadn’t such a fuss. Bavaria 2. Fifa 0. Photo: The girls entered the stadium and stripped of their Danish outfit to reveal the Orange miniskirt designed by Dutch beer brewer Bavaria. The Dutch foreign ministry has asked the South African authorities to explain why 36 girls wearing orange dresses were forcibly removed from the stadium, media reported. Picture taken June 14, 2010. REUTERS/Michael Kooren

The Canadian Press, The Guardian

R10.9 million. That’s the most up-to-date amount spent by government departments on purchasing World Cup tickets for staff and “special guests” (we thought state departments were supposed to be on the receiving end of the bribe equation, but it appears not). Only the departments of sport and international relations were authorised to buy World Cup tickets, but this didn’t stop the eight other departments and state-owned entities from spending taxpayers’ money on tickets without permission. On Tuesday the National Health and Allied Workers’ Union (Nehawu) called for the departments at fault to repay the money, as well as for an investigation. The union’s demand will have more weight if Cosatu backs it, or they could choose to play the passive-aggressive card and wait until the audits for the 2009/10 financial year come in. Finance minister Pravin Gordhan doesn’t miss much, and it won’t be any fun being the departments in the naughty corner.

Slovakia played New Zealand in Rustenburg to a 1-1 draw. The game between the country that used to be joined to the Czech Republic and that other country where they play rugby didn’t garner much attention before kick-off. On paper, Slovakia were clearly going to win. Off paper, nobody cared in a group dominated by Italy and Paraguay. But viewers were in for a few surprises, with New Zealand standing up to Slovakia in the first half before conceding a goal in the 50th minute. The Kiwis seemed deflated, but their fortunes turned around in injury time, when Reid headed the ball into goal. Score! It was New Zealand’s first ever point in the World Cup and a draw is as good as a win for them.

Ivory Coast vs Portugal was an eagerly anticipated match, especially so because it seemed crucial to each team to win it. That said, neither side managed to score, producing an end result we have become all-too-familiar with in this tournament: 0-0. Fans, undaunted by the bucketing rain, were hugely excited when Didier Drogba (cast and all) came on after two-thirds of the game, but the world’s third-ranked player failed to net that vital goal. It must be difficult for him nursing an injury, but it will probably be up to him to step up if the Elephants are to have any chance of advancing to the second round.

The Daily Maverick, The Telegraph, M&G

In the 2010 group of death, North Korea (make that Korea DPR, we don’t want to upset the Dear Leader now, do we?) was seen as the team the other three teams didn’t really have to worry about. They were wrong. Sure, the North Koreans lost to Brazil 2-1, but that’s nothing to sniff at, and the Ivory Coast and Portugal will have the best chance if they swat up their strategies rather than turn up their noses. The North Koreans were efficient, dedicated and – one thing that’s been splendid about their country’s isolation – they don’t seem to have learnt about the concept of diving. They might have earned one point rather than three, but even Kim Jong Il must be proud of them. They’re also the first losing side to have scored a goal this World Cup (think about it for a second).

Soccer-related prayer ceremonies have been hosted around the world over the last few weeks, with supplicants all praying for the success of their particular team. But not even God can make everyone a winner. (Okay, he may have allowed a fair number of draws recently, but, ultimately, the World Cup format makes it a zero-sum game.) A couple of guys in Brazil have taken a different approach – voodoo. Go to their website and you can order a voodoo figure representing any team, although Argentinean dolls have been particularly popular. And yes, needles are included. Effigies representing the Argentinean and Brazilian coaches are also for sale, although there aren’t any of Fifa officials, yet. We’ll probably have to wait until 2014 for that.