Portugal and Ivory Coast produce, wait for it, another...

Portugal and Ivory Coast produce, wait for it, another draw 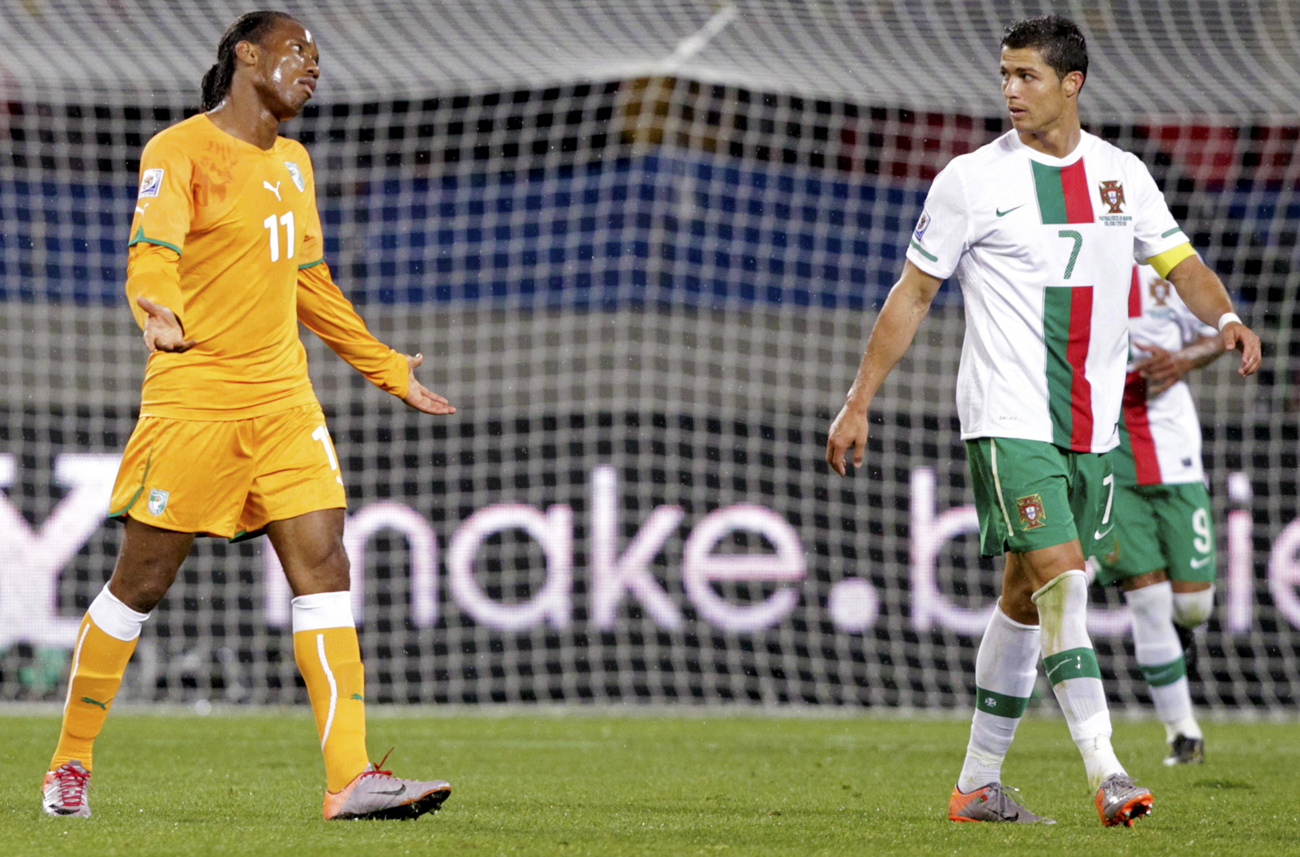 It was a match that promised to deliver, but failed to live up to its promise as Ivory Coast and Portugal played to a 0-0 draw. Portugal were expected to do better than Ivory Coast, especially considering that the iconic Ivorian captain Didier Drogba started on the bench with a broken arm. It turned out that Ivory Coast was a more than able opponent.

Ivory Coast put in a great first half, dominating the physically smaller Portuguese, and finding their stride quickly to place enormous pressure on the opponents’ defence. There was a heart-stopping moment in the seventh minute as Chistiano Ronaldo fired in a thunderous shot that rattled Boubacar Barry’s side post. But the Ivorian defence rallied quickly, and managed to keep him quiet for the rest of the half. The Ivorian defence’s hard game produced the typical result from Ronaldo: plenty of diving. Bruno Alves, who is captain for FC Porto, would have been far more inspiring with the yellow arm band. Deco, the other creative player in the Portuguese side, was a shadow of his former self as he failed to find the gaps in the Ivorian defence.

The Ivory Coast defence was strong, not only managing to keep Ronaldo and Deco out, but launching runs from deep within their half. Kolo Toure was the more inspiring of the two captains, making several crucial tackles and rallying his defence. He struggled with cramp towards the end of the second half, but fortunately was not sidelined by it. The gigantic Demel also stood out,

An Ivorian player who had a most exciting game was 23-year-old Gervinho, who asked many questions of the Portuguese defence. He could have been sharper in his finishing, but full credit to him for being an influential wing player.

Salomon Kalou was a mere shadow of his normal self, losing several crucial battles and snuffing out what would have been good scoring opportunities for the Elephants. It was disappointing play from a great player, and he was eventually substituted for Didier Drogba, who had an immediate impact on the game’s mood. He was clearly nursing his injured arm though, and shot a good opportunity wide. He will most certainly go on to make a greater impact on future games, but perhaps he will feel that he should’ve capitalised on tonight’s opportunities.

Portugal struggled to find their form in the first half, and Ivory Coast should have scored. Although they eventually found their stride in the second half, the game ended in a draw. A fair result, given that both teams played cautiously, perhaps too aware of the looming game against Brazil to commit fully to this game.

Didier Drogba, the iconic Ivory Coast striker and captain, has not made the starting line-up. Aruna Dindane, who takes up the attacking role, has enormous shoes to fill… Kolo Toure gets the captain’s armband for this match.

Christiano Ronaldo did not score a single goal in the qualifying stages, nor did he get a single assist. Neither side is looking to make a slow start here, as neither can afford a loss – not with a game against Brazil looming. Ivory Coast have made some hard runs and crosses into the Portuguese box, but none have made it to the strikers yet. Drogba is looking very anxious on the bench. I would be too.

Ivory Coast is in Portugal’s half a lot, and rightly so. They’ve been the hungrier team, but Portugal’s defence has been up to the task so far.

A Mexican wave goes around the stadium. The crowd here in Port Elizabeth is opting to make their own entertainment as the game slows.

Ivory Coast have done well to keep Christiano Ronaldo quiet, and to limit Deco’s option. They’ve looked the more fluent side in attack, but they have to translate that into shots at goal if they’re going to take anything from this match.

Ronaldo is being his usual sullen self. If Ivory Coast keep this up, might we see the Portuguese captain’s tears too?

Is it Gervais or Gervinho? All the team starting line-ups say it’s Gervais, but he has Gervinho on his back.

Ivory Coast will score if they continue like this.

Rain starts falling in Port Elizabeth. Play will get sloppier if it doesn’t let up soon.

Drogba is warming up and you can sense the shiver of excitement run through the Nelson Mandela stadium. Ronaldo fires a shot into goal after the whistle goes. The Ivory Coast players aren’t amused, and I’m inclined to agree. Not very sporting.

The Portuguese have found their stride, and are starting to dominate the game. Drogba’s impact on the game has been minimal, so far.

Kolo Toure goes down with a cramp. The Ivory Coast coach Sven Goran Eriksson grimaces, and he seems to feel Toure’s pain.

Well, it’s been a quiet 15 minutes. Ivory Coast are guilty of letting Portugal find their feet.

The game remains goal-less by the end of second half.