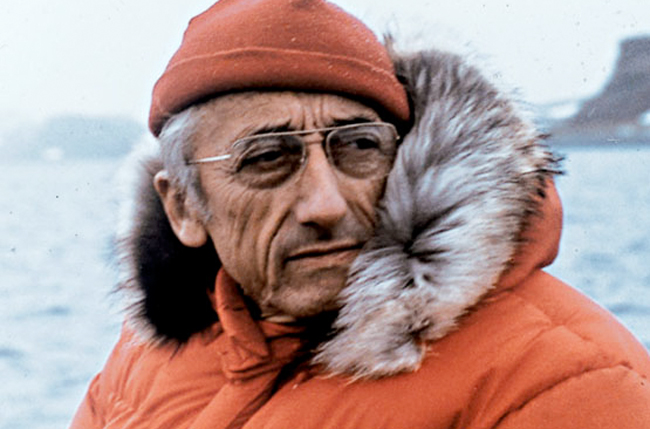 It is fitting that the centennial milestone of the man who opened the world’s eyes to the wonders of ocean life and helped us to breathe underwater will be marked with year-long festivities that include the re-launch of his beloved ship, Calypso.

The ship that inventor, ecologist, researcher, author and much-awarded filmmaker Jacques-Yves Cousteau spent much of his life aboard to give us our first glimpses of deep-sea life is being refurbished and will sail again to maintain his legacy.

“People protect what they love.” That aphorism voiced by le Commandante Cousteau was his life’s work and purpose. Born on the 11 June 1910 it would take another 26 years before Cousteau would fall in love with the sea. It happened when his friend Philippe Tailliez lent Cousteau a pair of underwater goggles to look at marine life.

He describes the experience and the effect it had on him in his book “The Silent World, A story of undersea discovery and adventure, by the first men to swim at record depths with the freedom of fish.”

“One Sunday morning … I waded into the Mediterranean and looked into it through Fernez goggles…. I was astonished by what I saw in the shallow shingle at Le Mourillon, rocks covered with green, brown and silver forests of algae and fishes unknown to me, swimming in crystalline water. Sometimes we are lucky enough to know that our lives have been changed, to discard the old, embrace the new, and run headlong down an immutable course. It happened to me at Mourillon on that summer’s day, when my eyes were opened to the sea.”

Cousteau would often talk of “making love to the sea.” ”I loved touching water,” he once wrote. ”Physically. Sensually. Water fascinated me.” Water, the oceans and all they contained would prove a life-long love affair for Cousteau that would serve humanity well.  Cousteau’s work and legacy is the product of his wanting to make humanity fall in love with the sea, just as he did on that sunny Sunday morning in Toulouse.

To achieve his goal, Cousteau created over 120 television works which he refused to call documentaries, but instead called “adventure films”. He wrote and co-authored more than 50 books including his first “The Silent World” which by the time of his death on 25 June 1997 had sold more than 5 million copies in 22 languages. But Cousteau’s influence stretches way beyond getting the world to fall in love with the oceans and fiercely championing marine conservation.

Instantly recognisable by his gaunt silhouette and red knitted cap, Captain Cousteau helped invent the aqualung (better known by its acronym self-contained underwater breathing apparatus or scuba) when he was 33. This was arguably one of the most significant inventions of the 20th century enabling man to explore under water for extended periods and opened a window to a whole new world that had until then been mostly undiscovered by mankind.

Other Cousteau inventions include underwater cameras, filters, lenses and lighting techniques that enabled his film-making and allowed people to see the underwater world in his “adventure films”. He founded two organisations dedicated to the protection of ocean life – the Cousteau Society and its French counterpart, l’Equipe Cousteau.

“If he were alive today, my father would surely be awed by the technology and skill behind the work of his cinematic successors, who share my father’s philosophy that ‘people protect what they love – and we love what enchants us’,” said the legend’s son, Pierre-Yves Cousteau, himself an oceanographer of world renown.

“He would be gratified by the creation of marine protected areas in many countries and by the growing community of scientists working to advance understanding and conservation of ocean biodiversity, such as those completing the first Census of Marine Life and its inventory of ocean species. Watch: Salvage workers labour aboard the deck of the research vessel Calypso as it is raised from the sea bottom in Singapore January 25, 1996. Jacques Cousteau’s famed oceanographic vessel was finally refloated today after days of salvage work to raise the ship, which sank January 8, 1996. Reuters

“However, I know he would also be distressed by the ongoing pillaging of oceans by industrialised fisheries, by those who decimate the seabed and indiscriminately harvest fish and by-catch by the shipload, by the catastrophes that stem from exploiting off-shore oil resources, and by the acidification of seawater due to greenhouse gases, which threatens the health of all life on Earth.

“In this year, the 100th anniversary of his birth, we owe it to his memory to ensure that the spirit of Jacques-Yves Cousteau and his work inspire new generations,” says Pierre-Yves.

To continue Captain Cousteau’s legacy the Cousteau Society and l’Equipe Cousteau led by his widow Francine are refurbishing the Calypso as a touring educational exhibition.

Sunk and badly damaged when a barge accidently rammed into it one year before Cousteau’s death, Calypso’s upgrade will include Cousteau-designed one- and two-person mini-submarines, underwater scooters, aqualungs, diving suits, cameras and other equipment used during Cousteau’s filming expeditions which won him numerous Oscars, Cannes’ Palme d’Ors and Emmys.

“It has been many years since this renowned ambassador for the seas and oceans last sailed,” said Captain Cousteau’s widow Francine. “We are extremely pleased and excited by the prospect of her touring again – the inimitable iconic Mona Lisa of the ocean – to continue the mission of Jacques-Yves Cousteau’s life, fostering appreciation for both the beauty and fragility of the seas.”