Cautious optimism as Newsday hits the streets of Zimbabwe 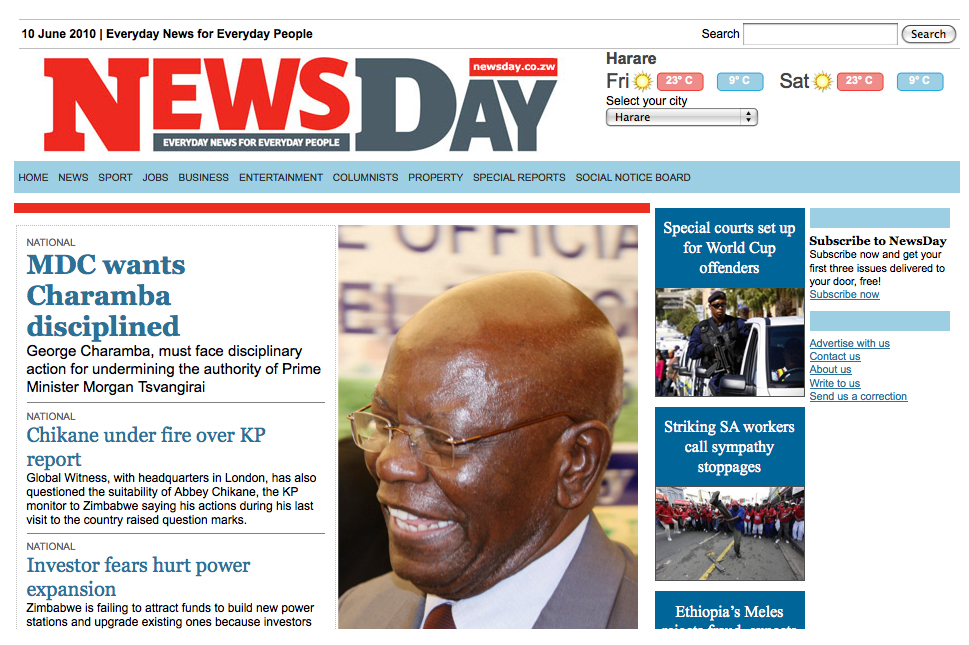 Change was the biggest obstacle to the launch of NewsDay in Zimbabwe this past week. Not democratic change. Or progressive media change. But a lack of common currency or coins that vendors could offer as change to people to mobbing them for independent news. The Daily Maverick spoke to Trevor Ncube in Harare about the launch of his new daily independent.

“It is difficult to describe in words. I was so emotional. I love my country and was convinced that Zimbabwe needed a daily that is professional and ethical, that would help with nation building and national healing. We’ve been a sick society.”

Those are the emotions of Trevor Ncube, who this past week launched NewsDay, an independent daily that will offer Zimbabweans news and analysis free of propaganda for the first time in seven years. Zimbabweans have been force fed a daily stable of government disinformation courtesy of Mugabe’s Zimbabwe Newspapers but that changed when the recently formed Zimbabwe Media commission granted four new licenses to independent papers in a breakthrough for media freedom in the country. The owner of M&G Media, which publishes Mail & Guardian, Ncube owns two other Zimbabwean papers (The Standard and The Zimbabwe Independent) alongside the newly launched NewsDay.

Watch: NDTV’s report on Zimbabwe’s media monopoly being broken by NewsDay and others:

On the first day that NewsDay hit the streets 80% of its print run was sold. It could have been higher if the newspaper wasn’t hamstrung by the problem of a lack of loose change. “The main hurdle we’re facing is change. The paper retails for 50 US cents but there are no coins in Zimbabwe at the present moment. We provided what we called tokens so readers were offered a token as change.” Readers who mobbed vendors as the paper launched were offered a token that would allow them to buy a copy of NewsDay the next day, but the paper didn’t have enough tokens to meet demand which has slowed sales.

“People are very hungry for independent news. You could see the excitement,” said Ncube, adding that the granting of media licences is the biggest step the inclusive government has taken to normalise the political situation in Zimbabwe. “The sense is that without a free media there are limitations placed on people in terms of how they can participate in the national discourse. The registration of four independent newspapers is seen as an extension of the democratic space. This is the first time in seven years that Zimbabweans are able to buy a newspaper other than that which is produced by the government. That is a huge step forward,” said Ncube.But the mood in Zimbabwe is one of cautious optimism because the repressive laws that realised state control of the media and enabled media harassment and the closure of independents are all still in effect. Then there’s the matter of Tafataona Mahoso, who’s referred to as “the hangman” in Zimbabwe media circles with good cause. Mahoso is currently installed as chief executive officer of the Zimbabwe Media Commission (ZMC), and oversaw the Zimbabwe Information Commission that was the precursor to the ZMC. He directed the closure of a number of independents during his tenure.

“Mahoso oversaw the closure of newspapers during the most oppressive period in the history of Zimbabwe. What has changed for him? Where did he get the change of heart that he can be trusted to be a democrat?” asked Ncube. Mahoso pens a retrogressive column in one of Mugabe’s newspapers and his dictatorial rants are much cause for concern. “It makes you worried that this kind of man with these kinds of thoughts steers the ZMC, which is supposed to help expand the democratic space in Zimbabwe, which is supposed to bring about tolerance in the country,” says Ncube.

Zimbabwe’s media legislation could also prove a headache for the newly launched independents. The three laws that have proved damning to media freedom in Zimbabwe in the past are The Public Order and Security Act, The Access to Information and Protection of Privacy Act, and the Criminal Law (Codification and Reform) Act. “Those three pieces of legislation are loaded against freedom of expression. It is still a precarious time for independent newspapers, which is why we shouldn’t run ahead of ourselves and why we need be cautious. Nonetheless, we have a duty and that duty is to fearlessly inform Zimbabweans,” said Ncube.

The big challenge will be to make these new independents viable in a bleak economic environment. On this score Ncube is more hopeful. “It is not smooth sailing by any stretch of the imagination; in fact it is very difficult. But the situation is improving with dollarisation of the economy and there is a sense that things in Zimbabwe are beginning to normalise, particularly over the past six or so months.”

A free media is a good start for the expansion of democracy in Zimbabwe, which could prove beneficial to the economy. But Ncube is right about being cautious. In many ways a free and independent media is only the beginning of the beginning.