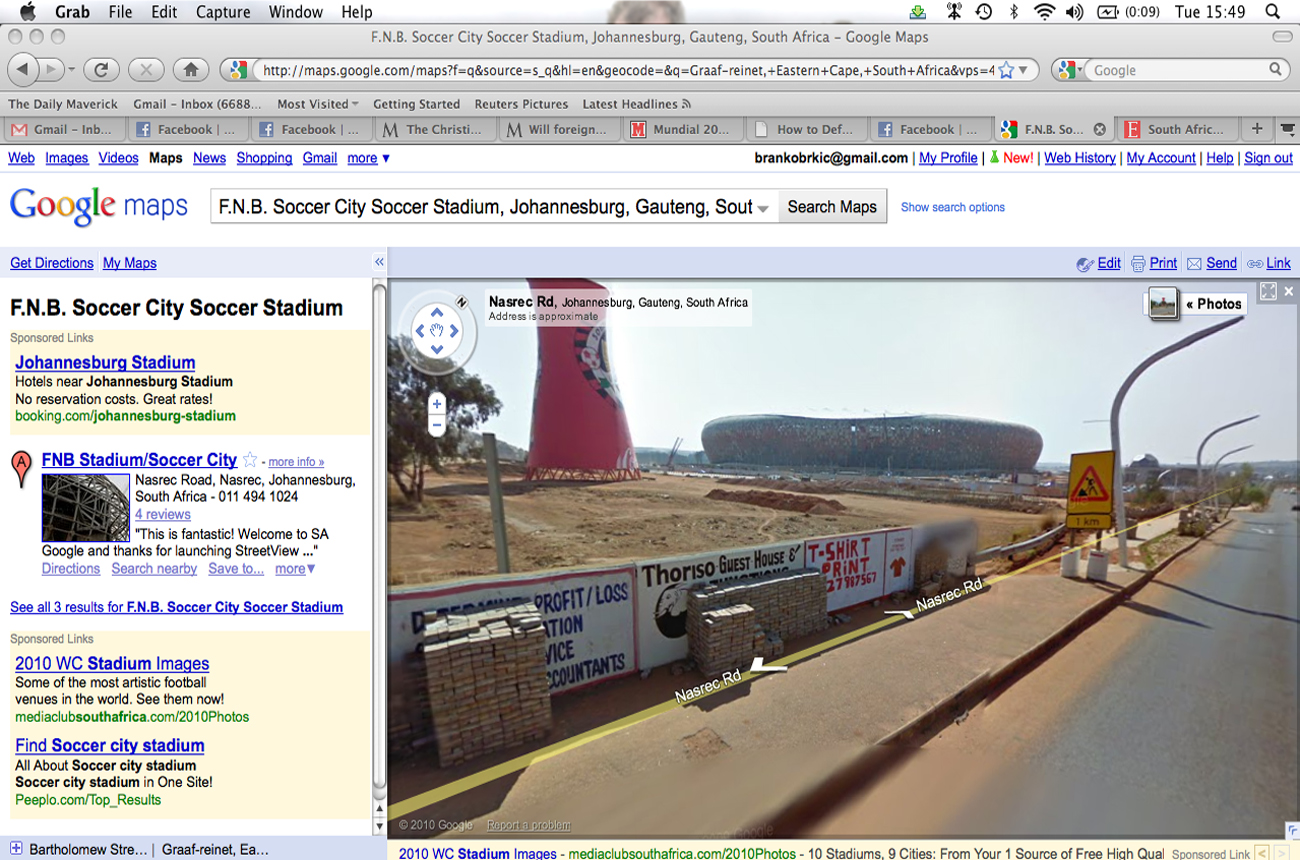 As of Tuesday morning, South Africa is finally represented on the Street View map. Who says we’re not benefiting from the World Cup? Now we’ll be able to explore the stadiums (in 3D nogal), without leaving ikhaya.

There’s no doubt that Google wouldn’t have chosen South Africa as the latest country to add to its grand project of photographing the globe (or at least its streets) if we hadn’t been hosting the World Cup. And, so far, Google seems to have been marketing its Street View presence in South Africa primarily for the benefit of tourism.

While Julie Taylor, communications manager for Google SA, acknowledged the project was “a first for Africa”, she largely focused on the tourism potential and was quoted in Memeburn as saying, “But it’s also going to be a massive bonus for the tourism industry, especially with all the international visitors arriving in South Africa. Tourists will be able to take a look at sights and stadiums before they get here, while the rest of the world can enjoy the view from their mobile phone or PC.”

We’re definitely with her in advising tourists to check out South Africa on Street View before they get here. Never mind the shock of not seeing lions, elephants and assorted buck in the streets, they might get a heart attack at our super-slow Internet speeds.

But forget the visitors, Street View will also be a useful tool for locals over the next month. Those who are too precious to share our spectacular scenery with trashy tourists can visit Table Mountain in isolation from their computer screens. Those who are too poor (or too principled) to pay an entrance fee to Fifania can check out the stadiums from the comfort of their homes (in 3D, if you use Google Earth). Street View is fairly simple to use from the Google Maps platform. Once you’ve zoomed in on a specific street, you just need to click on the pegman icon and drag it to the point of interest, then use your mouse to swivel your view. And there’s nothing quite like zooming in to find your childhood home, or current place of work (bonus point if you can spot your car parked outside). Twenty-seven South African towns and cities are available on Street View, including most of the major centres and, bizarrely enough, Newcastle.

But before we get too excited about our new-found voyeur’s view of South Africa, it’s worth remembering the global rollout of Street View has been far from smooth. Residents of Saskatoon, Canada, are unhappy that their city was photographed during the unflattering winter months. Belfast believes the service poses a security risk. And Denmark has said it is illegal in terms of that country’s privacy laws. Actually, a whole lot of countries, from Greece to Japan, have expressed their concerns about privacy issues, and Switzerland went so far as to sue Google in November (the case is still pending).

All over the world, many people have become pretty upset about having their images uploaded onto Street View without their knowledge (until their friends pointed and laughed, presumably). Those who’ve been particularly upset have been snapped in the act of kissing, having a piss or throwing up. Perhaps they should’ve been conducting these activities behind closed doors in the first place?

But there is recourse. If, after spending the next few days trawling through Street View pics of your neighbourhood, you find an image insulting to your dignity, you can report it by filling in an online form. Now that all the stadiums officially belong to Fifa, we wonder how long it is before the soccer body gives Google a call for copyright infringement?