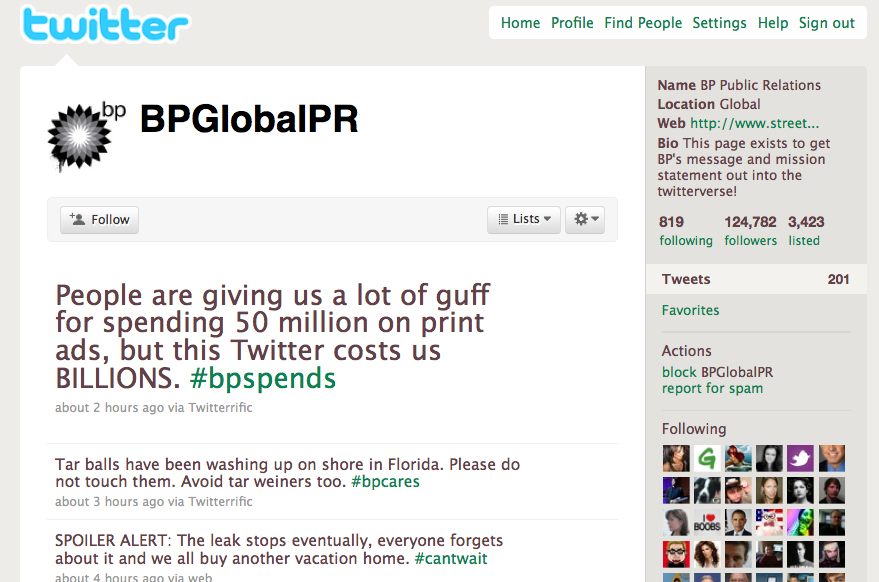 First BP spilled a whole lot of oil in the ocean, destroying marine life and damaging the offshore drilling sector. Then an anonymous tweeter created @BPGlobalPR. The oil company is still trying to clean up the mess; the Twitter account is faring rather better, having generated its very own Internet meme.

As oil continues to spurt into the Gulf of Mexico, defying BP’s hapless attempts to stem the flow, the only thing growing faster than damage to the ocean is the number of people following @BPGlobalPR on Twitter. What, you don’t care? But #bpcares. So do 124,782 people, and counting.

Just short of a month after the Deepwater Horizon oil rig exploded and millions of barrels of oil began spewing into the sea, @BPGlobalPR opened a Twitter account. According to the bio: “This page exists to get BP’s message and mission statement out into the twitterverse!” Okay, not really. The official BP Twitter account is @BP_America, which spews out company spin as fast as it, well, spews oil. @BPGlobalPR, on the other hand, is a laugh a tweet.

The first tweet on 19 May was a paragon of understatement: “We regretfully admit that something has happened off of the Gulf Coast. More to come.” The tone of the tweets swiftly changed as the spin doctors started to do their work. “If we can make it so the ocean can be set on fire, doesn’t that make us like the David Copperfield of oil?”

The Twitter account kept its momentum, and gained followers, owing to the timeliness of its tweets, as well as the invention of a fictional BP executive called Terry, who’s basically an overgrown frat boy on 700 grand a year. Sample Tweet – “@BPTerry: day 1 of prankwars. i brought in donuts filled w/ oil for everyone. got the cleaning lady to eat one. shes in the ER! #terryprankwars (sic)”.

The @BPGlobalPR campaign is the brainchild of someone (or possibly a group of people) who identifies himself (themselves) only as Leroy Stick. In character, @BPGlobalPR handed out a few tips on The Guardian website last week, describing the business of public relations. “Our job is to step in and engage the public while villains hide out and look for legal loopholes so they can make money again.”

But, as well as having a laugh, Stick has a point to make. He released a statement on Thursday, saying: “I started @BPGlobalPR, because the oil spill had been going on for almost a month and all BP had to offer were bullshit PR statements. No solutions, no urgency, no sincerity, no nothing. That’s why I decided to relate to the public for them. I started off just making jokes at their expense with a few friends, but now it has turned into something of a movement.”

Stick’s advice to PR executives is to cut the bullshit and keep it simple: “You know the best way to get the public to respect your brand?  Have a respectable brand.”

A flurry of “copycat” Twitter accounts resulted: you can now follow @UNGlobalPR (“We work very hard to produce little or no results as evidenced by our victory over hunger in Africa.”), and @ShellGlobalPR (“We’ll have you know we spilled some cooking oil in the staff kitchen and had it cleaned up in less than 5 minutes. #justsayin”), among several others.

South African tweeters have got in on the act. The rumours of an @MalemaGlobalPR account are untrue, although blogger and columnist Sipho Hlongwane (@comradesipho) did post under that hashtag on Thursday saying, “The British land today. We must denounce these colonialists! Bloody agents!”. However, @OraniaGlobalPR has turned to the Internet to advance its cause: “We’re not separatists. Damn typos! Separate artists! We are separate artists. Now that’s cleared up, can we have our Volksstad now?”

But our favourite instance of the @GlobalPR meme has to be @FIFAGlobalPR. We don’t know who’s behind this account, (it’s not the Hayibo.com crew – we checked), but they’ve got Fifa’s arrogance and sense of entitlement down pat. Fifa’s location is menacingly entered as: “We are everywhere”, and the logo is Photoshopped to read “Fifania 2010”. @FIFAGlobalPR’s favourite hashtag is #weownyou, with its contribution towards the World Cup spirit reading: “Happy Football Friday everyone! Remember: Anyone not wearing their *licensed* football shirt will be shot.#weownyou”. The one thing – perhaps the only thing – BP has done right in its handling of the oil spill has been not to cause a fuss about @BPGlobalPR and ask Twitter to shut down the account. We hope Fifa follows this example. It’s time for that organisation to stop worrying about its precious copyright and start concentrating on enjoying the soccer. But Fifa isn’t known for playing nice, so don’t forget this friendly reminder from @FIFAGlobalPR: “Important notice: FIFA name conventions also apply to casual conversations with friends. We are always listening: use that TM!”