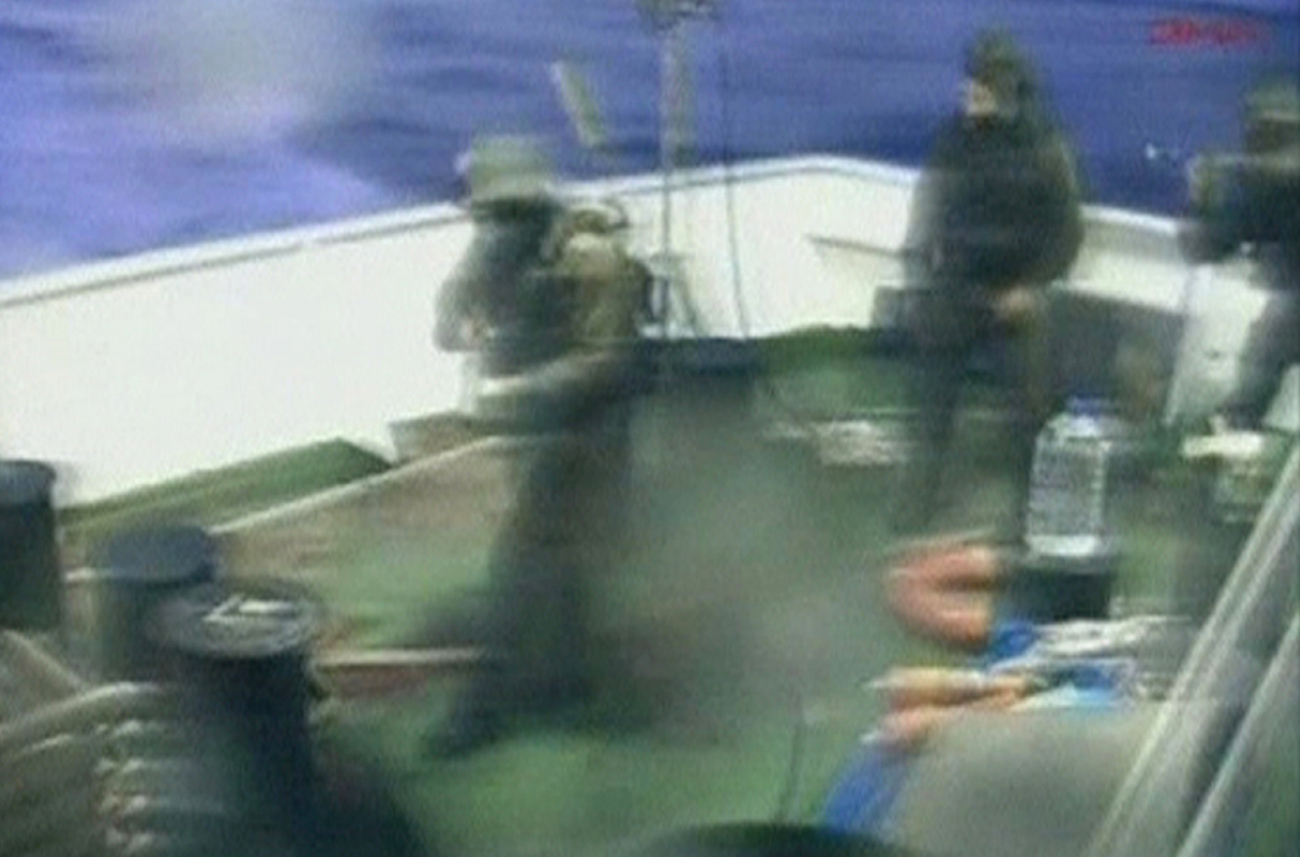 For a secret commando raid, it took place almost live on the world’s TV screens, and nothing about it seems to have gone according to plan. Now the fallout is coming fast and furious.

An international coalition of groups intent on delivering food and other aid to the residents of the beleaguered Gaza Strip had sailed their six ships from Turkey after announcing intentions. In response, the Israeli navy announced it would stop them. And we were off to the races.

In the past, Israel has enforced a blockade of its two Gaza borders (the third entry point into Gaza is via Egypt), ostensibly to prevent further arms flows into that small slice of territory, now effectively controlled by the militant Hamas faction. Gaza’s population is about 1.5 million Palestinians, most of whom are virtually dependent on external aid for their basic needs.

The Israelis have insisted, contrary to much evidence, that they have been allowing sufficient supplies to reach the people of Gaza. In contrast, aid groups have been insisting that only a small fraction of the needed food and supplies has been allowed to enter the territory since the Israelis began their blockade that took serious effect after Israeli-Hamas hostilities in 2008.

And so, on Monday, in seeming action movie-style tactics, Israeli commandos rappelled down from helicopters and onto the decks of the Mavi Marmara. Depending who you believe, between 10 and 20 people died in the ensuing fight. The commandos apparently first tried to overwhelm the ship’s crew and accompanying passengers into submission through “shock and awe”, by putting them thoroughly off-balance with paintball guns. But the people on the ship retaliated with an array of tools and iron bars, and then the shooting started – with the Israelis’ original attack plan now clearly blown to pieces in the melee. The video footage now seen by the world shows passengers fighting the troops as they land on the ship. In response, one Israeli commando has told how the passengers fired at his forces, and beat them with metal poles and knives. He told the media, “We landed barehanded, and they lynched us.”

For a military that has earned a redoubtable reputation over the years as damned near invincible, this effort will not be getting any unit citations. It took place on television screens around the world as cellphone video clips quickly made their way into the global digital media stream and into everyone’s lounges. And it should be noted that none of the fatalities were Israeli either.

As the people on the ship were being off-boarded, this disembarkation was taking place peacefully and the Israeli Defence Force said the nine who died in the attack and the 37 injured now in Israeli hospitals were the very ones who had instigated the violence. Five soldiers were treated for wounds.

The IDF added that those now being detained come from some 40 nations and that the group includes a two-year-old child. Counting the people on the flotilla as a whole, the Israelis say there were 679 people in all. Most were Turkish or Greek, but Serbians, Omanis, Pakistanis, Malaysians, Macedonians, Yemenis, Kosovars and Bahrainis were also on board.

After the attack, Balad, an Israeli-Arab political party said on behalf of Hanin Zoabi, one of those captured: “Those who should be questioned are Barak and Netanyahu, who gave the order for an armed takeover in the middle of the sea. Behind this crime are criminals who should be interrogated.” The war of words begins. Photo: Israelis stage a protest outside Turkey’s embassy in Tel Aviv against Turkey’s support for the Gaza-bound ships May 31, 2010. REUTERS/Ronen Zvulun

In Turkey, effectively Israel’s lone ally in the region, popular anger has provoked multiple demonstrations and the Turkish government has reacted nearly as furiously, demanding apologies and an end to the blockade of Gaza. Relations with Turkey appear to have been badly damaged by Monday’s events, possibly irreparably. Turkey has recalled its ambassador to Israel and cancelled all joint military exercises with Israel. At the UN, Turkey’s foreign minister Ahmet Davutoglu called the raid “murder conducted by a state” and demanded an immediate Israeli apology, international legal action and an end to the blockade. You can probably bet your last shekel there will be a major international investigation into the events. Inevitably, too, there are demonstrations in cities across Europe and the UN’s Security Council met into the night in New York as well.

As this is being written, Israeli forces have been disembarking people from the aid flotilla in Ashdod’s harbour and taking them into custody. Gadijah Davids, a South African radio reporter from Radio 786 in Cape Town, is among those being processed for transfer to holding cells near Beersheva in the Negev Desert. In contrast to other prisoners who technically are being held by the immigration authorities, Israeli-Arab citizens from the flotilla are now in police custody. It is still unclear what will happen to the foreign nationals taken into custody – will they be deported or will they face criminal charges?

Almost certainly there will be no net gains from this Israeli action – except for support for Hamas, the people of Gaza and their cause. The Israelis have severely complicated any hope for progress towards a Middle East settlement – piecemeal or comprehensively. Similarly this action will put stress on Israeli-American relations. The raid will almost guarantee increased attacks by Hamas on Israel’s territory. Beyond this, any moral high ground the Israelis hope to claim vis a vis Hamas’ continued attacks has been almost fatally compromised.

By attacking a ship that was clearly in international waters, posing no imminent threat to Israeli territory, people or forces, Israel has handed its critics a major opportunity to criticise it for its violations of international law. Taken together with the critique of its behaviour in the earlier Gaza fighting contained in the Goldstone report, Israel has opened the door rather wider to being labelled a state that operates outside international law.

As a result of this attack, Benjamin Netanyahu’s consultations with the US government have now, suddenly, been postponed and the Obama administration, after offering “deep regret” over the raids, must certainly be recalibrating just how much its support for Israel will cost it in the larger Islamic and Arab worlds. And how much pressure it must now put on Israel to dial back from its confrontationist stance. The US recently began mediating indirect peace talks between Israel and the Palestinians following a 17-month breakdown in contacts. These will almost certainly be suspended for months ahead.

For the US, a seriously complicating factor is the sheer number of countries represented by the foreign nationals who were on board the ships – and who are now being held by Israeli authorities. Most of these countries are also American allies or friendly nations – something with which the Americans will have to deal. This showdown came at a sensitive time for Israeli-Palestinian peacemaking and Netanyahu had hoped to receive a high-profile expression of support from Obama after months of strained relations over Israeli settlement construction. He shouldn’t hang around his mailbox for that one.

The seizure of the ships, passengers and materials on board will almost certainly provide a rationale for increased Hamas attacks on southern Israel – something that already began on Monday night. This, in turn, argues for a whole new spiral of violence – something the Israelis were almost certainly not looking for as the result of their action on the open seas. While no one is predicting a new outbreak of war, this action is not going to push the region towards peace.

Within Israel itself, there may be two consequences. First, it may put pressure on the current government, as some supporters may feel this is the right time to move away from the Netanyahu government. Additionally, it is going to put some pressure on the military to review its planning and decision-making capabilities. Aside from the apparent failure of the overall plan to capture the ships with little bloodshed, it points to decision-making that does not take into consideration the broader political environment. What military planner decided, for example, that this capture only needed paint-ball guns? Were the planners the same people who so evidently misjudged the military’s Gaza strategy two years ago? This looks like a far cry from the kind of planning that characterised the famous raid on Entebbe two generations ago. Ultimately, one wonders why the Israelis determined that a complex, risky airdrop onto ships on the open seas was their best option, as opposed to a slower, more deliberate quarantine of the Gaza coast with careful, calibrated inspections of ships to allow legitimate supplies to be off-loaded. That would have given them a share – albeit disputed – of the moral high ground rather than where they sit now.

Somebody clearly forgot the lessons of the Cuban Missile Crisis quarantine when President John Kennedy weighed the life-and-death options facing the US and the USSR in 1962. In deciding on slow, deliberate and carefully evaluated operations, Kennedy famously said, “It’s always some SOB who doesn’t get the word.” Maybe Netanyahu should go back and read some of the histories of that earlier confrontation. Maybe he should have done that last week.

Main photo: Israeli commandos are seen on a Gaza-bound ship in the Mediterranean Sea in this frame grab taken from footage released by DHA on May 31, 2010. Israeli commandos intercepted Gaza-bound aid ships on Monday and at least 10 pro-Palestinian activists on board were killed in bloodshed that plunged Israel into a diplomatic crisis. REUTERS/DHA via Reuters TV