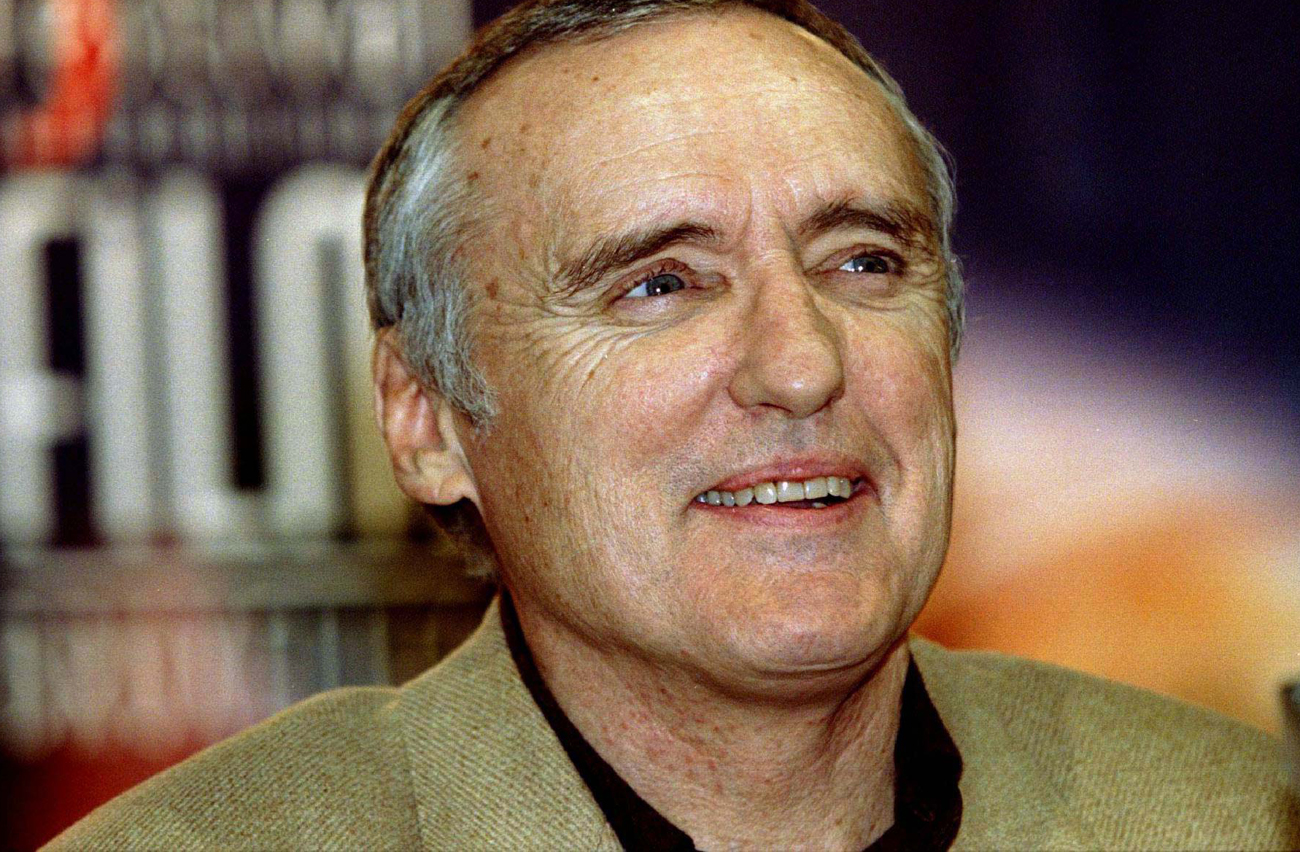 He was a supremely talented and brilliantly crazy actor, director, wild man and a consistent discoverer of the attractive side of madness. His creations ranged from genius to banal, from meaningful to just plain awful. But while others dreamt about that fabled “maybe, one day”, Hopper sucked the marrow out of life.

Hollywood’s certified wild man, Dennis Hopper’s career began with small roles in “Rebel Without a Cause” and “Giant”, but then came his astonishing iconic cult classic, “Easy Rider,” and the actor and director and legend laid skid marks across the face of cinema forever.

For people such as Hopper, spawning cosmically disastrous flops like “The Last Movie” seem obligatory. But they were also the foil for a series of life-imitating-art-imitating-life roles in “Apocalypse Now”, “Blue Velvet”, “Hoosiers” and “Speed”. Clustered around were the hundreds of TV episodes, nearly 100 other films, as well as some over-the-top, classic TV commercials for Nike and professional football.

Hopper died of prostate cancer on Saturday at his Frank Gehry-designed home in the Los Angeles beachside community of Venice. He was 74.

Twice nominated for an Oscar, Hopper never quite touched the statuette, though he finally had his star unveiled on Hollywood’s Walk of Fame just two months ago. Actress Marlee Matlin called Hopper a “maverick, a wonderful actor. You always got something unexpected from him.” After scoring early success being cast in those two James Dean signature films, Hopper’s career took a really serious wrong turn with his reputation as a tantrum-throwing, alcohol-guzzling and drug-using wild man.

Hopper once so infuriated John Wayne that The Duke chased him off the set of “True Grit” with a loaded pistol. When he sporadically worked, Hopper played supporting roles in films like “Cool Hand Luke” and “The Sons of Katie Elder”.

Despite his reputation as virtually uncontrollable, it was all forgiven when Hopper came together with another struggling actor, Peter Fonda, an unknown Jack Nicholson, and script writer Terry Southern, to direct and act in a story about two pot-smoking, drug-dealing hippies, Wyatt and Billy, who take a motorcycle trip through the Southwest and on to the Mardi Gras in New Orleans. Their journey became the ultimate bad trip, and the film became a monster hit.

Produced for less than $400,000, “Easy Rider” earned that back a hundred-fold, giving Hopper real street cred in Hollywood for new projects. When it came out in 1969, “Easy Rider” was a hit at Cannes and, 40 years later, it ranks among the American Film Institute’s top 100 films. The august US National Film Registry ranks it among the top “culturally, historically, or aesthetically significant” films.

“Easy Rider” found the sweet spot with audiences and studio heads alike, encouraging a whole new run of low-cost films that made use of inventive photography and themes about the young, restive, baby-boomer generation.

As a story, “Easy Rider” can be read like a reverse version of Huckleberry Finn. Instead of heading out for the territory and freedom, “Easy Rider’s” road buddies take the profits from their monster cocaine drug deal and then travel across the southwestern US, backwards-seeming, east towards New Orleans, picking up Nicholson’s character along the way, and then rolling on to their rendezvous with death.

Hopper’s success with “Easy Rider” saw Universal Pictures give him a budget of nearly a million dollars for his next project, “The Last Movie”. It took Hopper a year to make the film through a drug-fuelled haze. It was a catastrophic bomb that made Hopper something of a Hollywood leper for a decade.

But, then, in 1979, Hopper made the first of several remarkable comebacks in Francis Ford Coppola’s 1979 Vietnam War epic, “Apocalypse Now.” Hopper played a bummed out, hypo-manic photojournalist in the film – and his astonishing portrayal apparently owed much to his actual drugged-out state. His real-life rambling chatter ended up being used in the film’s actual final cut. After “Apocalypse Now,” the alcohol and drugs continued. A stay in a detox clinic got him off alcohol, but cocaine was still part of his life and he became so hallucinatory he ended up in the psychiatric ward of a Los Angeles hospital.

And then there was yet another spectacular return for some great films. He joined Alcoholics Anonymous, quit drugs and in 1986 he was an Oscar nominee as an alcoholic ex-basketball star in “Hoosiers” with Gene Hackman before he appeared in David Lynch’s cult classic “Blue Velvet” as a wild druggie bad guy in a portrayal that earned his character a spot on AFI’s list of the 50 all-time movie villains. His final big role was in the 1994 action flick, “Speed,” together with Keanu Reeves and Sandra Bullock, though Hopper also had a role in Kevin Costner’s 1995 ecologically dystopic film, “Waterworld”. This strange, overblown film was also a commercial flop, but Hopper’s role as yet another villain may have been the best thing about it.

In recent years, Hopper played an avaricious TV self-help guru, Dr Luther Waxling in “Search and Destroy,” and his last major appearance was in 2008’s  “Elegy” with Sir Ben Kingsley, Penélope Cruz and Debbie Harry (that’s not bad company for a failure). He was in NBC’s 2005 television series “E-Ring”, cancelled after 22 episodes. He also played the part of record producer Ben Cendars in “Crash” and, with Jon Voight, Kelsey Grammer and James Woods, took part in the 2008 TV comedy “An American Carol”.

When Hopper first became an actor, he was contracted to Columbia Studios and then to Warner Brothers while still in his teens. He studied at the redoubtable Actors Studio in New York with Lee Strasberg before moving to guest roles on various television shows. Hopper appeared in nearly a 150 episodes of TV shows, including “Gunsmoke”, “Bonanza”, “Petticoat Junction”, “The Twilight Zone”, “The Barbara Stanwyck Show”, “The Defenders”, “The Big Valley”, “Time Tunnel”, “The Rifleman” and “Combat!”

Some 15 years ago, Dennis Hopper also made some wildly anarchical commercials for Nike and American professional football, sending up some of his own most memorable cinema roles. More recently he became a pitchman for a financial services company, publicly donated money to the Republican Party, but then voted for Barack Obama in 2008.

Summing up Hopper’s life’s work in The New York Times a month ago, Manohla Dargis noted that “Variety” film columnist (and former studio executive) Peter Bart had written of Hopper that he “excelled as an actor, filmmaker, art collector and photographer and has done everything he can to self-destruct in each of those arenas” and that it seems “impossible someone could have starred in a film like ‘Giant’ only to blow his career as a star, or to have directed a seminal movie like ‘Easy Rider’ only to disappear as a filmmaker.” But Dargis conceded Hopper’s roller-coaster career and life were because he had “charted his own course nearly from the start”.

Along the way, Hopper also established a reputation as a photographer, painter and sculptor. His show opens in July at the Los Angeles’ Museum of Contemporary Art. Hopper was also a serious collector of contemporary art. He worked on an art project with the famous Dadaist painter/sculptor Marcel Duchamp and his photography even included studies of the Rev Martin Luther King Jr. He collected carefully – including buying a few Andy Warhols for a rumoured $75 each.

Hopper had complex relationships with women, married five times and had four children. Late last year, Hopper was diagnosed with prostate cancer and earlier this year his cancer had reportedly metastasized to his bones.

In March this year, a gaunt and very sick Dennis Hopper showed up, together with Jack Nicholson, to receive his star on Hollywood Boulevard. Nicholson, hovering nearby his dying friend, wore an extraordinarily garish shirt decorated with the stars and stripes – an homage to “Easy Rider.

Throughout Hopper’s life, his personal affairs had at least as much drama as his acting and Hopper famously said of his eight-day marriage to Michelle Phillips, of The Mamas and The Papas, that the first seven days were great, but that eighth day was not nearly as good.

Hopper will forever straddle that chopped-hog in his shades and cowboy hat. Ride on, Dennis, ride, ride on.

For more, read the AP, the New York Times, the Washington Post