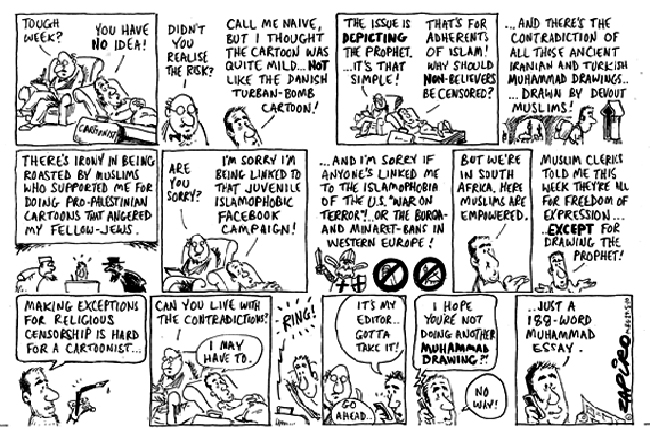 The standard response of Jonathan Shapiro, aka Zapiro, when something he draws causes a reaction he considers to be unjustified is to publish another, more offensive cartoon. He hasn’t done that this time? Or has he?

Zapiro’s cartoon in the Mail & Guardian on Friday was unique for a number of reasons, not least of which was the fact that the acclaimed cartoonist revealed more of his personal philosophy in this one submission than he’s perhaps ever offered in his work. It was the equivalent of a narrative journalism piece where the “I” of the writer is foregrounded, a soul-searching feature of the type Rian Malan might write, and so it took the reader (or, in Zapiro’s case, the reader/viewer) into a place where the stakes were firmly established.

The piece opens with Zapiro reclining in the same analyst’s couch he drew the prophet Muhammed lying in a week ago, uttering the words, “Other prophets have followers with a sense of humour.” This time, it’s the analyst who opens the exchange, with a pointed question for Zapiro: “Tough week?” The cartoonist’s response says it all. “You have no idea.”

But now we do have an idea, because Zapiro invites us to observe the fraught and complicated knot of issues, paradoxes and principles that must have kept him up for nights on end in mid-May. The first of these was the question of the risks, which Zapiro addresses via a comparison to the “Danish turban-bomb cartoon,” an item that sparked riots after it was published in Denmark by Jyllands Posten. Held up against that inflammatory attempt at satire, Zapiro tells the analyst that he regarded his own effort as “quite mild”.

The analyst, clearly a good one, isn’t buying it. “The issue is ‘depicting’ the prophet,” he says, “it’s that simple.” Zapiro, no slouch himself, is a step ahead. “That’s for adherents of Islam! Why should ‘non-believers’ be censored?” Which is arguably the core of the matter when it comes to why Zapiro does what he does, why he’s so revered, why he’s such an important voice in South African society. He didn’t censor himself before the apartheid government (and he was jailed for it), he doesn’t censor himself to appease big business, and he certainly doesn’t censor himself to please the ANC – he is unequivocally the person who takes most seriously Section 16 of the South African constitution, the part where freedom of expression is enshrined. So how can he censor himself before what Christopher Hitchens once termed “Islamofascism”?

Zapiro obviously asked himself the very same question. He tells the analyst of “the contradiction of all those Iranian and Turkish Muhammad drawings…drawn by devout Muslims!” He speaks of the “irony in being roasted by Muslims who supported [him] for doing pro-Palestinian cartoons that angered [his] fellow Jews.” And he says, in response to the analyst’s query about whether there’s remorse, that the only thing he’s sorry for is that he was linked after publishing his Muhammad cartoon to Islamophobic campaigns in the United States, Western Europe and on Facebook.

Then he gets to why he thought South Africa may have been different – “Here Muslims are empowered.” Unstated in Friday’s Mail & Guardian cartoon is that while there were death threats, there was no rioting in the streets. Also unstated is the fact that, as Mandy de Waal reported in The Daily Maverick on Thursday, a meeting took place this week between Muslim leaders, Zapiro and senior Mail & Guardian representatives that ended in agreement: a joint statement was issued acknowledging the sensitivities and committing to a review period, during which time no images of the prophet Muhammad would be published. All Zapiro says to the analyst about the meeting is: “Muslim clerics told me this week they’re all for freedom of expression… ‘except’ for drawing the prophet!”

Does Zapiro think the meeting may have been a capitulation on the Mail & Guardian’s behalf? Perhaps. His modus operandi when something he publishes causes a shit-storm is to come back the next week with something harder; Zuma’s showerhead and Malema’s oversized watch are symbolic of just such an attitude.

“Making exceptions for religious censorship is hard for a cartoonist,” Zapiro tells his analyst, just before agreeing that he may have to “live with” the contradiction. And then, typically and beautifully, he (the real Zapiro, Jonathan Shapiro) ends the cartoon by emphasising the depth of the contradiction: during a phone-call from his editor, who hopes Zapiro is not “doing another Muhammad drawing,” he says no, “just a 188-word Muhammad essay.”

To reiterate, the significant thing here is that while there was a lot of anger, there has so far been no violence or rioting. Unlike in Western Europe, the response of both sides in this debate has been to sit down and discuss the issues. Zapiro may have been hamstrung for the first time in his life, but, as highlighted in the cartoon on Friday, he’s still managed what no other cartoonist in the modern world has achieved – he has moved this most incendiary and volatile of topics into a more moderate realm.

Read more: see the Zapiro cartoon on the Mail & Guardian website; read The Daily Maverick on the Muhammed cartoon meeting between Muslim representatives and the M&G.