Cosatu threatens strikes during World Cup, should Sepp be worried? Nah, not really. 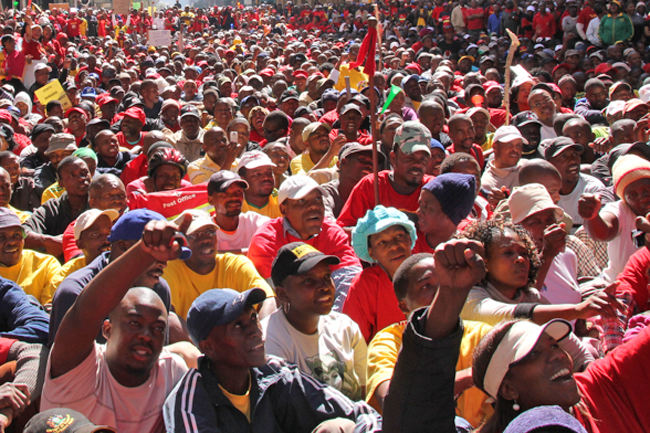 Cosatu is furious at the planned electricity hikes. It’s the one issue they really cannot stomach. They’re ready for a big national strike. We don’t know how this will end, but we’re fairly confident the World Cup is safe.

To ask a union federation the immortal question; strike or no strike, is to get a wholly predictable answer. And before we go any further, we should just mention, that those well-known hard workers, the French, know a big event is always worth striking over. So when Cosatu said, after Thursday’s central executive committee meeting it would be “tantamount to a state of emergency to deny workers their rights during this period”, yes, there is a little bit of gamesmanship going on here.

Good. We like people who have an eye on the main chance, and aren’t afraid to be pretty public about it.

Either way, the real question is not should they strike, but will they strike. And the answer to that is no. We may bet a few drinks over this, but Cosatu’s top leaders, particularly Zwelinzima Vavi, are way too canny to allow the headline “Cosatu ruins SA World Cup” to become a reality. But if you’re a union leader in a fairly uneasy alliance with the ruling party, and you think they’re playing dirty when it comes to electricity prices, you’d be a complete moron not to use the huge gift history has given you.

So we’re not really taking Cosatu’s claims too seriously. But they do underline an important point. To bring this country to a complete halt, you really do need Cosatu. Only they can bring the organisation and discipline and force big enough to matter.

Which leads us nicely to Cosatu’s central executive committee’s next point. It’s hidden deep within the federation’s statement, but it contains a bullet. Not for us, the worried middle-classes, but for the ANC, and particularly, President Jacob Zuma. It’s not entirely new either, but it matters. Cosatu is threatening to hold a special national conference. So what, you may ask. It’s that the preceding sentence contains the phrase “workers will not be used as voting cattle. Cosatu will not sign a blank cheque”.

It looks like Cosatu has been applying some serious thought to its usual problem, how to get the ANC to do what it says it will do, or more succinctly, how to make sure it still has influence within the Tripartite Alliance. And it’s decided that a useful tactic might be to threaten to hold a conference next year. In April. A full 18 months before the ANC has to hold its national conference and elect new (or the same) leaders. And 18 months is just enough time to create a new party.

Don’t get too excited. It’s not going to happen. But it’s a measure of Cosatu’s impatience with the ANC that it’s willing to go this far.

It’s also willing to have another go at our favourite pack of young lions. Cunningly, you won’t find any mention of the ANC Youth League or the words Julius Malema anywhere. But they do have a real go at tendepreneurs, and say that they are being “isolated”. In Cosatu-speak it is “The new tendency is rather a small group of people united in a campaign to take control of the movement for their narrow programme of accumulation of personal wealth”.

Thanks Zweli, we got it. Breitling watches are so out this year.

But there’s more to come, because Cosatu can be bigger than many around them. Despite being on the receiving end of many a media missile, it is willing to include underpaid journalists in the following made-for-radio soundbite: “The tendency has been abusing its limited access to the state to launch secret and illegal investigations against all those identified as a problem. They are desperately trying to silence every person they identify as an opponent be it within the alliance or among the journalists.”  In other words, yes, we believe the Youth League is using a spy to make up stuff about journalists and other political opponents (conflict alert, the writer is one of the 19 political journalists who have laid an official complaint against Julius Malema). Cosatu is always about flying its colours from the mast. They don’t like Malema, or people like him, and they’re happy to say it. In alliance language at least.

The ANC/Cosatu dance is bound to continue. But more than ever, one partner will have no qualms about stepping on the other’s toes.

(Grootes is an Eyewitness news reporter)