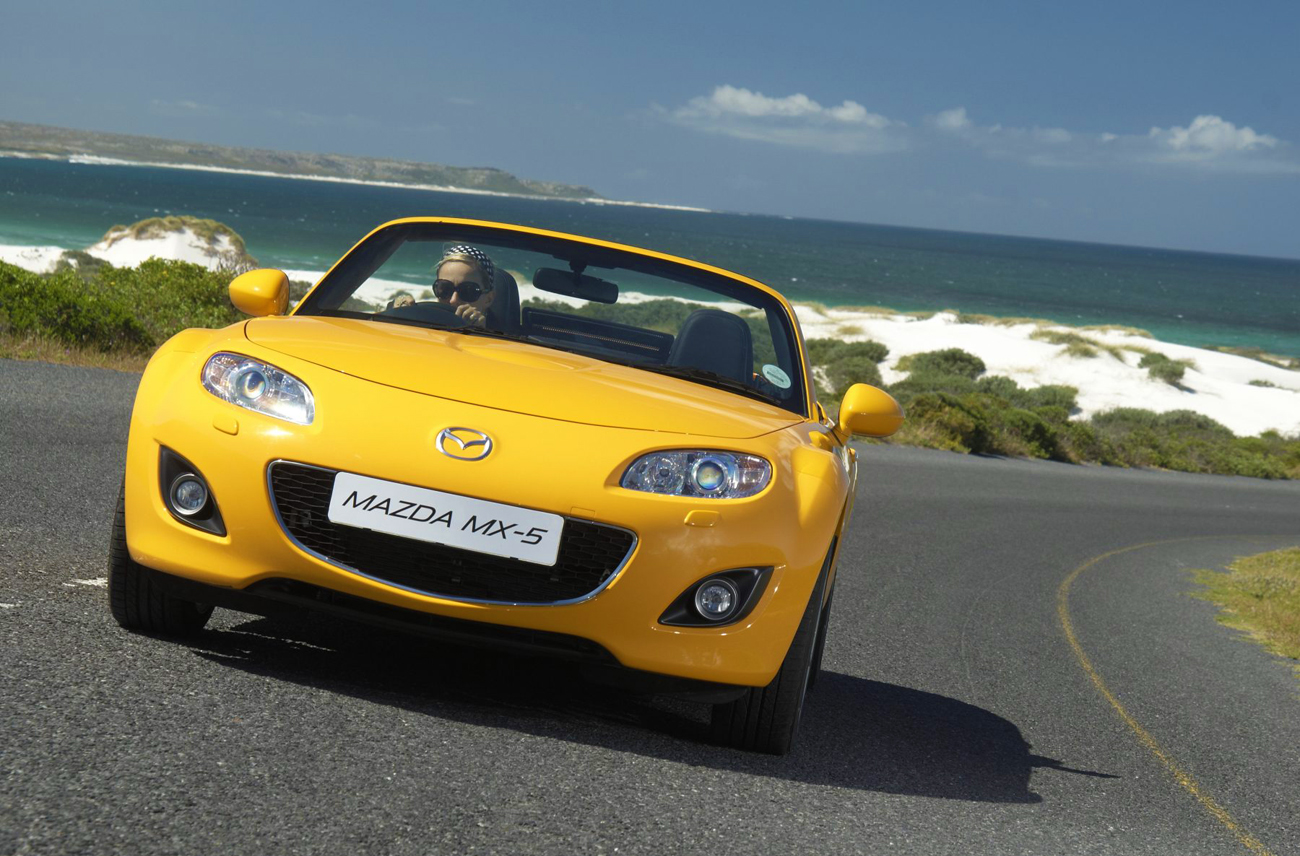 There’s a certain allure to the prospect of piloting a car without a roof down a twisty road: The slipstream buffeting your face, the exhaust note rudely ringing in your ears, the smell of hot metal and burning rubber confirming that you’re giving it stick. It’s the ultimate expression of freedom on four wheels.

Sports cars come in many flavours. For many, the exotics from Ferrari and Lamborghini count among the most desirable. Arguably more rewarding are the everyday, easy-to-drive supercars like the Audi R8 V10 and the Porsche 911 Turbo.

But for committed petrol heads, a real sports car has to be a roadster. And in the modern roadster context, the most enduring and most successful example of the genre hails not from Germany, Italy or England, but from Japan. It’s called the Mazda MX-5. The MX-5 turns 21 this year, which provides some indication of just how successful the two-seater has been. Since 1989, Mazda has produced and sold more than a million.

More importantly, it has been responsible for an ongoing roadster renaissance that has spawned a plethora of new generation drop-top rivals, including the BMW Z3 and its Z4 successor, the Porsche Boxster and the Audi TT Roadster.

However, none of those has remained as true to the original concept of an uncomplicated, unpretentious and lightweight two-seater sports car as has the MX-5. Inspired by the classic British roadsters of the 1950s and 1960s – the MGB, the Triumph Spitfire and the Austin Healey Sprite – the MX-5 links a relatively humble drivetrain and compact dimensions to an authentic wind-in-the-hair motoring experience and undiluted driving fun.

Released late last year, this latest MX-5 effectively remains a third-generation model, but has undergone a  facelift to reflect several cosmetic tweaks and embellishments, an updated cabin and a slightly more enthusiastic engine.

Perhaps the most obvious change is the extended front end, which is home to a larger, five-sided grille that’s meant to reinforce Mazda’s latest corporate “face”. It’s flanked by recessed, brightwork-garnished fog lamps.

Deeper sills and more pronounced wheel arches, as well as fussy detailing such as the chrome inserts on the door handles, create a look that’s more brazen than previous MX-5s  – and also more contrived. Another departure from the MX-5 norm is the fact that this latest model is offered as a tin-top only. Yes, the roof can still be folded away at the push of a button, but the canvas alternative is no longer an option in SA.

And that’s a pity, because the classic folding canvas roof has always been such an integral part of the MX-5 roadster recipe that the fold-away metal roof, as clever and convenient as it is, robs the car of some of its classic appeal.

Though the roof is undoubtedly clever. It stows away in a dedicated receptacle behind the seats, and doesn’t encroach on boot space at all. Which is just as well: at a shoebox-sized 150-litres, there isn’t much of a boot to start off with.

The interior is everything you’d expect of a roadster: snug, comfortable and well equipped. The heated sport seats are shaped for support, the small, fat-rimmed steering wheel looks and feels just right and the analogue instrument dials are clearly legible. Visibility is good from the superb, low-slung driving position, and the short, stubby gearlever clicks through the gates with positive precision. Climate control, electric windows and mirrors, a Bose audio system with six-disc CD changer and multifunction controls on the steering wheel are all standard, too.

Under the bonnet, the eager two-litre twin-cam engine hasn’t changed much, although it does rev higher than before. Mazda South Africa quotes a 118kW power maximum, and a torque peak of 188Nm.

But in Europe, the claimed output is 125kW and 190Nm when, as here, the power unit is accompanied by a six-speed manual gearbox, which is the only transmission on offer locally. We’re wondering why we have to be short-changed …

The engine revs freely to 7,000rpm and beyond, and it’s quite peaky, which encourages drivers to make full use of that slick-shifting gearbox. It sounds great too, especially with the roof stowed away. The result is a car that encourages the driver to explore its full performance potential at every opportunity.

Seated low, the sensation of speed is far greater than the speedometer suggests, while the sonic pleasures of the engine in full cry and the rush of the slipstream, add further appeal. The Mazda may not be a supercar, nor is it meant to be. That said, it’s certainly no slouch in performance terms.

The little roadster will race from rest to 100km/h in the mid 7-second bracket, and should manage a top speed just short of 215km/h. However, the straight-line dynamics are only one aspect of the Mazda’s talents.

More important is how closely the MX5 communicates with the driver. Piloting the two-seater is an utterly intuitive and enthralling experience. The car soon becomes an extension of the driver’s intentions, so that reactions to steering and throttle inputs are instant and unequivocal.

As a result, you always know exactly what the MX-5 is doing. The ride is surprisingly comfortable, but without getting in the way of the communication between car and driver. Turn-in is sharp and precise, and the grip levels are high. Very few cars are as much fun to tackle the twisties in than this Mazda!

No wonder the MX-5 is considered a modern-day sports car legend. Because it is light and nimble, with great steering and instant throttle response, it offers a thrilling, undiluted driving experience that is best savoured in a challenging mountain pass. That doesn’t mean that the Mazda feels dull or out-of-sorts during normal commuting, quite the opposite, in fact. Even the most mundane journey to the local mall is a thrill – to the extent that most owners will grab every opportunity to slip behind the wheel.

But the MX5 also offers more pragmatic benefits. For instance, it only sips fuel at a rate of 7,6-litres to 100km. And at 181grams a kilometre, the CO2 exhaust emissions rating is pretty impressive, too.

However. the real attraction of the Mazda MX-5 doesn’t rely on advanced systems or clever features. Instead, it’s the grin factor that counts for most: The smile that appears every time you get behind the wheel of the car, and that you battle to wipe off. This roadster spells fun with a capital F, and never lets you forget it.

Which leaves only the asking price to consider. While R344 250 is by no means cheap, the capability and dynamic appeal of the MX-5 makes every cent spent well worthwhile. Besides, such freedom on four wheels is priceless …