How Israel offered SA The Bomb (and, 35 years later, lost its ambiguity) 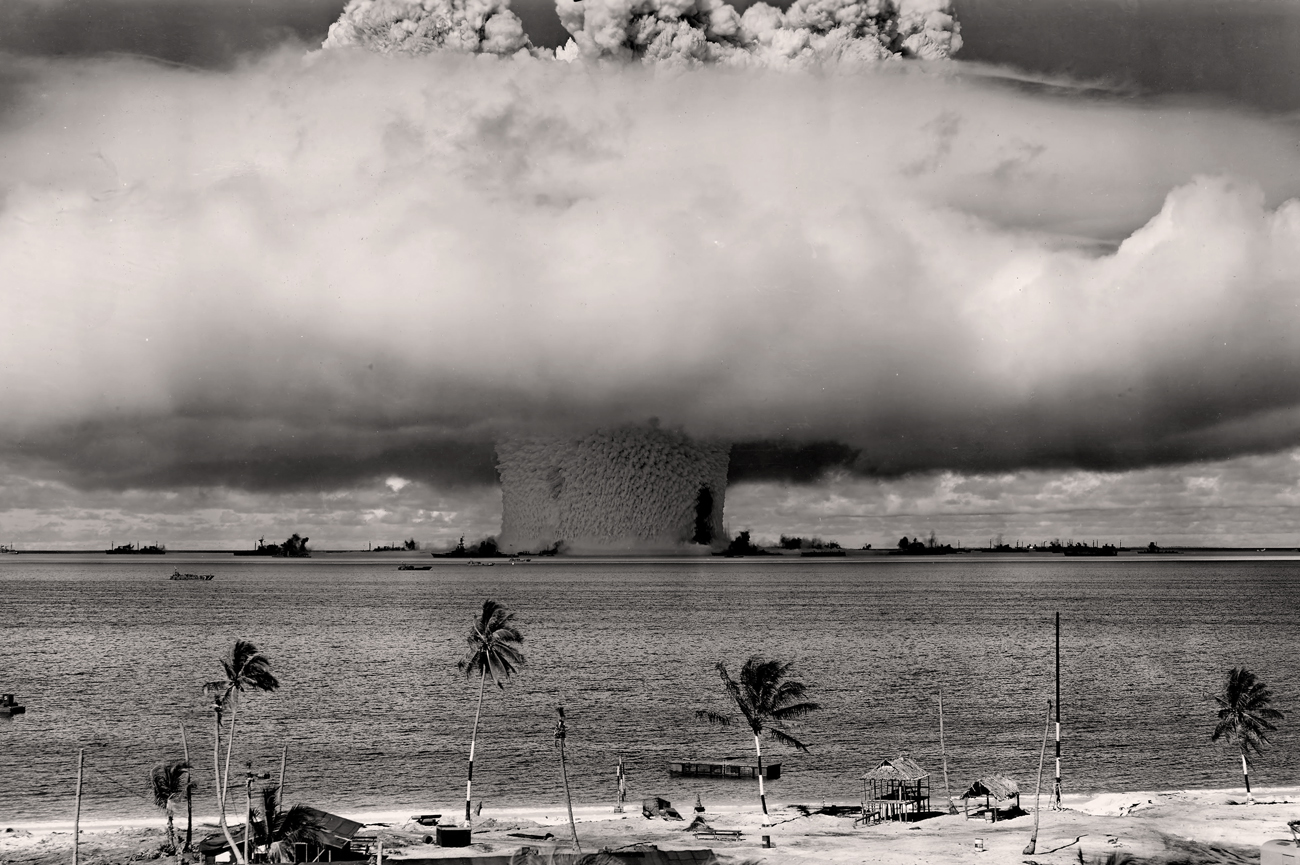 It's taken more than three decades, but the combination of a regime change in South Africa, a new book on SA-Israeli relations and some ancient sensor data has finally proven that Israel has nuclear weapons. And may have helped SA acquire its own, at a time when that was hardly responsible.

You may already know this movie. As the Israeli army appears about to be overwhelmed by the forces of the combined Arab armies, one Israeli nuclear-armed fighter jet soars aloft with a nuclear weapon, poised to attack an Arab capital if all else fails. The plane crashes, the bomb goes missing – and it turns up years later in the hands of – you guessed it – terrorists who then use its fissile materials to kill tens of thousands at an American football game and just miss killing the American president as well….whrrrrrrr…clackata clackata clackata….oops, sorry, wrong movie.

Or, how about a second one? It is the late 1970s and one of an early generation of “Vela” American military imaging satellites has detected the bright flash of light and radiation emitted from a telltale, “double burst” explosion over the far southern Atlantic Ocean. This so-called “double burst” or “double pulse” is almost always associated with nuclear explosions – first the triggering device detonates, and that drives the rest of the fissile material together into a critical mass that then explodes in a larger, full nuclear blast – just milliseconds later.

This would make a great spy flick too. At the time, speculation about responsibility for the nuclear test – if it was a test – fell immediately on South Africa and Israel, or on both nations working in tandem. At least publicly, this Vela anomaly has never been fully explained, at least not definitively. Whose nuclear test was it really? There are still some who argue it wasn’t; it was simply upper-atmosphere, very high-energy lighting and that the satellite was just not sensitive enough to make the crucial distinction between that and a nuclear test. Nobody has ever confessed to the Vela test. And, furthermore, if they happened to test devices, Israeli and South African nuclear tests took place at more secret locations in the desert.

Or, try out yet a third thriller, set out in a thoroughly researched academic-style book to be published this week. In sneak previews over the weekend, disclosures of previously-secret South African documents showed that the Israeli government offered to sell nuclear warheads to apartheid-era South Africa. This is the first actual documentation of Israel’s possession of nuclear weapons, in contrast to a decades-long official position in which Israel neither confirmed nor denied the existence of a nuclear arsenal.

This is according to Sash Polakow-Suransky’s research on the two nations’ military ties, revealed over the weekend in the Guardian and in his book, “The Unspoken Alliance” that comes out this week (and almost certainly will end up being a major motion picture starring Harrison Ford, Armin Mueller-Stahl, Matt Damon, Jennifer Garner, Ben Affleck, Brad Pitt, Angelina Jolie, Omar Sharif, Morgan Freeman, Terrence Howard, John Kani, James Earl Jones, Benjamin Bratt, Ken Takakura, George Takei and Tom Selleck). The book details top-secret minutes from 1975 meetings between South Africa’s defence head, PW Botha, and his Israeli equivalent, Shimon Peres, in which Botha asked for nuclear warheads and Peres offered them “in three sizes”. Small, medium and jumbo? Not quite. The three sizes apparently referred to conventional, biological and nuclear versions.

According to Polakow-Suransk, the two sides also signed an agreement on military ties, including a clause stipulating that even the existence of the agreement had to remain secret. (One of those “if we told you, then we’d have to kill you” deals.) On 31 March, 1975, the Israelis “formally offered to sell South Africa some of the nuclear-capable Jericho missiles in its arsenal”. South African military chief of staff Lieutenant General RF Armstrong then wrote a memorandum on the benefits to South Africa from the Jericho missiles – but only if they came in a nuclear-armed variety.

Although this memo had been leaked previously, it had not been linked directly to Israel until Polakow-Suransky did his research. Armstrong wrote at the time that “in considering the merits of a weapon system such as the one being offered, certain assumptions have been made: a) that the missiles will be armed with nuclear warheads manufactured in RSA (Republic of South Africa) or acquired elsewhere”.

But, back in 1975, South Africa was still a few years away from being able to build its very own atomic weapons and the proposed sale shortly thereafter acquired its very own codename, Chalet. PW Botha then expressed interest in the deal and Peres explained in more detail about the three menu choices, i.e., conventional, biological and nuclear weapons. Ultimately, however, South Africa did not go ahead with the deal because of the cost. Then, eventually, South Africa built its own nuclear bombs after 1979, possibly with Israeli assistance. But this partnership only came about as South Africa provided yellowcake uranium (partially concentrated uranium) that Israel needed to develop its weapons.

The details of this deal need to be seen in the context of the evolving relationship between the two nations. Prior to the 1973 Yom Kippur War, Israel was publicly critical of apartheid and had sought alliances with the various African nations that became independent throughout the 1960s. But, after 1973, as growing numbers of African nations started to see Israel as a form of colonialist power, the Israelis found themselves a new ally in Pretoria. By 1976, the relationship had changed so dramatically, that John Vorster (a man who had been accused of being a Nazi supporter at the beginning of World War II, after all) could visit Jerusalem and accompany Yitzhak Rabin and Shimon Peres to the city’s Holocaust memorial.

Polakow-Suransky explains that the relationship eventually grew so close that South Africa even relaxed the safeguards governing how yellowcake was used to prevent nuclear proliferation. In return, Israel sent South Africa 30 grams of tritium, the material that gives thermonuclear weapons a boost to their explosive power.

A few years ago, Shimon Peres, looking back over Israeli-South African ties during the apartheid era, commented: “Every decision is not between two perfect situations. Every choice is between two imperfect alternatives. At that time the movement of black South Africa was with (PLO leader Yasser) Arafat against us. Actually, we didn’t have much of a choice. But we never stopped denouncing apartheid. We never agreed with it.”

Polakow-Suransky’s revelations come at a particularly embarrassing time for Israel, just days before nuclear non-proliferation talks open in New York and where a key focus was scheduled to be Middle East issues such as Iran’s nuclear intentions. Moreover, this newly released information will almost certainly undercut Israel’s putative argument that even if it has nuclear weapons, unlike some places in its neighbourhood, it is a responsible nation that would not misuse them.

Reportedly, Israeli authorities tried to get South Africa to refuse to declassify the documents Polakow-Suransky was hunting. (Now, there is yet another film: How did they know Polakow-Suransky was trying to get this particular material?) Polakow-Suransky comments: “The Israeli defence ministry tried to block my access to the Secment agreement on the grounds it was sensitive material, especially the signature and the date,” but “The South Africans didn’t seem to care; they blacked out a few lines and handed it over to me. The ANC government is not so worried about protecting the dirty laundry of the apartheid regime’s old allies.”

The Polakow-Suransky book has also corroborated what Soviet spy and former South African naval commander, Dieter Gerhardt – jailed in 1983 – had said about the agreement between Israel and South Africa to arm Jericho missiles with “special warheads”. Gerhardt had said these were atomic bombs, but until Polakow-Suransky’s book, there has been no documentation of the proposed deal. Israel’s nuclear weapons in turn had been revealed by Mordechai Vanunu to the Sunday Times nearly a quarter of a century ago, although Israel has never confirmed Vanunu’s claims.