Soweto and Bulls love each other, but logistics bode ill for World Cup 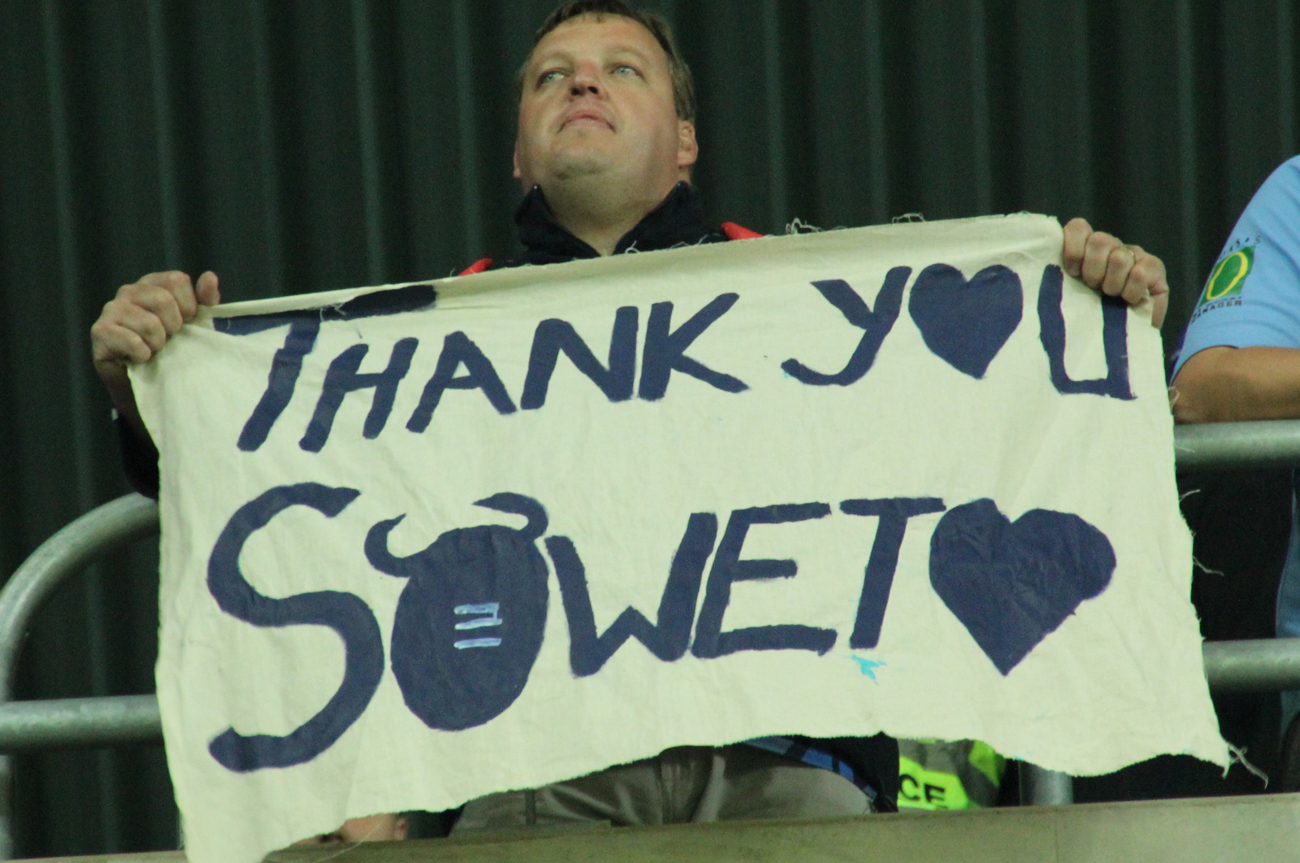 More than a few whities got a tour of a township for the first time in their lives on Saturday, and South Africa is perhaps just a little more united than it was before that. But God help us if we don't figure out how to get crowds to and from stadiums within the next couple of days.

It was a landmark occasion. Several thousand Blue Bulls supporters trekked to Soweto to watch their team demolish the Crusaders, which they did in an emphatic way, 39:24. That put them in high enough spirits that, after the game, the jokes about crime were somewhat less derogatory.

“Everyone take off your watches and put them in your back pockets,” a wag called out as the park-and-ride bus first entered Soweto, on its way to Orlando Stadium. But even that guy was impressed by the warm welcome the almost entirely white visitors, almost all of them from Pretoria, received. Locals cheered and waved as busses went past; some had even procured Bulls flags to wave. Some of the visitors were happy to admit it was their first trip to Soweto, and a handful even professed that they had never set foot inside any township. These were not among the fans who after the game ended up at the local shebeen, just across the road from the stadium, sharing beers with the residents, but even their idea of township life must have undergone a change.

But for all the goodwill it may have generated between white and black, the event raised all kinds of red flags about Johannesburg’s ability to move crowds from one place to another. If this was a test of World Cup readiness, then we’re in deep trouble.

Thousands of ticket holders reached the stadium only half-way through the game, and at least several hundred abandoned attempts to reach it entirely and simply turned back home. Highways were snarled for kilometres and roads were gridlocked, with some spectators travelling for more than five hours to make it from Pretoria to just outside Soccer City – on a Saturday afternoon. The area around Orlando Stadium was supposed to be a car-free zone, locked down in the same way that World Cup stadiums will be. That was not the case. Roads and lanes that were supposed to be reserved for busses weren’t; the pathetic handful of metro police on duty were insufficient to direct traffic right in front of the stadium, never mind denying access to cars for blocks around.

In a replay of the early parts of the Confederations Cup, park-and-ride busses from the Nasrec centre (with its copious parking) simply could not make their way through traffic to the venue in time. That made for bitter disappointment, given the amount of cunning, extrapolation, running and shoving required to make it onto such a bus in the first place. No marshals to direct the crowd, no signage and no designated stopping areas, just a bun-fight to get through the door of the first passing bus.

An important lesson supposedly learnt at the Confederations Cup was reinforced yet again: trying to charge for such point-to-point transport simply creates another, unnecessary bottleneck. Tickets for both parking at Nasrec and park-and-ride busses were on sale through Computicket before the match, but overwhelmed operators soon abandoned any pretence of trying to check tickets or take cash payments.

The chaos continued at the stadium itself. Security staff were overwhelmed by the swarm, and checks for weapons were rare enough that any number of explosive devices could easily have made it past. Ticket-checkers inside the building seemed entirely unfamiliar with its layout and could not direct (equally unfamiliar) visitors  to their seats, leading to further delays and confusion. In what may be a somewhat better omen for the World Cup, the crowd accepted the snarl and confusion with remarkably good humour. Even with the beer flowing and the clock ticking, lost tempers were ever rare and confined to verbal outbursts.

With any luck foreign visitors to the World Cup will be equally long-suffering, so they will report only bad organisation and planning rather than crushing and trampling injuries.