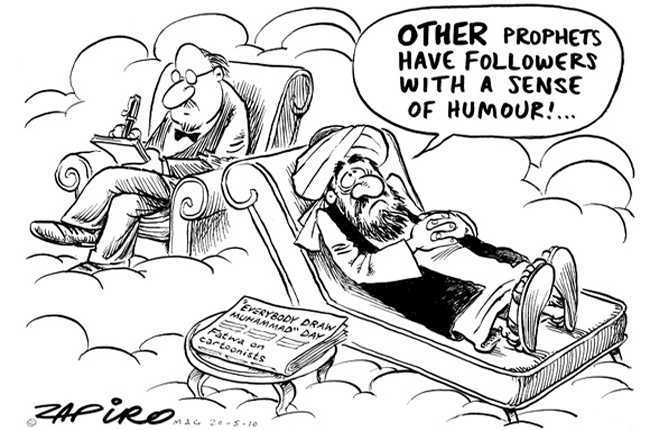 The Mail & Guardian beat an attempt to prevent it from going onto newsstands this Friday, on a technicality. But that didn't prevent the death threats.

A newspaper, death threats, a cartoon and the Prophet Muhammad. It could be Denmark in 2005, but it’s South Africa in 2010, and the newspaper isn’t Jyllands-Posten, but the Mail & Guardian. The cartoonist, of course, is Jonathan Shapiro, aka Zapiro.

The Mail & Guardian had a long night in court on Thursday, after Muslim council Jamiatul Ulama attempted to obtain an interdict to stop the distribution of Friday’s paper. They didn’t succeed, with the application being dismissed on a technicality. Judge Mayat (herself a Muslim) ruled that the interdict was not urgent, as copies of the paper had already been distributed, and the cartoon had been published online.

In April, US cartoonist Molly Norris published a cartoon making reference to May 20 being Everybody Draw Muhammad Day. This was in response to the fact that Comedy Central had cancelled a rebroadcast of a South Park episode, owing to its controversial depiction of the Prophet Muhammad. A separate page on Facebook (now removed) was started, encouraging artists to submit their drawings of Muhammad. The event has garnered international attention; Pakistan has blocked several websites, including Facebook and YouTube, owing to “sacrilegious” content.

Locally, Mail & Guardian editor-in-chief Nic Dawes has admitted to receiving a few “unpleasant phone calls”, including death threats, and has spent the day dealing with the reaction, and speaking to local Muslim leaders and radio stations. He is at pains to emphasise the fact that he doesn’t think the threats represent the views of the broader Muslim community. “I think all the talk of violence is frankly overblown,” he says.

Dawes says he knew people would be upset by the cartoon, although he hadn’t expected such a robust response, or to be taken to court. But he stands firmly behind its publication. “I regret that it causes people pain and offence, but I have to weigh that regret against our commitment to freedom of speech, and the equality of our treatment of all religions,” he says. He points out that he has not censored cartoons in the past that may have offended Catholic or Jewish readers.

And not all Muslim reaction has been negative. “The people who feel put out by this are probably the same people who cheer Zapiro on for some of his depictions of America and Israel,” says Shehnaz Cassim. (And yes, she is Muslim). “I think the cartoon is apt, and makes a fair point.”

Dawes hopes that the response to the cartoon is something that South Africans will deal in terms of a conversation, rather than a fight. “South Africans are good at conversations,” he says. We hope he’s right, and that the “Fatwa on cartoonists” Zapiro depicts doesn’t become a reality for him.

Read more: Nic Dawes on Twitter, Mail & Guardian and IOL (We would’ve included a link to the South Park episode, but Comedy Central has removed it from the website.)