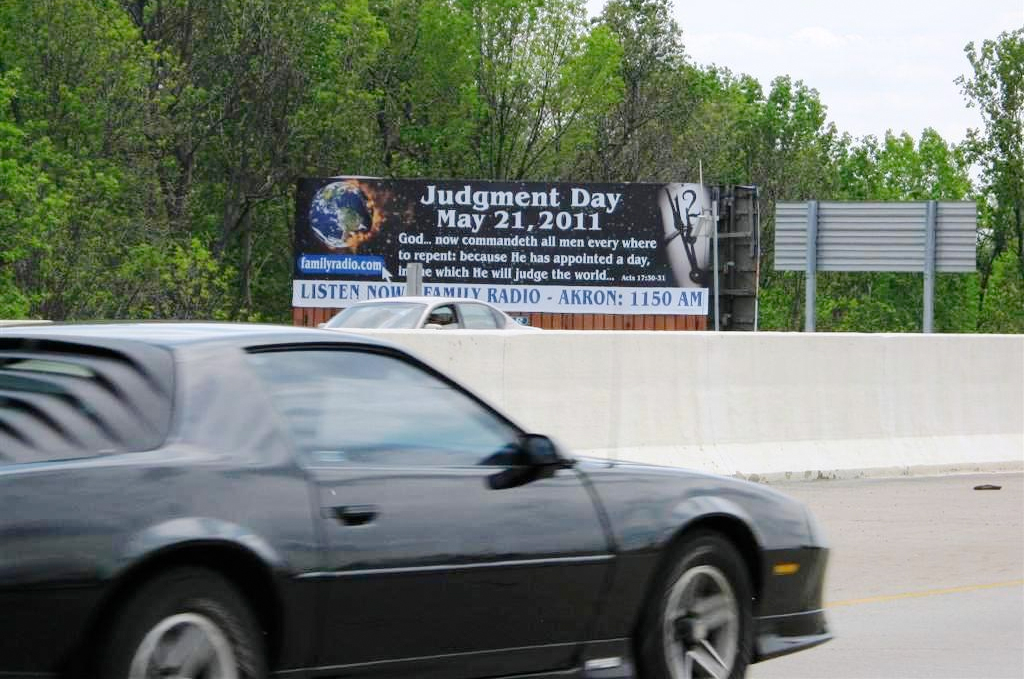 According to the calculations of Harold Camping, a US-based octogenarian, the world will end on May 21st, 2011. Camping has been wrong about this once before, but on his second go he’s got a global community of believers following him, from California to Japan to Ghana. What have they got planned for the one-year-to-go party?

In terms of comments, if not exactly re-tweets, The Daily Maverick’s articles about the global sect that believes May 21st 2011 is the End of the World have been amongst our most popular yet. The first piece was published on January 5 this year, under the header “Only 501 shopping days to Armageddon,” and in it we suggested in a regrettably sardonic tone that church leader Harold Camping’s methods for calculating the date of The Rapture – a method based on numerology and certain biblical themes – might not be entirely foolproof.

As regrettably, we also pointed out in the article that although Camping had been wrong about the date of Christ’s return before, this previous error had no palpable effect on his standing. “On September 6th 1994,” we wrote, “a group of [Camping’s] followers dressed up for the Sabbath and filed expectantly into a war veterans’ building in Alameda, California. They prayed and held their open bibles to the skies, but nothing happened. Fifteen years later, the explanation of their leader that he simply got his sums mixed up is generally accepted.” The next day we (there’s no real “we” here, of course, it’s only just me, but editors sometimes need to share in the blame) received an email from a certain Michael Cook (who appeared to have a US-based email address) with the subject line: “2011 Warning in Pictures”. The body of the email contained around a dozen pictures of cars, trucks and billboards, and what they all had in common was their message – for believers, The Rapture is approaching, for non-believers, the End Days are nigh: May 21st 2011, your choice.

So on January 6 we published the pictures, and the sight of these everyday objects advertising the imminent apocalypse seemed to make an impact on our readers, because the story was still drawing comments some three-and-a-half months later. Two genres of opinion developed: those that fervently believed things would be different on May 21st next year, and those that did not. Of the former genre, scripture tended to be quoted a lot as proof. Needless to say, an editorial decision was made to publish a third story, this time with more context and an interview with a believer. What The Daily Maverick found was that while there was no way to tell how many people worldwide followed Camping’s teachings, they were nonetheless broadcast in 48 languages to every continent on Earth. At the time of our enquiry, Family Radio, the official multinational media group that carries the Camping message, was looking for people to expand its broadcast range into not only Arabic, Armenian, Creole and Khmer, but Sindebele, Northern Sotho, Sesotho, Shona, SiSwati, Tswana, Xhosa and Zulu too.

Back in January, Afrikaans was already a language of Family Radio, and we managed to speak to Johann Coetzee, a believer based in Nelspruit, who said: “At first I thought it was a false prophecy, but checking it myself, I started to realise there’s a lot of information in the Bible referring to time and judgment.” It is now May 21st2010, one year before The Rapture, and as we suspected the sect has expanded. Judgment Day billboards have gone up in Cameroon, Ghana, Nigeria and Jamaica, a missionary trip has returned from Japan, and the “May 21, 2011 Judgment Day!” tract has been translated into Hmong and Italian.

As for the one-year-to-go-before-it’s-all-over celebrations, the sect doesn’t seem to have much planned in the way of fireworks or live concerts. It does invite you, however, to join the Yahoo discussion group entitled “Discerning Time & Judgment: May 21, 2011”. “This group’s purpose,” says the invitation, “is to share information from the Bible, which the Lord is unsealing at this time of the end, with individuals from around the world who, perhaps, have never heard the truths of the Bible. One of the big reasons for starting this particular group will be to discuss the events that the Bible declares will unfold on May 21, 2011, such as the resurrection of the dead, the rapture of all true believers, and the closing of the door of salvation to this world.”

Here’s one way to look at it: if the believers who’ve commented on our previous articles seems like people you’d like to spend all eternity with, then you won’t lose much by repenting for a year; if they don’t, then carry on as is.