63rd Cannes: Applause, emotion and Life Above All

63rd Cannes: Applause, emotion and Life Above All 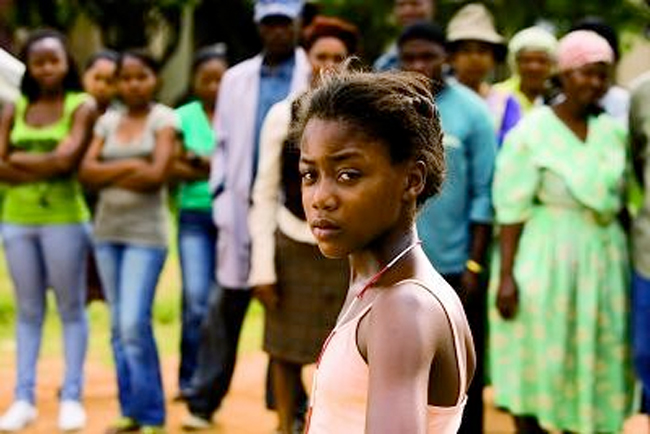 Local film Life Above All had its world premier in Cannes on Tuesday. And the world, okay, the audience at the screening, was truly, fully, hey shoo wowed. Yet again, South African filmmakers have punched above their weight in bringing us this story of a small girl with a big heart.

It’s still 10 months until Oscars season, but we’re picking our foreign film winner early. South Africa’s only official selection at the festival this year has won the hearts of the audience and critics alike. At the end of the film’s screening, the audience stood and clapped solidly for 10 minutes, and then began taking pictures of the three lead actresses, Lerato Mvelase, Khomotso Manyaka and Harriet Manamela, director Oliver Schmitz, co-producer Greig Buckle and screenwriter Dennis Foon, who were all in the audience.

Life Above All tells the story of 12-year-old Chanda, who speaks out when others around her are telling lies and keeping secrets. It all begins when her baby brother dies suddenly and the community of Elandsdoorn begins to suspect this is because her mother has HIV. She goes on a journey to restore her mother’s dignity and overpower the gossip and lies of those who don’t know any better.

The film is a touching look at how a young girl can inspire the people around her. Chanda’s mother has HIV/Aids, but that’s not the focus of the story. It’s about how courage and strength can overcome adversity. It’s beautifully shot and well acted with Manyake giving an incredible performance.

As Manyake left the theatre, there was a lot of crowding around the 13-year-old first-time actress, who is from Elandsdoorn and has never experienced anything like this. The young star kept repeating over and over: “This is good, very good!” Audience members lavished all the films three main actresses with praise, saying things like, “superb”, “beautiful”, and “wonderful performances”.

Schmitz exclaimed afterwards: “I was very nervous. Every time someone coughs, you think something’s wrong; every time someone gets up, you think there’s something wrong. But the reaction was amazing. I looked around to see everyone around me with tears in their eyes. And then they were clapping for the actresses sitting next to me, and rightly so. They are so deserving of that praise.”

Schmitz is the same man who brought Mapantsula to Cannes in 1988 when it was selected for Un Certain Regard back then, certainly one of the first big occasions for an SA film at the festival. His latest film is screening at Cannes this year in the same official selection category, which is known in English as the World Cinema Showcase.

Walking out of the cinema, I met renowned movie critic Roger Ebert, who, as he is unable to speak, gestured his positive feelings towards the film with two thumbs up. He later blogged that the film is “the best heart-warmer” and a “tear-jerker”, saying that the term “tear-jerker” is used “as a compliment, because this is a hardened crowd and when you hear snuffling in the dark you know it has been honestly earned”.

The response towards the film so far has certainly made up for the lack of attention the filmmakers and actresses received at the South African party this past Saturday. It’s something that upsets Schmitz and Buckle alike, who feel that such a fuss was made over Jennifer Hudson and Terrence Howard being in Cannes to promote the Winnie movie. (And by none other than the National Film and Video Foundation and the Minister of Arts and Culture, Lulu Xingwana.) In speeches given that night, Life Above All wasn’t mentioned – at all. Perhaps now the spotlight will shift a little to a film that’s truly taking the festival by storm.

Just in case you haven’t realised what a big deal that 10-minute standing ovation was, it’s worth a reminder that Cannes audiences are notoriously vocal about their feelings. This phenomenon was aptly captured in an episode of Entourage where lead character Vince’s dream project gets booed at its Cannes premiere, sending him into a depressive spiral.

Last year when director Lars von Trier brought his graphically-violent Antichrist to the fest, a smattering of applause at the end was drowned out by booing and jeering, reflecting the general consensus that the film was deliberately over-the-top and provocative. Four years ago, audiences watching Sofia Coppola’s Marie Antoinette with Kirsten Dunst in the lead role, let the director know just how they felt about her portrayal of the French queen by their booing.

Stony silence, too, is an indication of how the audience feels – which is what the opening night screening of Ron Howard’s Da Vinci Code got in 2006. But for the most part, one can tell a lot about the popularity of a film by the length of the ovation it’s given. As one LA Times journalist puts it: “It’s approval ratings by way of the stopwatch.”

Life Above All has passed this first test with flying colours. Now the team behind the film can sit back, relax, and look forward to racking up official recognition and awards over the coming year. We wish them all the best.

(Neophytou is an Eyewitness News reporter)