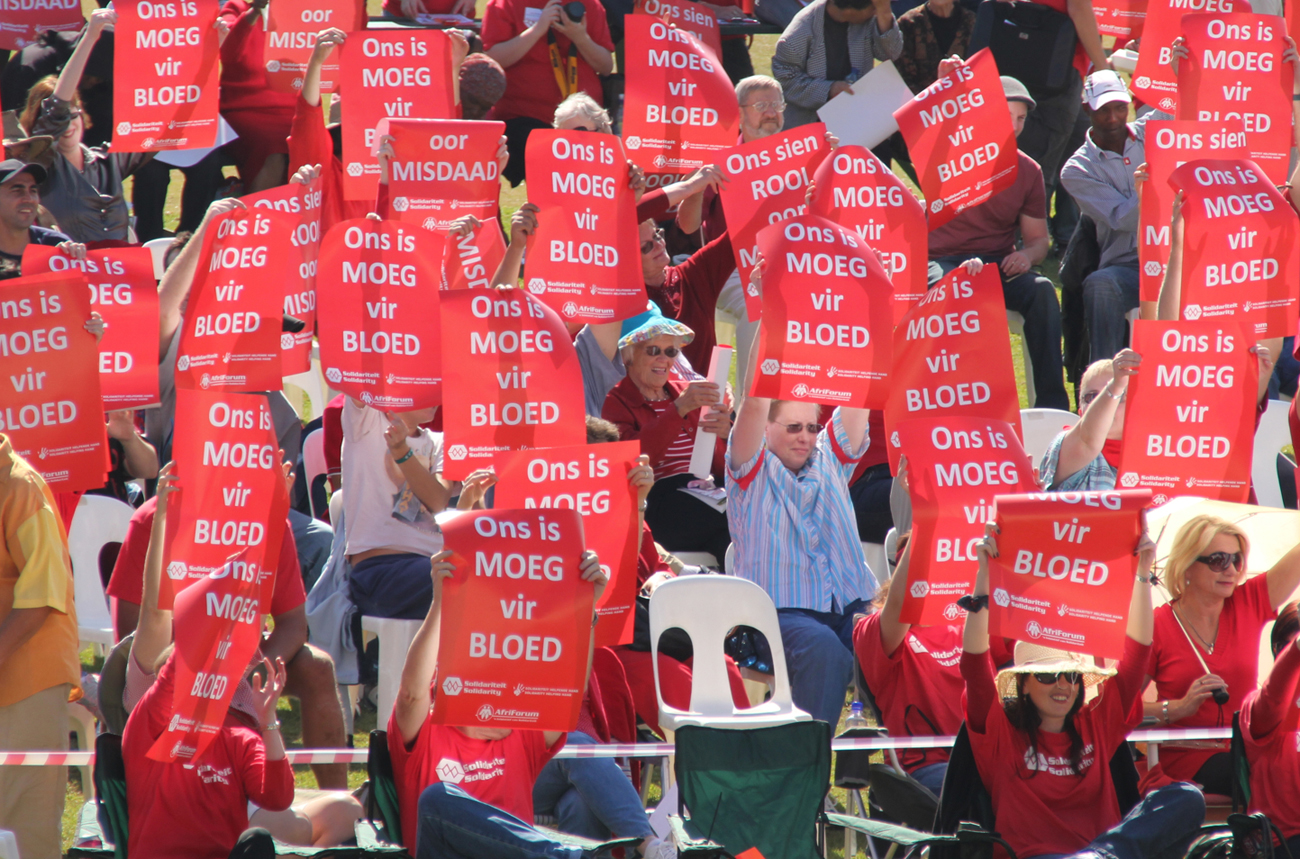 You have to give it to white South Africans: they just don't know how to throw a decent protest. On Wednesday Afrikaans community group Solidarity Movement held a huge, co-ordinated anti-crime event. It would have been more accurately described as a prayer meeting with music. Not to mention that it targeted the wrong people.

The last time Solidarity tried to hold a major protest, things nearly got physical with the cops, but only after it called off a march because the intended target, Julius Malema, had asked them to.

As more than one speaker at Wednesday’s flagship event in Pretoria remarked, Afrikaners may be organised, but they suck at making their voices heard. Give them credit for realising that they have to try, through. As singer Sunette Bridges told the crowd, in the new South Africa you can’t go about your business quietly and then not expect to be ignored. Solidarity says its memorandum of demands (which boils down to more and better policing) was handed over to hundreds of police stations by hundreds of communities today. That depends how you count; in Pretoria the single meeting split up to deliver the list of demands to 27 different police stations, with each of these counted as a community.

Then there is the matter of making demands like “lift the moratorium on the appointment of reservists” of individual police stations. Aside from some calls on businesses to contribute their fair share to anti-crime initiatives, all of the demands are purely political and can be implemented only by the national government. And while a memorandum was handed to the government, that was not part of the public activities but treated as somewhat of an afterthought. Getting the attention of government was not on the agenda. A sedate crowd plunked themselves down on chairs, listened to performances by several artists backed up by a CD player, bowed their heads in prayer, and wandered off to procure a boerewors roll or two from the mandatory stall. No dancing. No chanting. Nothing that the ANC or its government deployees would recognise as a protest.

For all its failings, however, the event served to show the depth of feeling of the mostly white, mostly Afrikaans-speaking participants. From the speeches from artists and victims, the laying of flowers, and the occasional but vigorous waving of placards, it was abundantly clear that at least the several hundred attendees in Pretoria feel themselves under siege in their own homes.

And that was the message the event sent out into the world. Several teams from foreign broadcasters and newspapers were on hand to capture the speeches and dramatic gestures; there was little else of relevance for the World Cup advance troops to cover on the day. The part that will (or at least should) grab the attention of government, we fancy, is one official demand that is lost in the middle of a laundry list: “Make private expenses incurred for crime prevention tax-deductible.”

Doing that would have a potentially ruinous impact on the Treasury, of course, given that South Africans annually spend billions on services and hardware that could be considered as crime-preventative. But precedent created at local government level, where municipalities have failed to deliver essential services, shows that there is enough leeway for taxpayers to – just maybe – withhold taxes unilaterally, and get away with it.

Now that would be a protest.