Transport, communications workers rub grievances together, get a little love 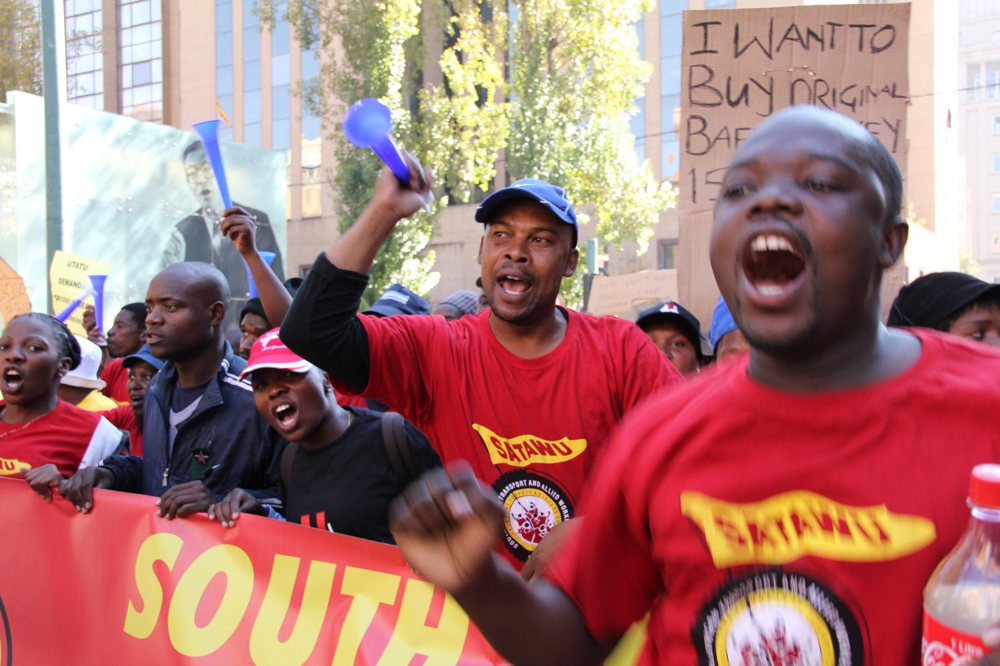 What's the worst thing you can do as a politician, or as an employer, when workers are toyi-toying in front of your offices? Sit in your office and refuse to give them the time of day, probably. Which makes Transnet CEO Chris Wells a lot smarter than Gauteng premier Nomvula Mokonyane.

Give Vodacom half a point, for at least sending out a representative to receive a memorandum of grievances (in its case, mostly about the use of contract workers by way of labour brokers). But in the minds of several thousand workers who protested in the Johannesburg CBD on Friday, it was Transnet that won hearts and minds, and the Gauteng provincial government that bought itself enemies. The majority of the crowd were striking Transnet workers, from unions Satawu and Utatu. But they were also joined by the Communications Workers Union, which is pushing the current big bugbear of umbrella body Cosatu: labour brokers.

Transnet workers are visibly more interested in a 15% pay rise than in making sure their labour-broker employed brethren are permanently employed, with full benefits. But the issues have become conflated, and depending on the appetite of workers to continue going without pay, Cosatu may turn this strike into a test case, to see just how serious the ANC administration is about ousting labour brokers, at least from parastatals. Maybe that’s why Mokonyane failed to show her face; organisers claim she had promised to be available to receive their memorandum. Instead, she sent provincial ministers Barbara Creecy and Ignatius Jacobs as representatives. Which backfired on all three when the organisers refused to hand their documents to either, and promised to come back another day to finish the job.

Later arriving at Transnet’s offices in Braamfontein, nearly the same scenario played itself out again. Workers called for human resources chief Pradeed Maharaj to accept their memorandum. Or, just to make a point, for CEO Chris Wells to come out and face his workers. It took a while, but eventually a flying phalanx of police accompanied Wells out of the offices, through the gate, and right up onto the speaker truck that served as center point of the protest. Wells didn’t have a lot to say, but then he didn’t have to. A few individuals in the crowd hurled abuse his way, but most of the workers seemed to actually appreciate his positive message. “I look forward to when we can get back to work,” he told them. Which sounds a lot more promising than what union leaders had to say: if we don’t see our demands met by Monday, prepare for secondary and sympathy strikes that will bring the economy to its knees.