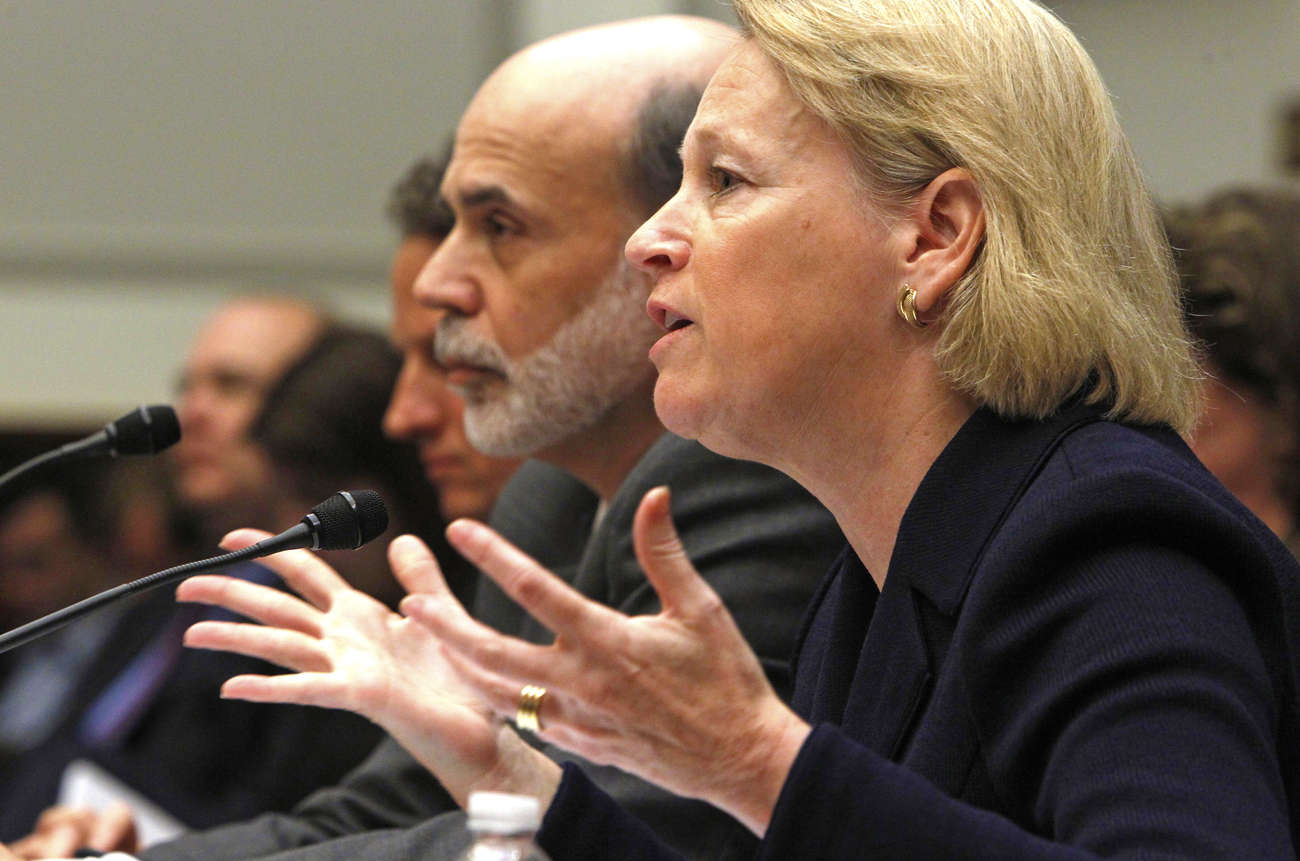 It was the day that almost crashed the US markets. On 6 May, the Dow Jones industrial average suffered a sudden nerve-wracking drop of nearly 1,000 points, followed by an equally quick, and just as mysterious, correction of 700 points. One week later, the industry's best brains and the government still feel they are stumbling around in the dark room filled with rusty nails and broken glass.

Earlier this week, US Securities and Exchange Commission chairperson Mary Schapiro – in testimony to a congressional panel probing these wild gyrations – virtually threw up her metaphorical hands, saying, “at this point, we are unable to point to a single event which could be the sole cause.” The markets failed investors, rather than being the victim of some the widely publicised, early theories on the fundamental cause or causes of the sudden panic, including the so-called, erroneous “fat finger” trade that seemed to have set it off; shadowy computer hacking or terrorist activity; unusually large trading in Procter & Gamble shares (one of the stocks included in the Dow Jones industrial average); or suspicious trading in derivatives.

Democratic Congressman Paul Kanjorski, the subcommittee chairman, said he had convened the hearing because “we cannot allow technological problems, regulatory loopholes or human blunders to spark the markets and cause panic.”

Even before Kanjorski’s subcommittee had met, over the weekend, the Senate’s Banking Committee chair, Chris Dodd, said that federal regulators must address the “casino environment” on Wall Street where computerised high-frequency trading can trigger market-shaking turmoil. For Dodd at least, it could well have been the wiles of the computers in buying and selling stock in nanoseconds as a possible cause of last Thursday’s meltdown. And in an unusual show of bipartisanship, Dodd’s Republican counterpart, Richard Shelby of Alabama, agreed that something must be done: “You’ve got a high risk in the market place that something could go wrong and once it really goes wrong it could be catastrophic.” Dodd’s committee is now considering new financial regulation law and this most recent set of events is sure to give impetus to its efforts.

Without laying the blame fully at their doors, Schapiro, during her Tuesday testimony, pointed her finger at the role of some big Wall Street firms in last week’s stock plunge, saying those firms had pulled back from the market on Thursday at the very moment it was crucial that they stayed in the game to support normal trading.

In essence, Schapiro was arguing that it was Wall Street’s corporate ethos that may have been the “most significant” factor in generating the stock market’s dramatic – and frightening – volatility. As she explained, the sudden withdrawal from the market by firms that usually play the role of “liquidity providers”, via their purchases of stocks when prices are declining and selling stocks when prices are rising, may have had a tangible impact on the way things worked out. In accord with securities law, some firms, such as those associated with a major bank or brokerage are required to stay active in the market – even when there is real market stress. But, sort of under the radar, many of these more established liquidity providers have been elbowed aside over the past 10 years by new, high-speed electronic trading firms with no current legal obligation to provide this cushioning liquidity.

Thus, in Schapiro’s view, at least this time around, there were no evil gnomes from Swiss banks; there was no nefarious plot to inject a virus into America’s stock-trading software; no evil plan hatched by Ming the Merciless, Flash Gordon’s old nemesis; no cabal by the Bass Brothers or George Soros to corner one of the commodities markets. Shucks; there doesn’t seem to be a financial thriller of a movie in this.

While Schapiro didn’t list the culprits of this retreat from liquidity provision, it is true that firms like Citadel Securities, Barclays Capital and Merrill Lynch are part of financial conglomerates that have traditionally filled this liquidity function; but lesser-known, newer firms like Getco and Jump Trading focus exclusively on electronic trading and don’t do the liquidity thing. However, according to Schapiro, the usual liquidity providers stopped buying stocks that had suffered those large price declines on Thursday “whether because of an intentional decision to withdraw or because of specific market practices”. No one is charging violation of rules – yet.

To try to get to the bottom of this complicated, confusing movement in stock prices, federal regulators have been examining millions of trades (perhaps they’re in competition with senate investigators who have been reading every Goldman Sachs email since the beginning of time) but those SEC investigators have not yet pinpointed the real, fundamental, basic, central, original cause behind all that volatility last week.

At the same hearing as Schapiro, but offering a slightly different perspective, Gary Gensler, the head of the Commodity Futures Trading Commission, told the congressional hearing that during that crucial time period of the big drop on the NYSE, one futures trader, whom Gensler declined to name, accounted for about 9% of all trading volume in the country’s most actively traded stock index derivative contract, known as the 500 e-mini futures contract.

All of this trader’s orders were to sell, while most of the other 250 traders operating in the same market on Thursday were both buying and selling securities. Not surprisingly, as this mysterious trader’s orders were processed, the futures index on the Chicago Mercantile Exchange began to plummet. Gensler said his regulators were continuing to search for the causes of the brief panic and he expected they would find other trades that might have contributed to the plunge as well. However, by calling attention to the trade in the e-mini futures contract, regulators seem to be saying that trading activity is critical to an understanding of the full sequence of events that consumed over 600 points from the Dow Jones industrial average in just minutes last Thursday.

Then, as the markets began their plunge, regulators argue still more factors came into play, further accelerating the fall, including the absence of circuit breakers on several of the newer electronic exchanges – even though the New York Stock Exchange’s trade-halting circuit breakers did their thing. It sounds like boom times for stock market regulators who understand and can explain (or apply) chaos theory and catastrophe theory. (And so, Friday’s homework: the class will read and be prepared to discuss Ray Bradbury’s tale of the Cretaceous-era dead bug that changes history in The Sound of Thunder.)

Schapiro, in her prepared testimony, also pointed a more tentative index finger at the different rules that apply to the various trading exchanges for when they slow or stop trading in a fast-declining stock (older investors may remember that these holds were instituted in response to some earlier wild rides on the stock exchanges). By the time she was testifying, Schapiro had already told the various US stock exchanges they had 24 hours to sort out a national, market-wide plan for mechanisms to stop or slow trading in stocks that start falling rapidly. By Tuesday, the SEC said it had already received these recommendations – but declined to publicise what they were precisely, although the SEC did say: “As a first step, the parties agreed on a structural framework, to be refined over the next day, for strengthening circuit breakers and handling erroneous trades.”

As the system is set up currently, trading in stocks, options and stock index futures contracts comes to a halt for an hour if the Dow falls by 10% before 14:00 Eastern Standard Time, or for 30 minutes if it should fall by that amount between 14:00 and 14:30. After that, there is no halt unless the market falls by a whopping 20%, in which case it closes for the rest of the day (and for the rest of the year as well?). Also, if the Dow should fall by 20% before 13:00, trading comes to a screeching halt for two hours, or one hour if the 20% drop takes place between 13:00 and 14:00. After 14:00, a 20% decline closes the market for the rest of the day. And if the Dow falls by 30%, all trading is halted for the remainder of the day. Trading normally ends at 16:00.

Schapiro said that, for her part, her SEC is going to look really, really carefully at those existing “timeout” mechanisms that carry out a pause in the market as a whole or with specific stocks during times of enormous volatility or distress. Shapiro added that because of all the trading automation, there might be a need for further timeout mechanisms, and for limits on the prices of trades and limitations on the sizes of individual market orders. Ultimately, she said, the SEC would be considering if short-term trading strategies that use computer analysis to make split-second decisions need to be curtailed. Okay, so it was that “ghost in the machine” that caused all the fun after all.

Finally, the SEC and Commodity Futures Trading Commission (that other 900 pound gorilla in the regulation of stock trading) announced a joint task force to discuss new regulatory issues and that it would start with Thursday’s ruckus. Going forward, its key responsibility would be to suss out regulatory loopholes or gaps in-between what the two bodies already cover. It would be difficult to overestimate the importance of their task.