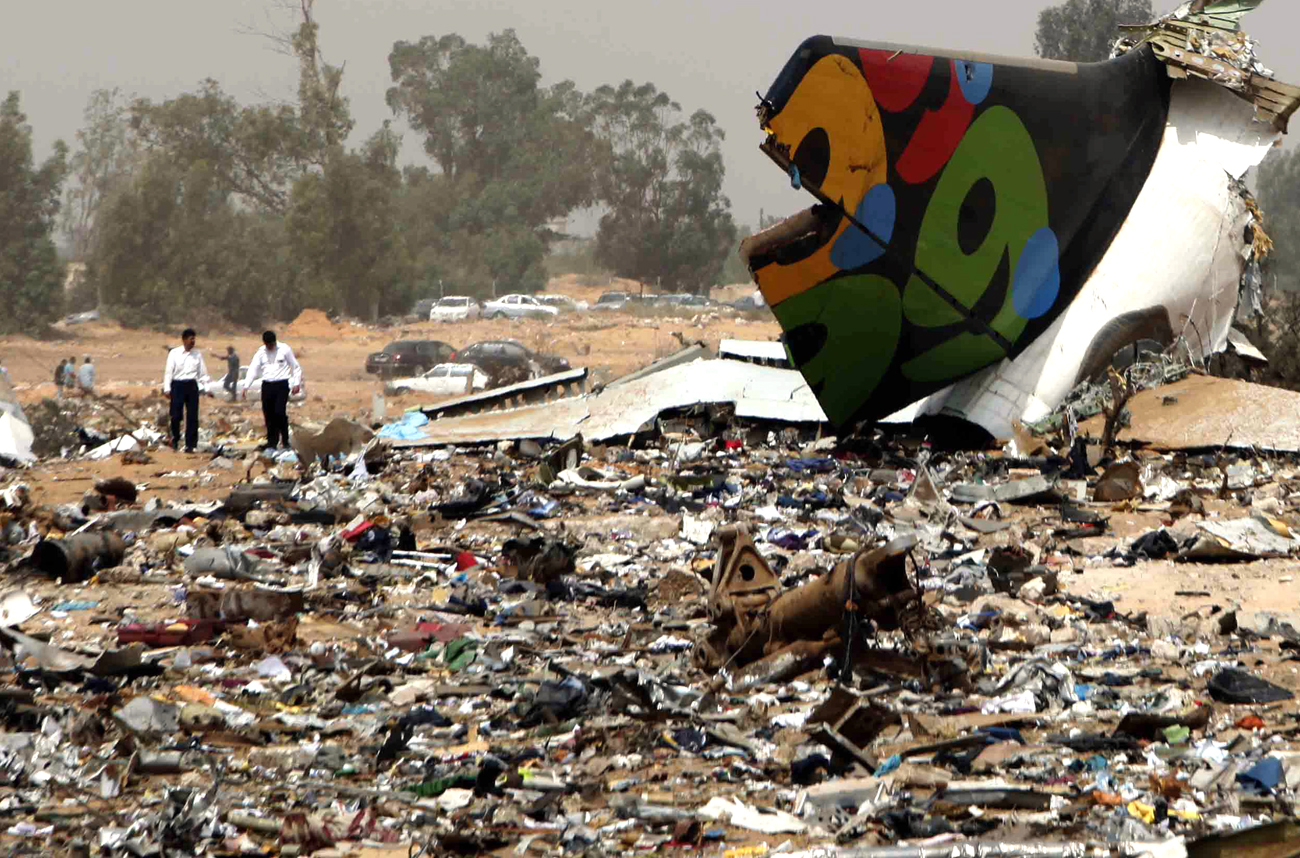 A 10-year-old Dutch boy is the lone “miracle” survivor of a plane crash in the Libyan capital Tripoli that killed 103 people, most of whom were Dutch tourists returning from vacation in South Africa. The child has undergone surgery for multiple fractures in both legs, but doctors said he was out of danger. The Libyan Afriqiyah Airways Airbus crashed minutes before landing after a more than seven-hour flight from Johannesburg, with debris scattering over a wide area. Sixty-one victims were Dutch, many of them families headed home after spending their spring break in South Africa. Some 10 South Africans are reported to have died in the crash. Lone survivors are rare. Last year a young girl was found clinging to wreckage 13 hours after a plane went down in the water off the Comoros Islands.

Photo: Rescue workers examine debris from Afriqiyah Airways flight 8U771 at Tripoli airport May 12, 2010. The Libyan Airbus crashed as it tried to land at Tripoli airport early on Wednesday, killing 103 passengers and crew aboard, but a Dutch boy survived, officials said. REUTERS/Ismail Zitouny

Obama says things to get worse in Afghanistan before they improve

US President Barack Obama says the war in Afghanistan will get worse before it gets better, but declared that the withdrawal of US forces next year remains on track, according to AP. Afghan President Hamid Karzai, on a visit to Washington, joined Obama at a White House news conference as US-led forces ready themselves for an assault on Kandahar province, the home of the Taliban. The campaign is expected to be among the bloodiest of the eight-year war. While Karzai has been warmly welcomed in the US, there have been months of politicking over the conduct of the war, most seriously concerning civilian deaths from US operations, and fraud allegations surrounding Karzai’s re-election last year. Both parties have played down the ill feeling, claiming that frank discussions are par for course among friends.

The leaders of Britain’s coalition government stood side by side promising to act together to promote economic stability, engage in political reform and demonstrate that their government is more than a marriage of necessity. Conservative Party Prime Minister David Cameron, and his Liberal Democrat deputy Nick Clegg, pledged both parties would tackle the UK’s bloated deficit – running at nearly 13% of gross domestic product, or some $266 billion – by cutting some $9 billion from the budget this year. The parties were forced into coalition when the Conservatives failed to achieve a parliamentary majority in the May 6 election. Five Lib Dems, including Clegg are in the Cabinet, and Cameron is set to announce a string of junior government posts that include more Lib Dems. May the force be with them.

New York attorney-general Andrew Cuomo is looking into eight banks to determine whether they provided misleading information to ratings agencies Standard & Poor’s, Fitch Ratings and Moody’s Investors Service in order to inflate the grades of various mortgage securities. Number one on Cuomo’s hit list is Goldman Sachs, followed by Morgan Stanley, UBS, Citigroup, Credit Suisse, Deutsche Bank, Crédit Agricole and Merrill Lynch, now owned by Bank of America. Goldman’s top executives have already been squirming under the spotlight in Washington, as Senate hearings sought to confirm allegations they bet against securities that they sold to clients. Cuomo’s investigation goes beyond focusing on interactions between the banks and their clients who bought mortgage securities, and includes probing the interrelationship between banks and the agencies that rate their products. The ratings agencies themselves have been accused of overstating the quality of many mortgage securities that ended up losing money once the US housing market collapsed in late 2008.

Dragan Vasiljkovic, a fugitive former Serbian paramilitary leader suspected of war crimes has been rearrested in Australia, after Australian courts turned down an extradition request from Croatia last year and then overturned the ruling. New information from authorities in the Netherlands led to Australian Federal police to recapture the Australian citizen in New South Wales after a worldwide search. He’s wanted for allegedly committing atrocities in Croatia during the 1991 to 1995 war that saw the former Yugoslavia fall to pieces. Vasiljkovic denies committing war crimes, but admitted to training Serb recruits, having killed people in combat and to interrogating enemy troops. Croatian authorities say he helped torture and murder civilians and prisoners of war. The Aussies will make a decision on Vasiljkovic’s extradition soon.