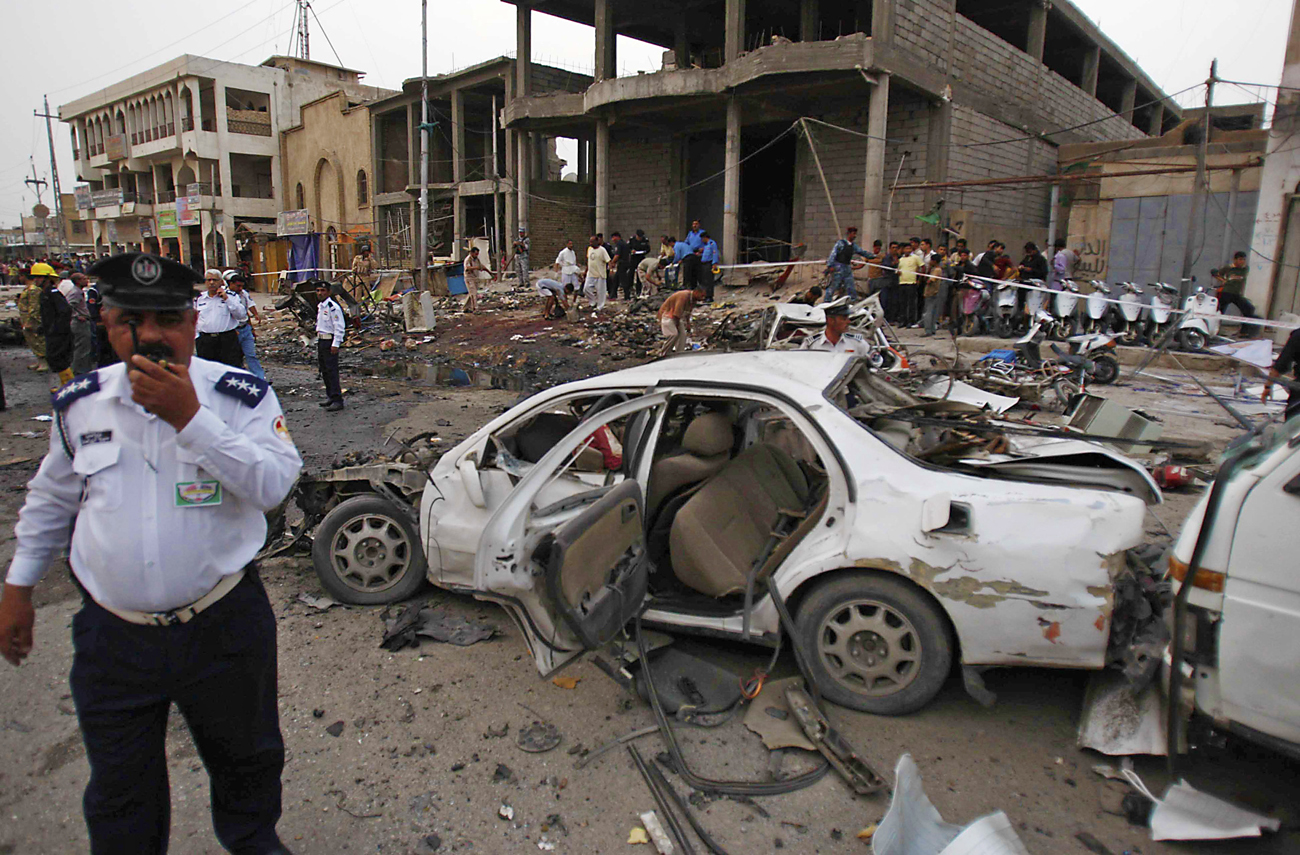 Iraq’s government blames Al Qaeda for more than 100 people killed across Iraq in the deadliest day of bombings this year. A suicide bomber blew himself up outside a textile factory on Monday in a provincial town near Baghdad, killing dozens in a crowd that had gathered after two car bombings at the same spot. Another three bombs hit the southern Shiite port city of Basra, killing at least 15 people, according to reports. The government says the terror group is stepping up attacks to exploit political instability in the country, more than two months after elections stalemated, leaving it unclear who will govern the shattered nation. The US plans to pull out half of its 92,000 troops over the next four months, which will leave Iraq even more vulnerable. Both Shiites and Sunnis were targeted in the latest attacks.

Photo: Residents and security personnel gather at the site of a bomb attack that occurred in Basra, 420 km (260 miles) southeast of Baghdad, May 10, 2010. Bombers and gunmen seen as linked to a battered but still lethal al Qaeda killed at least 80 people on Monday in a day-long wave of attacks on markets, a textile factory, checkpoints and other sites across Iraq. REUTERS/Atef Hassan

A remote-controlled submarine pumped chemicals into the ruptured Gulf of Mexico oil well 1,500 metres under water, as Black Hawk helicopters dumped one-ton sacks of sand on Louisiana’s barrier islands in a desperate attempt to protect the state’s wetlands against the catastrophic spill. The sub’s crew are attempting to disperse the slick gushing some 800,000 litres of oil a day into surrounding waters. Tests have been conducted to determine the impact of the chemicals on the environment, but the US Environmental Protection Agency admits that the possible effects are still widely unknown. Contractor BP earlier failed to cap the leak using a 100 ton containment box, and is mulling other methods to stop the gusher, such as plugging it with mud and cement. The drilling of a relief well is considered the most permanent solution. However, that’s expected to take up to three months.

Read more: WAFB, The Press and Journal, The Times

Britain’s Labour Party is desperately clinging to power after it was punished in elections last week. Prime Minister Gordon Brown says he’ll resign by September at the latest as both Labour and the Conservatives – which won the most seats in Parliament but fell short of a majority – vie to win the backing of the third-placed Liberal Democrats. But the Lib Dems’ are driving a hard bargain, by demanding an overhaul of the country’s voting system that favours proportional representation, which would greatly increase the number of seats they would hold in future. The 6 May election resulted in the first hung Parliament since 1974. The Liberal Democrats now have to decide whether to begin formal coalition talks with Labour, with whom they are more ideologically compatible, or strike a deal with the Conservatives out of a sense that the party won a moral mandate at a time Britain is going through economic turmoil. It’s a conundrum, with lots of bargaining to come.

Roy Bennett, long-time aide to Zimbabwean Prime Minister Morgan Tsvangirai, has been acquitted of all terrorism charges in a case that’s added strain to Zimbabwe’s uneasy coalition government. Bennett faced charges that could have got him the death penalty, stemming from an alleged plot to topple President Robert Mugabe. Tsvangirai’s opposition Movement for Democratic Change party has always maintained the charges were false, and that they were aimed at undermining real political change in Zimbabwe. Bennett is Tsvangirai’s choice for deputy minister of agriculture, but Mugabe had refused to swear him until the trial was over. Judge Chinembiri Bhunu ruled that the prosecution had failed to prove that Bennett and arms dealer Peter Michael Hitschmann had colluded to violently depose the government, saying Hitschmann was tortured into providing evidence against Bennett.

Karzai seeks backing for talks with Taliban during Washington visit

Afghanistan President Hamid Karzai wants US backing for quicker negotiations with Taliban leaders whose support for a peace deal is considered vital in ending the eight-year war in the mountainous country. Karzai is visiting the US at present, trying to mend relations with his allies after winning re-election in a vote tainted by allegations of widespread rigging. The US now believes Karzai is likely to rule over Afghanistan’s political future, as US-led forces seek to exit the conflict. But the administration of US president Barack Obama has shown no sign it’s ready to make peace with the Taliban, who sheltered Al Qaeda before the 9/11 attacks on the World Trade Center and Pentagon. Reports say Karzai will use highly-publicised meetings with Obama to try to convince Americans that his country is not a lost cause. The war remains in stalemate, as US military officials concede the Taliban is far from beaten.