Bono’s first 50 years: the music, the politics, the sunglasses 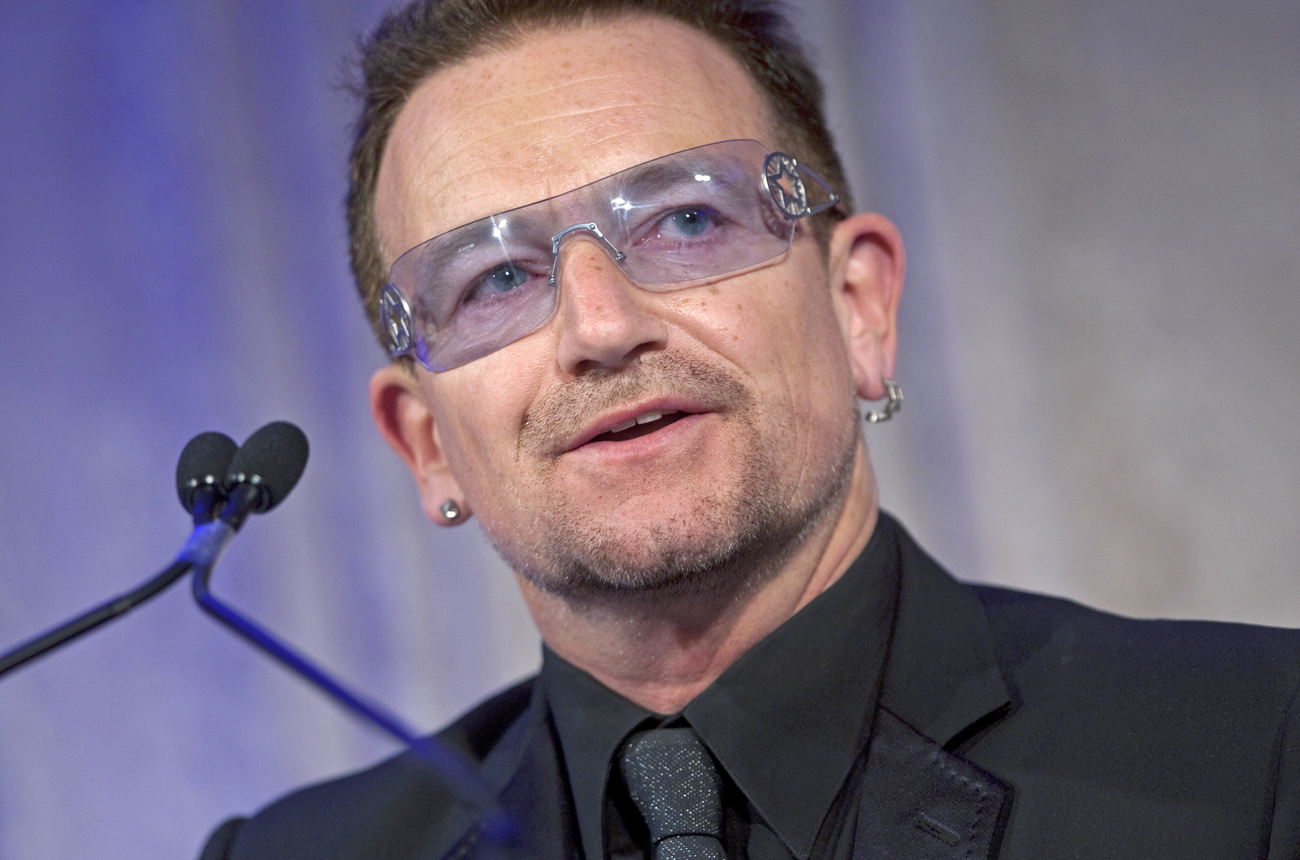 Hard to believe, but Bono’s already burned through his first 50 years on Earth. Don’t let those fresh looks fool you though. Having achieved godlike rock status he’s on to his next job: Saving Africa, ending poverty and the scourge of Aids. (The post of President of the Earth hasn’t been established just yet.)

As Bono turns 50, spare a thought for a man you’ve probably never heard of before. His name is Richard “Dik” Evans. In 1976 together with Paul David Hewson (Bono), Adam Clayton, and his brother David Evans (The Edge) he’d answer a newspaper advert stuck on a bulletin board calling for members for a new rock band. The four would audition, but soon after in a key moment of separating fortunes, Bono and friends would abandon doing cover songs in favour of writing original material and move on to form a group called U2. Dik Evans would choose to leave just before the formation of U2 to join a band called The Virgin Prunes.

The rest of the story is rock history. Dik would fade into obscurity, his only fame by proxy of his brother The Edge. Bono would become an overachieving legend. Not happy with global domination as frontman for one of the greatest bands of all time, or with being arguably one of the biggest singer-songwriters of his time, Bono, like Geldof before him, would put Africa on his list of “things to save”.

Born in an ordinary hospital to a working-class Dublin family on 10 May 1960, Paul David Hewson would be reborn as Bono thanks to his friend Gavin Friday and group of mates who were in the habit of giving each other nicknames. After several iterations Paul became Bono, and although he didn’t warm to the name initially, it sat more comfortably when he learned that Bono was a derivative of “bona vox” which translated from the Latin means “good voice”.

Watch: I Still Haven’t Found What I’m Looking for

When he was 14, Bono suffered a significant trauma when his mother collapsed and later died after suffering a cerebral aneurysm at her father’s funeral. The pain of this loss is evident in many of his songs, including “I will follow” which the group have played on just about every tour, becoming U2’s most frequently played number.

Watch: Frank Sinatra & Bono – (I’ve Got You) Under My Skin

Winner of 22 Grammy Awards, Bono pens most U2 songs which have ranged from the early inspired religious themes, to political statements to the more recent personal and self-deprecating. In 2005 with the rest of U2, Bono was inducted into the Rock and Roll Hall of Fame. Three years later Rolling Stone magazine would list him as one of the greatest singers of all time. Having sold more than 150 million albums, U2’s latest are less remarkable than the earlier hit spinners like “The Joshua Tree”, “War” and “Achtung Baby”.

Watch: In the name of love

Nowadays Bono’s focus is increasingly geared toward solving the problem of poverty, saving Africa and championing the fight against Aids. Like Sir Bob before him Bono travelled to Ethiopia after 1985’s Live Aid concert and was reborn as a self-styled superhero with the view that “every human life has equal worth”.

This has spawned a number of pop-styled Bono movements to end Africa’s woes including “The Campaign to Make Poverty History” and Product (RED). The latter is a consumerist-type fundraising campaign that encourages people to buy, buy, buy designer branded products to raise funds for Aids drugs in impoverished Africa. As Bono once said: “Rock stars always want to do two things. They want to have fun and change the world. If you can do both at the same time you’re okay.” Bono has won way too many humanitarian awards to mention here, but the bigger ones include being nominated for the Nobel Peace Prize in 2003 and an honorary knighthood from Queen Elizabeth II in 2007.

Thanks to his humanitarian efforts, Bono is now rubbing shoulders with global leaders, speaking at world economic forums and addressing political and economic heavyweights at platforms such as Davos. Nowadays the songwriter with “good voice” is telling world leaders how to be good and save the world. How will the rock god celebrate his half-century? According to the Irish press, he’ll be having an intimate do with a few close friends in New York. Oh, for a look at that guest list.

Read Paul Theroux’s opinion in The New York Times called The Rock Star’s Burden where he labels the likes of Bono as “mythomaniacs, people who wish to convince the world of their worth” while trying to “save the Africans by financing them in coffee growing and encouraging schemes to turn pianoforte legs and establish an export trade, all the while badgering people for money”.