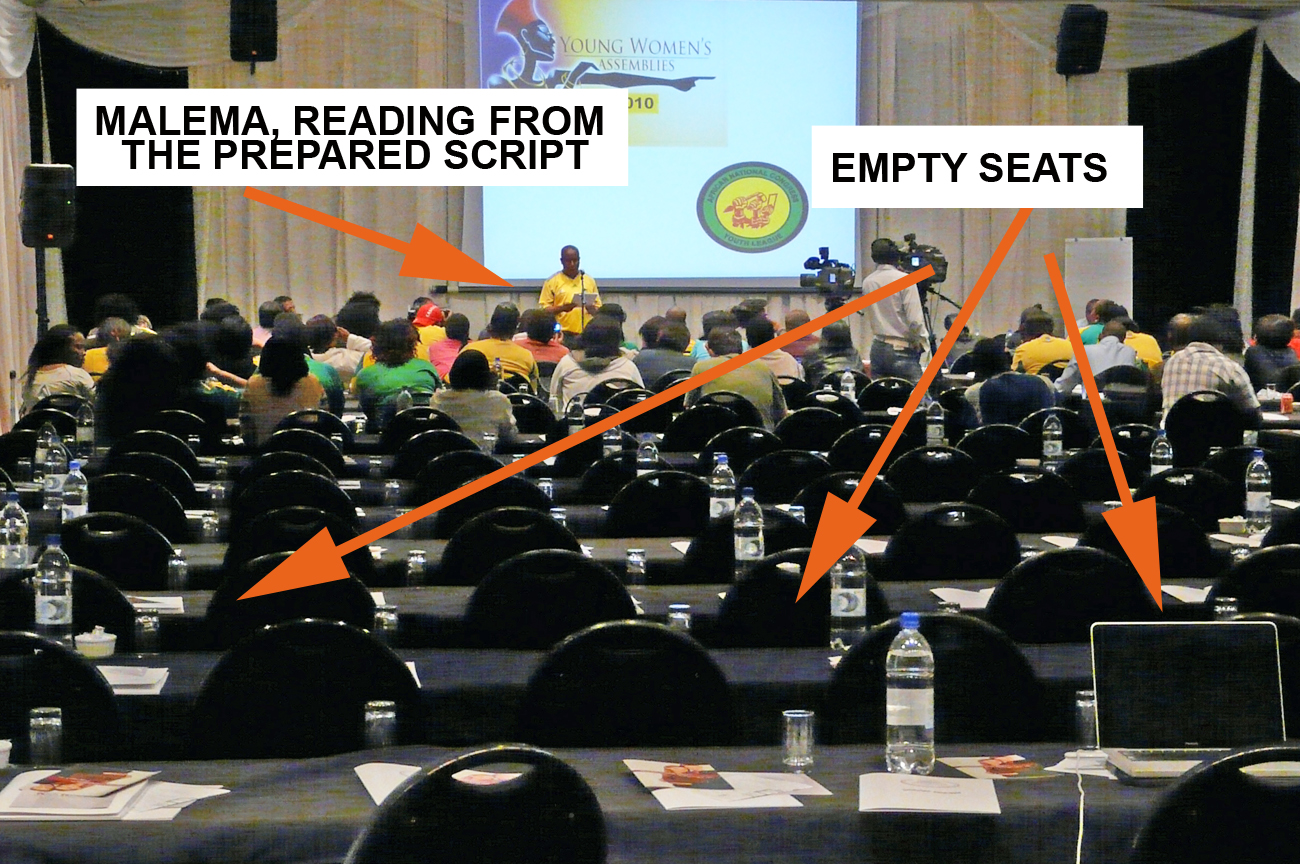 On Tuesday next week, Julius Malema is due back before an ANC disciplinary committee that is to decide his fate. On Friday, at a women's meeting of the Youth League, he implied that Jacob Zuma is a thin-skinned bully who is destroying the traditions of the ANC, and urged his members to fight, if a fight is needed to retain its independence.

Malema never mentioned Zuma, not by name and not by title. It just so happens that not a single person in the room could be in any doubt as to who he was thinking of. Especially not after he mentioned the Queen.

“Other people can go around the world, even to the Queen in Britain, to make assurances that mines will not be nationalised, yet the reality of the situation is that nationalisation of Mines is currently on the agenda of the ANC and will be resolved by the National General Council in September 2010 and National Conference in December 2012.”

That was the warmup. Then followed the history lesson.

“When Nelson Mandela called for an armed struggle it was not the policy of the ANC,” Malema said, reading word-for-word from a prepared speech, “but he was allowed the space to articulate why is making such a call… The leadership of the ANC did not seek to muzzle him.”

Photo: The cavernous space was empty.

From that explanation of how the “young lions” of the ANC were treated it was a short leap to current events.

“Nobody is a permanent leader of the ANC. All leaders of the ANC will come and go, and those who see us as a threat to their position have no right to threaten us with expulsion from the movement.”

Nor is Malema going into this fight alone. He urged his small audience to solidarity, warning that a failure to keep the League independent at national level would mean provincial and branch leaders could give “harsh conditions” from those who disagree with their ideology.

“You have a responsibility to ensure that you defend that which belongs to you,” he said, and then, later, “The autonomy of the Youth League needs to be defended at all cost.”

Keep in mind that, for Malema, that is pretty mild stuff. This is a man who does not shy away from ranting at his enemies by name. But he is also somebody who speaks off the cuff, except when reading a prepared statement. And in such cases his deviations from the script are much longer than the written document. On Friday, Malema read his piece and gave up the microphone. In our interpretation, that can only mean that his remarks were designed to skirt the edge – putting the disciplinary committee that is to decide his fate on notice, without giving his accusers extra ammunition.

It would also appear that Malema was very determined to make this appearance. The meeting, of female Youth League leaders from all over the country, was a complete shambles. Malema’s speech was delayed by five hours, because delegates had not yet arrived. By the time he started speaking, there were only 40 people in the room, compared to the 250 that were supposed to attend. During those five hours, we are told, he cooled his heels, at least part of it waiting to be called at the venue itself.

Then, before his address, he was made to sit through an impromptu fashion show and a lecture on female reproductive disease. Which, trust us, no man should have been subjected to without extensive counselling, both before and after. It could be that Malema realises he has to step carefully around the women in his organisation, given that he has been judged by the Equality Court to have engaged in hate speech against a (female) rape victim. But that’s just not how he rolls. We suspect he needed a forum in which to make this speech before the weekend. A forum under his control and one without time for questions.

The disciplinary committee members will find it hard to avoid reading about these comments over the weekend, and that may be the intention. But we don’t think Malema had them in mind. A long time ago our editor wrote about the “dog whistle politics” of the ANC. In this case, we believe, the intended audience was Malema’s constituency. He is rallying the troops.

Read the supposedly full text of Malema’s speech. (The written version, as supply by the ANC Youth League, is mysteriously missing some of the most controversial paragraphs that he read to his audience.)