07 May: World holds its breath as BP attempts to cap Gu...

07 May: World holds its breath as BP attempts to cap Gulf rig spill 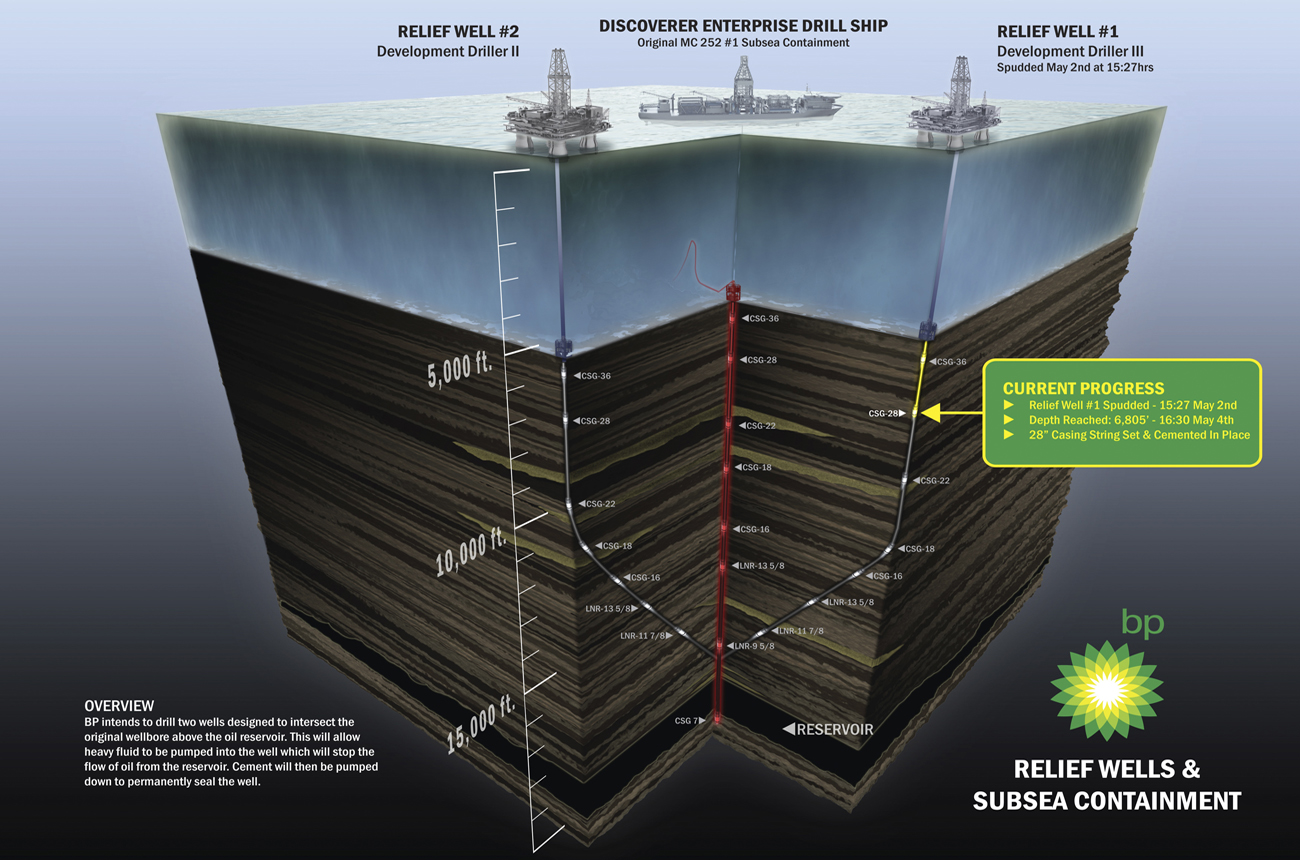 They built it fast because they had to. But now BP and the world are watching as workers lower a giant concrete-and-steel box over the Deepwater Horizon oil well gushing some 5,000 barrels a day of toxic slick from 1,500m under the surface of the Gulf of Mexico. The bid to cap the disastrous spill is untested at such depths, and if the containment device isn’t accurately positioned over the well it could further damage the leaking pipe and aggravate the problem. The idea is that a tanker designed to collect as much as 85% of the oil will be positioned on the surface, and a steel pipe will feed the oil from the top of the capping box into the vessel. There’s a danger of explosion when separating the mix of oil, gas and water, but if the box works, a second one, now being built, could be used to deal with a smaller leak.

Photo: This undated graphic, released on May 6, 2010, depicts BP’s plan to drill two wells designed to intersect the original wellbore above the oil reservoir and allow heavy fluid to be pumped into the well and stop the oil from flowing. The first oil from the massive spill in the Gulf of Mexico came ashore on a Louisiana island beach on Thursday as BP engineers prepared to start lowering a 98-ton metal chamber over the ruptured seabed well. REUTERS/BP/Handout

Britain’s Conservatives seem to have won the largest number of seats in the UK national election, but don’t have a majority, according to exit polls. That means a hung parliament, with the Tories projected to win 307 House of Commons seats – short of the 326 seats needed for a majority. Prime Minister Gordon Brown’s Labour Party is set to win 255 seats, and Nick Clegg’s Liberal Democrats 59 seats, far less than expected. Smaller parties won 29 other seats. Brown could resign if he feels he’s lost his mandate to rule, or he could seek a deal with smaller parties. The exit poll points to one of Labour’s heaviest losses since 1931, but the rules are that if it’s a hung parliament, the incumbent prime minister is traditionally given the first chance to form a government. Brown looks like he would need the Liberal Democrats to come on board, but there’s certain to be plenty of political wrangling.

Faisal Shahzad, the man accused of trying to detonate a car bomb in New York’s Times Square, says he drew inspiration from Anwar al-Awlaki, a Yemeni-American cleric who’s seemingly been a catalyst for several recent attacks and plots. Awlaki has been linked to both the Nigerian suspect in the attempted Christmas Day bombing of a US commercial airliner and to a Muslim US Army psychiatrist accused of shooting 13 people dead at a military base in Texas late last year. Reports say Shahzad asked his father’s permission in 2009 to join the war in Afghanistan. Following the bombing attempt, Pakistan’s Taliban released a video in which they pledged attacks on major US cities, also taking credit for the failed strike. Investigators now believe Shahzad was trained by the group after he reportedly told interrogators that he met with their operatives in Pakistan earlier, saying he later received explosives training from the same people.

It must have been an uncomfortable meal, after Iran’s foreign minister invited the US and 14 other member nations of the UN Security Council to dinner in an attempt to prevent the imposition of fresh economic sanctions over Iran’s nuclear programme. Reports say most nations sent a senior official, but not their top-ranking UN ambassadors, in what’s seen as one of the highest-level contacts in years between the US and Iran. The invitation came early in a four-week conference reviewing the UN’s Nuclear Non-proliferation Treaty, where Iranian President Mahmoud Ahmadinejad railed against new economic and military sanctions during the meeting’s opening. The US is leading an attempt to impose another round of sanctions against Iran, but China is holding out, claiming a diplomatic solution is best. The Japanese indicated there’d been no concrete outcome, but that there was a frank exchange of ideas. Ahmadinejad was the only head of state to attend the conference, showing how touchy Iran is on the subject.

Neanderthals left some of their genes in humans, according to the first detailed analysis of the Neanderthal genome. The DNA came from three fossil bones studied by biologists from the Max Planck Institute for Evolutionary Anthropology in Leipzig, Germany. The hairy and stocky hunters dominated Europe until 30,000 years ago, and the excitement comes as scientists changed their minds about whether Neanderthals and humans ever mated, having first reported no significant evidence of interbreeding. So far, the team claims to have recovered 60% of the genome, and has compared it with genes of present day humans. There’s not much overlap, but it seems about 1% to 4 % of the genome of non-Africans is derived from Neanderthals, after the two species split some 600,000 years ago.