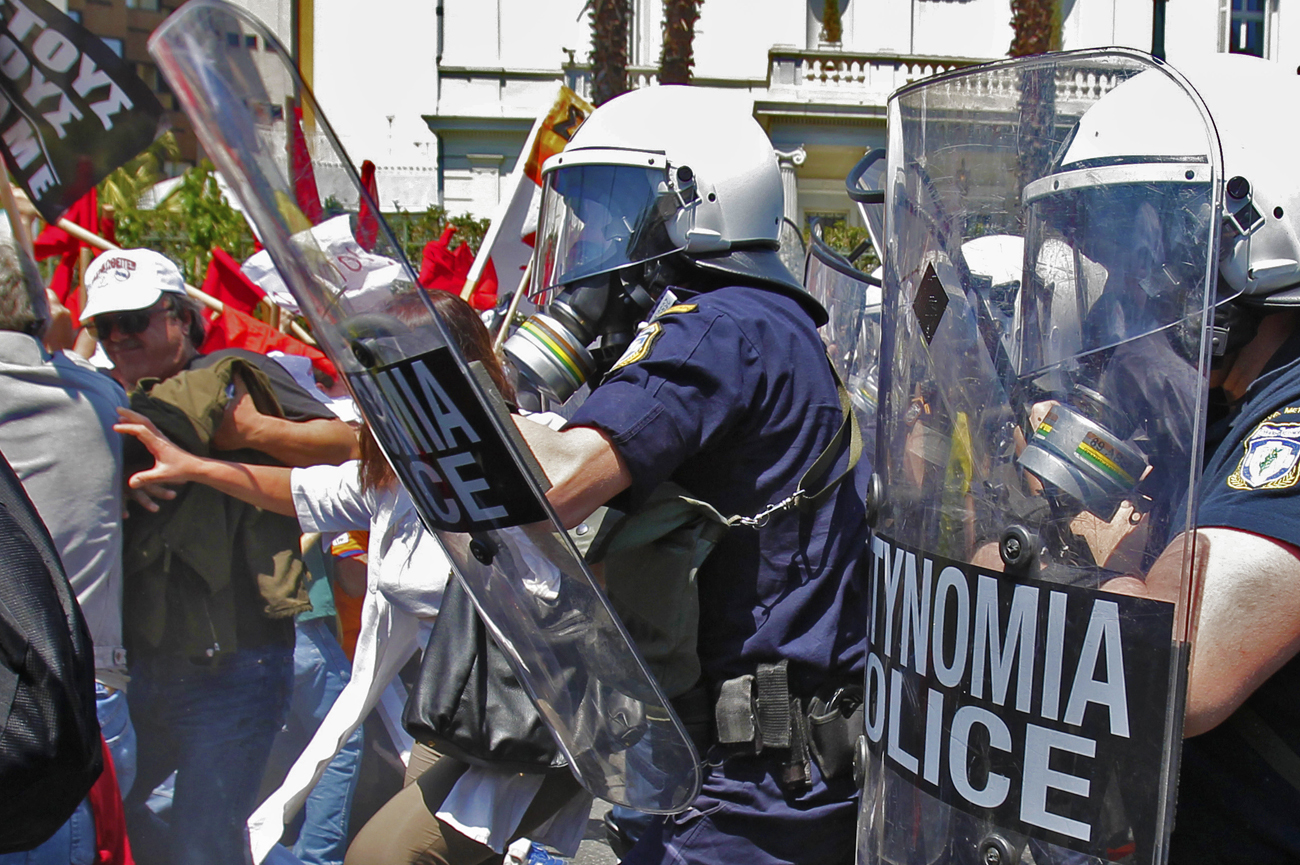 In a case of breathtaking defiance to reason, striking Greek public sector employees hung huge protest banners reading “Peoples of Europe – Rise Up” on the country’s emblematic Parthenon ruins as a prelude to a national strike planned for Wednesday. The world looked on in disbelief.

The banners and strike are designed to protest impending austerity measures that are the price of getting a €110 billion bailout from the EU’s Eurozone nations and the International Monetary Fund. The EU has agreed to about €80 billion, while the rest will come from the IMF, although these lifelines must still be approved by the parliaments of the other 15 members of the Eurozone. The day was also marked by other – largely peaceful – marches in Athens, although there were some scuffles with police.

After weeks of twisting and turning, bobbing and weaving, the Germans have finally come to the altar – albeit as a very reluctant bride. Their finance minister, Wolfgang Schäuble, said that besides public funds, the country’s private banks would be part of Germany’s contribution – a total participation likely to reach about €22 billion. German support for this kind of plan virtually demanded the kinds of Greek austerity measures that would not leave 65-year-old Germans still working (and paying for the plan through their taxes) while Greek civil servants could still retire in their mid-50s to bask in that healing Mediterranean sunlight.

Meanwhile, the Greek parliament is set to vote on these austerity measures later this week. These proposed measures would include new budget cuts of about €30 billion over three years to bring Greece’s public deficit below 3% of its gross domestic product by 2014 – from the current level of 13.6% –with an eye towards preventing Greece from defaulting on its national debt. On the specifics of the austerity measures, Greece’s Prime Minister, George Papandreou, said they would require “great sacrifices” that would include:

The need for the bailout and the austerity measures became increasingly clear as fears have been rising that a Greek default on its sovereign debt would put severe pressure on the finances of other EU nations like Italy, Spain, Portugal and Ireland. However, Greek union leaders insist that the cuts unfairly target lower-income Greeks. “There other things the [government] can do, before taking money from a pensioner who earns €500 euros a month,” said Spyros Papaspyros, the head of Greece’s public servants’ union. But, realistically, there seems little other choice for the Greek government (and the country).

Photo: Chief Executive of Deutsche Bank Josef Ackermann (L) and German Finance Minister Wolfgang Schaeuble address a news conference after a meeting in Berlin, May 4, 2010. German Finance Minister Wolfgang Schaeuble said after talks with Ackermann and other bankers, that a contribution from the German financial sector may mean that Greece would not have to tap all the aid on offer. REUTERS/Tobias Schwarz

Nonetheless, continuing global uncertainties about the specifics of the financing of the plan – and the ability of the Greeks to implement their austerity measures effectively – rocked the world’s stock markets on Tuesday as the euro hit a one-year low. A leading indicator for European blue-chip stocks fell over 3% on Tuesday, and the Dow Jones dropped by 2% in the face of persistent worries this debt crisis might yet spread to other European nations. US Treasury bond prices rose on increased demand for safe investments as a result.

In the face of this uncertainty, Spanish PM José Luis Rodríguez Zapatero felt the need to deny that Spain – despite being in its second year of recession, with its own soaring budget deficit and with an unemployment rate of 20% – might also end up needing a bailout of its own. Despite his public reassurance, the markets gave this “happy face” a “thumbs down” – the Spanish exchange dropped 5.4%, Athens’ went south by 6.7% and Portugal’s index fell nearly 4%. (So, where to with your spare cash now, besides that mattress: Dollars? Yen? Gold?)

What are the larger implications – beyond Greece’s travails? First of all, the most immediate impact will be on the 15 other Eurozone economies that have agreed to help out Greece; that is to say, taxpayers of these countries will effectively share a part of Greece’s burden. Then there are fears Greece’s troubles in the international financial markets will trigger a domino effect, toppling other weak members of the Eurozone, the so-called PIIGS – Portugal, Ireland, Italy and Spain, as well as Greece. All of these nations now face challenges rebalancing their own national debt books.

Ratings agencies have exacerbated fears with their increasingly dour assessments of national financial products, especially in the face of criticism they unduly gave high ratings several years earlier to some of the fundamentally unfathomable products emanating from those Wall Street firms. Downgrading national bonds (effectively forcing up the interest rates that must be offered to get anyone to hold them) from the PIIGS might trigger another sovereign debt crisis in one of the PIIGS, if a country can no longer raise the money to pay their bills.

From the vantage point of the current crisis, there is now a sense of shock by bankers, analysts and government officials about how it all went so wrong. As former Greek finance minister Yiannos Papantoniou said, “Now we are paying the price for the fact that we lived above our means, with amazing profligacy, and failed to reduce the role of the state.” The crisis was further nurtured by “hubris”, that wonderfully useful Greek term, on the part of European leaders whose goal of European economic integration, regardless of costs, allowed them to permit political considerations to trump economic realities.

Greece, emerging from military dictatorship in 1981, moved quickly to join the EU, ahead of much richer, more stable nations like Austria, Finland and Sweden – and five years before Spain and Portugal. Despite some demurrers, proponents of EU expansion won the field, arguing that bringing countries like Greece, Spain and Portugal into modern pan-European structures was the best way to consolidate these fragile democracies.

Then, generous EU subsidies helped bring Greece out of financial backwardness and, by 1997, as Europe prepared for the single currency, Greece with its steady economic growth of over 3% was hailed as an economic miracle. Unfortunately, there was always the shadow of those doctored national financial books lurking in the background, helping to raise the national debt. And now the markets are making the Greeks pay for the good times. As ever, first it’s the party, then the hangover.