03 May: Pakistan Taliban claim failed New York bombing, NYPD not so sure 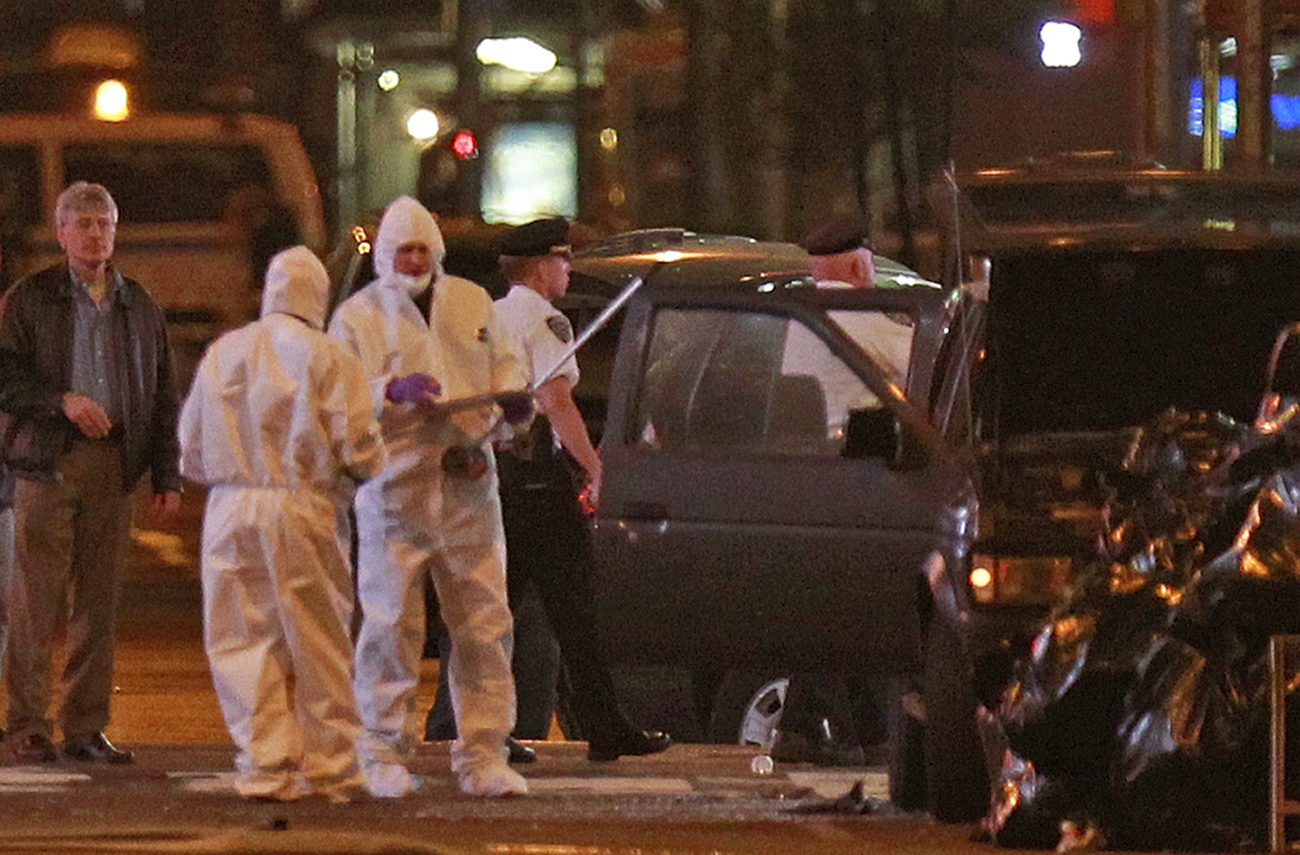 Pakistan’s Taliban released a video in which they vowed attacks on major US cities following a suspected car bombing attempt on New York’s Times Square. Reports say the group tried to take credit for the failed strike, but US authorities have played down any potential connection, despite the Taliban’s links with al-Qaeda and other terror groups. The video claims the attempted bombing was revenge for the death of its leader, Baitullah Mehsud, and the recent killings of al-Qaeda leaders in Iraq. Police in New York are focusing their investigations on a man videotaped near the SUV where the crude gasoline-and-propane bomb was found. They say the device could have sprayed shrapnel, killed pedestrians and broken windows on one of the city’s busiest streets. It’s thought the intent of the bomber was to cause casualties and mayhem.

Photo: Crime scene investigators examine a Nissan Pathfinder sport utility vehicle that was packed with bomb materials in New York’s Times Square, May 1, 2010. Police tipped off by a street vendor found and defused a car bomb inside a sport utility vehicle, thwarting an “act of terrorism” that forced the evacuation of New York’s Times Square on Saturday and could have killed many people, authorities said early on Sunday. REUTERS/Brendan McDermid

US President Barack Obama is warning of a potentially massive environmental disaster in the Gulf of Mexico as a sunken oil rig spews a toxic slick toward pristine wetlands on the southern Louisiana coastline. Obama took a helicopter ride over marshlands and estuaries to witness the threat from a 50km blanket of oil caused by as much as 800,000 litres of crude gushing into the Gulf each day, and spreading some 15km offshore. Louisiana’s fishing industry is under grave threat, and now the oil is floating toward beaches in neighbouring Mississippi and farther east along the Florida Panhandle. So far, oil contractor BP and the US Coast Guard, along with other disaster management teams, have been unable to stem the gusher emanating from some 1,500m below the surface. Obama says BP will pay all clean-up costs.

Thailand’s government says it will soon act to clear thousands of demonstrators from the centre of the nation’s capital, Bangkok, after nearly eight weeks of protests that claimed at least 27 lives, injured thousands and cost the country tens of millions of dollars. Prime Minister Abhisit Vejjajiva says the country’s armed forces are now in the process of locking down the area to remove so-called Red Shirt protesters from their encampment in the commercial heart of the city. The standoff has forced several upmarket malls and hotels to close in the popular tourist district, with police and military units seemingly unwilling to use harsh methods to end the demonstrations. Abhisit and military commanders deny the army’s loyalties are split over how to resolve the situation, with Abhisit claiming that troops and police clearly understand what needs to be done. The prime minister hasn’t yet given details of an announced plan to end the crisis, but said it didn’t include the declaration of martial law.

Greeks, IMF and EU move toward nailing down bailout

Greece has committed itself to years of austerity measures in signing a financial rescue plan with the EU and the International Monetary Fund, but the IMF says its executive board still needs to approve the bailout request for about $40 billion in loans. IMF managing director Dominique Strauss-Kahn says the Greeks have promised to make deep cuts in civil service salaries and benefits, while raising consumption taxes to record highs and reducing opportunities for tax evasion. Many observers fear these actions might not be politically sustainable over time. Greek unions have held unruly demonstrations in Athens, and the cost of the bailout is likely to make it impossible for Greece to grow its way out of its $410 billion debt. The IMF loans will be buttressed with financial aid from EU members, which fear that a Greek default would have enduring repercussions for the entire eurozone. There’s a general consensus that the Greek economy needs major structural reform, and this weekend’s deal is meant to give the government a couple of years of breathing space to execute that.

Israeli and Palestinian officials expect a new round of indirect, US-mediated peace talks to begin by early next week, pledging they would skip formalities and include preliminary discussions on core issues that bedevil their decades-long conflict. Details on the timing and scope of the talks are still to be finalised, after the 22-member Arab League gave the Palestinians the go-ahead for negotiations. Israeli Prime Minister Benjamin Netanyahu says he’s ready to restart unconditional negotiations at any time and at any place, despite earlier fears that the first talks since Israel invaded the Gaza Strip in January 2009 would by stymied by Israeli intransigence over settlement-building in the West Bank, and violence over barriers Israel is building in the area. The executive committee of the Palestine Liberation Organisation is expected to give a final endorsement this weekend for talks to proceed.