The world according to Jimmy Manyi and the Black Manage...

The world according to Jimmy Manyi and the Black Management Forum 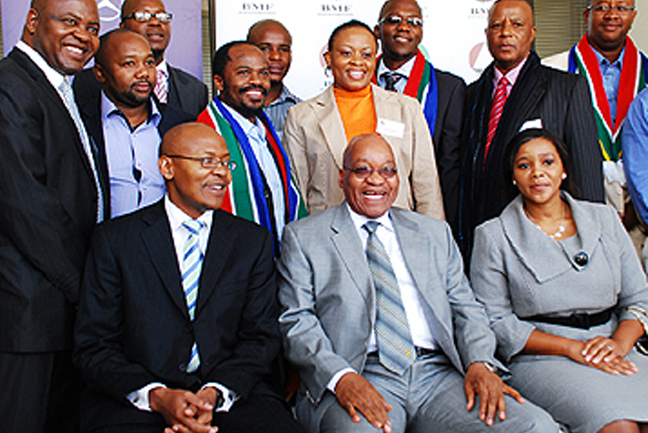 The recent Black Management Forum’s symposium on the Constitution highlights the growing influence of a group whose statements carry plenty of weight, but contain some frankly disturbing ideas.

It’s not every organisation that has the balls to publicly hold a discussion on the Constitution, and the “unintended consequences” of some of its provisions. And most groups would be willing to hear from virtually anybody in government. But for the Black Management Forum, President Jacob Zuma himself had to make the trip. And for once, he wasn’t the most interesting person in the room. That “honour” went to BMF president Jimmy Manyi.

A few clarifications here. The BMF is open to all races, and even has white executives among its members. Its mission: To help and support black executives in business. This is most definitely not a group of people that by any stretch of the imagination could be called racists. Rather, it is a group of people with identical interests.

And Manyi personifies that. He’s connected, holds down a pretty high-power government job as director general of the labour department and is hugely personable. He’s also one of the cleverest people this reporter knows.

Which is why it’s so disappointing when he stands up and speaks on the very issues he wants to examine in the Constitution. His comments about land are relatively sensible. He wants to discuss if Section 25 of the Constitution, the property clause, should be changed. He’s deeply unhappy that, in his view, it’s hampering land redistribution. He reckons that property values seem to magically go up whenever government starts looking at redistributing certain patches of land. He may have a slight point, but we would also point out that you play with property rights at your peril, in any system, in any country, ever.

Manyi’s also concerned about court cases involving transformation. He reckons government loses these cases in court. Those defeats set back the cause of transformation. It is obvious that he speaks for the entire organisation. He didn’t give examples though, and while he can rail against this all he likes, mucking about with judges is something the ANC hasn’t done too much of, and appears to be fairly nervous about doing so in the future. Still. We hope.

The issue of culture is also big for Manyi: He wants the amakhosi, the chiefs, to be respected. They have been largely taken out of present day South African politics, and he’s probably right to fight against that.

Manyi only spoke for about 10 minutes. Which tells you how he is able to get several points across in a very short time. He could show most politicians a thing or two about communication.

And what about Zuma? Land and redistribution were his big frustrations. It’s been said before, but when he says it, it should matter. The current willing-seller-willing-buyer model isn’t working, he says. There will be changes. But, crucially, he says this will happen within the ambit of the Constitution and the law. And for the umpteenth time, there will be no land invasions in South Africa. But there’s some small print. The law “must allow us to reach our goal of redistributing land”. Could the law be changed? Possibly.

But it was on the issue of culture where Zuma became really interesting. He wants to hold a national debate about what it is that makes a South African a South African. About what unites us as a country. About the cultures we have, and how we must respect them. And he makes a very telling point. He says some people feel “they have a right to criticise others”, that they can basically publicly scream and shout about other people’s cultures. He also says that other South Africans may disagree hugely with some aspects of other people’s cultures, but won’t say anything out of respect.

All in all, it seems unlikely anyone’s going to change the Constitution anytime soon. It’s a huge hassle to actually accomplish, which means it needs massive political will. And we can’t remember when we last saw much of that around here.

But let’s go back to Manyi for a second.

We felt the urge to stand up and scream when Manyi said that the right to “freedom of expression has been taken a tad too far”, because “the presidency is the most criticised body in this country”. Okay, then. He’s from the Thami Mazwai school of journalism. You know, the one that has presidential libel laws. Where, if you say something negative about the head of state, you can go to jail. Then there’s Manyi’s priceless “wherever you go in the world, you will see the office of the president being respected”. Really? Which world is this? Because it sure as hell isn’t on good old Earth. Does he remember Bill Clinton during the Lewinsky affair? Would he have preferred Nixon to remain president and Woodward and Bernstein to go to jail?

How about looking at why people come to disrespect the president. Maybe because of some of the foibles of two of the people to have held that office recently. And while he’s at it, would he like to see a Julius Malema going to jail for “disrespecting the president”?

It’s just intellectual nonsense of the lowest order to think that people should not be allowed to criticise any office in the land. It’s puerile to claim that this doesn’t happen in other countries. It absolutely does, and it just shows how pathetic your argument is when you have to make up facts that are so easy to disprove by anyone with 30 seconds to spare and access to Google.

The BMF is a political organisation of business people. Where it pokes its nose, it can inflict plenty of damage. Remember its press conference to support Jacob Maroga, and its racialisation of the Eskom fiasco? How it played lowest of the  low politics with our electricity, because one of its own needed help?

What is disturbing though is that this organisation, by default the top representative of the business side of an entire new class, is not beyond moves to win short-term victories that can harm this country in the long-term.

It is beyond logic that the top black management organisation doesn’t mind the system of deployment by government, or other big levers of power. Like most organisations, we understand the BMF wants to expand its empire, but at what cost?

The BMF obviously has determined people with brains and balls. And in a country where business and politics are often the same, it is an organisation to watch.