The hills are alive with the sound of Enron

The hills are alive with the sound of Enron 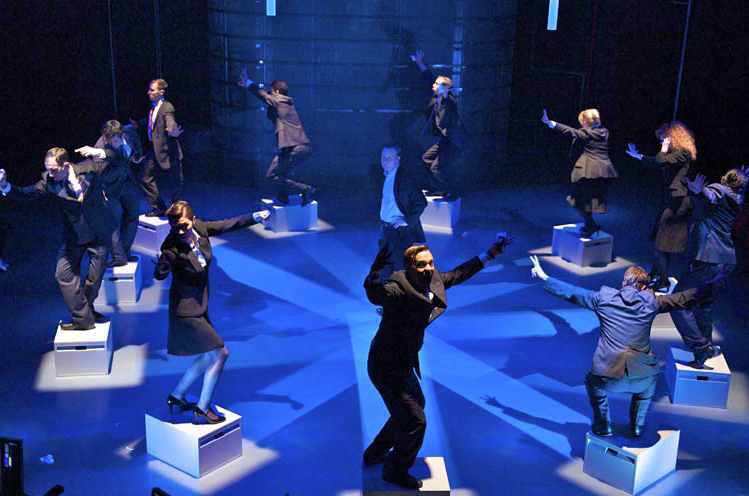 But, as former Enron prosecutor Andrew Weissmann told Bloomberg, “When I heard they were making a musical about the company, I thought, what a joke. It’ll be like ‘Springtime for Hitler’.”

Times Online writer Lucy Prebble thought otherwise and mixed derivatives and hedge funds into a tragic musical resplendent with light-sabre dances and dinosaurs. She believes the songs and scams will capture audience attention. Strangely enough, she’s right and is now one of the few people to profit from the downturn.

The global recession forms a fitting context for English theatre fans who’re going in their droves to feast on the site of greedy American business mavens singing, dancing and getting their come-uppances. After a sold-out run at the Royal Court last year, the show transferred to the West End.

Not yet 30, “Enron” is Prebble’s second play though first big hit. “The second draft had every credit-default swap described. But what was interesting was that, because I’d not been afraid to do that, there was some good metaphorical stuff,” Prebble told Times Online. Eventually she would go on to write 12 drafts. “On my computer, whenever you open up the folder of documents, they’re just ‘Enron 1’, ‘Enron 1.2’. It just goes on and on and on. It’s 90% of the memory on my hard disk.”

Prebble got sucked into the Enron story two months after the scandal broke in October 2001. “I was so frightened at the idea of it being dry. I mentioned it to a couple of people, both professionally and socially, and it didn’t get a lot of response because they either didn’t know about Enron or the world didn’t seem that interesting to them.” Luckily for Prebble it was the latter. Dry accounting and trading terms aside, the Enron story intrinsically had all the ingredients of a slam dunk. Gordon Gekko reincarnated as a real live villain called Jeff Skilling. The overnight destruction of a company Fortune magazine once called the “Most Innovative Company in America”. Record-breaking fraud. Lies. Manipulation. Deceit and death.

Cliff Baxter was the character who died. A man in search of fulfilling the American dream by becoming a Texan millionaire, Baxter climbed the ranks of Enron and made millions from stock. However, he was largely known as a good sport who tried to protect his people from Enron’s cut-throat culture. Baxter wrote the memo alerting Skilling et al of the financial chicanery that was the company’s undoing. His efforts dug his own metaphorical and literal grave. Baxter was sidelined by Skilling and his cronies, and would later be called to testify before the US Congress. He never appeared. Instead he parked his luxury vehicle between two road medians and shot himself in the head with a .38 revolver. His suicide note cited Enron. Conspiracy theorists would later quote top cops as saying that Baxter’s death was murder.

Hoping to capitalise on the UK’s success Enron opened this week on Broadway where it received a tepid reception with influential US reviewers who said Enron the play had as much substance as Enron the company.

The New York Times’ Ben Brantley called the show a “flashy but laboured economics lesson” saying:  “The realisation sets in early that this British-born exploration of smoke-and-mirror financial practices isn’t much more than smoke and mirrors itself. “Enron” is fast-paced, flamboyant and, despite the head-clogging intricacy of its business mathematics, lucid to the point of simple-mindedness. But as was true of the company of this play’s title, the energy generated here often feels factitious, all show (or show and tell) and little substance.”

That given, it looks as if “Enron” the musical might follow Enron the company on home ground, fold fairly soon and go dancing down the drain. Or plain crooked in the key of “E”.

If you haven’t been put off by Brantley’s review read more about Enron (the play, not the company) at Variety, The New York Times, Guardian and Reuters.