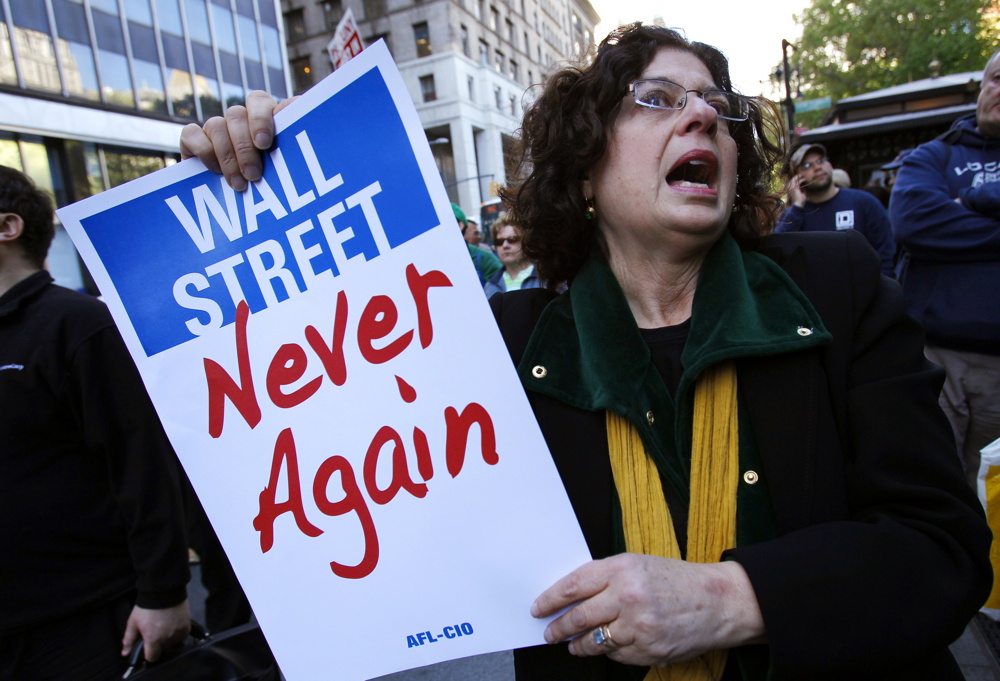 Also today: RBS chairman says bankers paid too much, but that’s how it has to be; European Commission’s Barroso makes hopeful noises over Greek bailout; Congress set to legislate sweeping changes to American car industry; United and Continental in ‘advanced’ merger talks.

America’s AFL-CIO umbrella labour body led several thousand demonstrators through downtown Manhattan’s financial district, protesting against record profits earned by Wall Street’s biggest banks, as average Americans continue to suffer financially. There’s renewed public anger over banks tightening up lending practices, while giving their staff billions of dollars in bonuses. The march came as the US Senate began debating reforming the country’s financial system, and days after lawmakers grilled executives from Wall Street investment bank Goldman Sachs over its dodgy sales of subprime mortgages. The unions say big banks ruined the US economy, and then took billions of dollars of taxpayers’ money, claiming they should pay to clean up the mess. The ongoing public outrage is one reason that Republicans just gave up trying to filibuster changes to the way Wall Street is regulated, including reforms in derivatives trading, the exotic and opaque financial instruments blamed for much of the 2008 markets crash.

RBS chairman says bankers paid too much, but that’s how it has to be

The times they are a changin’ for banks. The chairman of the Royal Bank of Scotland, which is 83% owned by taxpayers after it was bailed out by the UK government, says many bankers earn too much. Sir Philip Hampton said it was difficult to reconcile the huge disparities between what most people earned and the astonishingly high pay some bankers received. But he added banks had little choice, but to provide monstrous salaries and perks to keep their best staff. Sir Philip obviously has one ear tuned to the public clamour, after Britain’s government shovelled $70 billion into RBS during the global financial crisis, pledging to listen to investor concerns over a new bonus scheme for RBS’s top execs. A quarter of the lender’s performance-linked rewards are triggered when RBS’s share price hits 76cUS – a target that’s already been reached – causing shareholders to call for assurances that performance rewards will be toughened up.

There’s still plenty of smoke and mirrors over a Greek bailout, despite European Commission president Jose Manuel Barroso claiming that a multibillion-euro aid package for Greece will be struck within days. So far, Europe has done little to calm market nerves, with earlier talk of a $60 billion rescue deal failing to materialise into anything substantial. Greece has some $410 billion in debt, and is running a 12.7% annual budget deficit, but the EU (especially Germany) is playing hardball, saying debt restructuring is not an option, and that harsh spending cuts and higher taxes are the solution. Greece has complained that it can’t do this, while paying the high risk premium it’s being charged on market borrowings. Barroso says he doesn’t doubt Greece’s needs will be met before a possible default on its debt, although the International Monetary Fund and EU have yet to negotiate details of a bailout, and that could further damage the fragile euro currency and make life very difficult for other indebted EU countries, including Spain, Portugal, Italy and Ireland.

The US Congress is readying sweeping legislation to revamp vehicle safety regulations and boost fines against car makers for violating safety laws. Toyota’s woes over its sudden acceleration problems have sparked a frenzied response in an area of American legislation that’s widely seen to have been overlooked in recent years and deeply under-resourced. Lawmakers want all new motor vehicles to have data recorders and brake override systems to enable national highway traffic safety administration officials to better protect the public. The new Motor Vehicle Safety Act of 2010 is one of the biggest overhauls of federal motor vehicle safety regulations in decades. And car makers will be very unhappy over a provision that seeks to remove the existing $16.4 million limit on fines against vehicle manufacturers, creating the potential for fines running into tens of billions of dollars. The measure has several other provisions, including a new tax of $9 on each new vehicle payable by the manufacturer, to help fund traffic regulatory authorities, raising some $100 million a year based on current US vehicle sales.

Days after talks failed between United Airlines and US Airways, United is reported to be in advanced talks with Continental Airlines over merging the two carriers. Combining the airlines would create the largest US airline by revenue, ahead of Delta Air Lines, which recently merged with Northwest Airlines. Reports say the new company would be called United, with Continental chairman Jeffery Smisek as CEO, and United chairman Glenn Tilton, the new non-executive chairman for two years. After that, Smisek would become executive chairman. Negotiations stalemated last weekend over what stock prices would determine a stock-for-stock deal. Carriers are desperate to gain economies of scale, after the Great Recession battered the industry and an Icelandic volcano recently shut down European airspace for a week. The new carrier would be based in Chicago